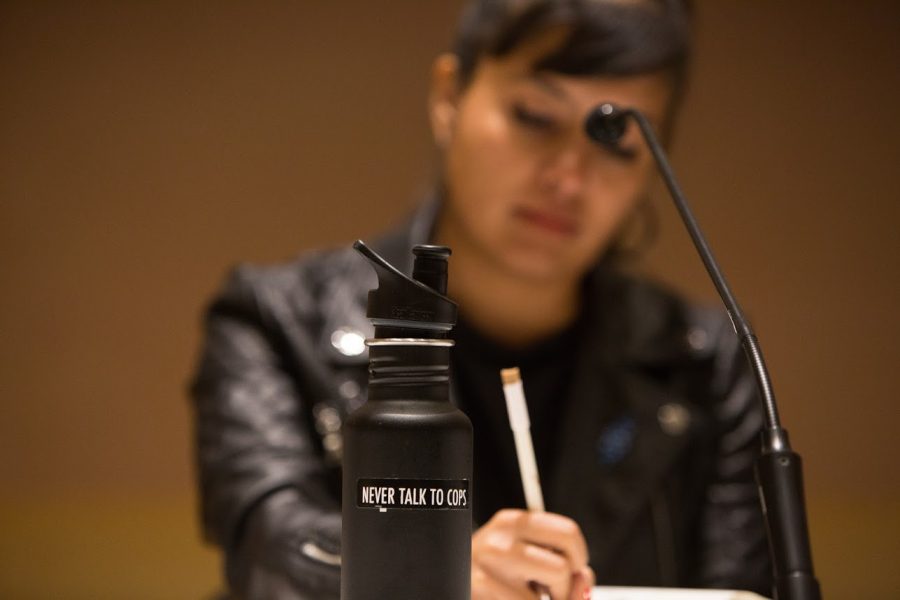 Activist Barbara Suarez Galeano takes notes as other co-panelists speak at the Immigrant Justice Panel at the Knight Auditorium on Thursday. She argues the Department of Defense needs to stop cutting funding from Immigration and Customs Enforcement.

Activist organizers discussed their work in immigrant justice movements and analyzed it through the lens of abolition democracy Thursday.

Abolition democracy is the concept of dismantling negative power structures such as incarceration and mass surveillance, and instead reinvesting in building positive structures needed to ensure collective well-being, such as free education and healthcare.

The Immigrant Justice Panel was cosponsored by the Center for Advanced Study and hosted a panel of activists with experience in immigrant justice movements. Most notably, many have experience in grassroots organizing against deportations and the criminalization of immigrant communities.

The event started with panelists discussing how they became involved in their current work, as well as important strategies about organizing they have learned.

Panelist Barbara Galeano, organizer for the Detention Watch Network which aims to end immigrant detention, talked about her experiences in working to dismantle detention centers. This includes aiming to stop the Department of Defense from funding Immigration and Customs Enforcement.

Another panelist Carlos Ramirez-Rosa, University Alumnus and Alderman of Ward 35 of Chicago, remembers being an undergraduate student in 2010 and fighting against Secure Communities, a deportation program that depended on the partnership of federal, state and local law enforcement. This was the start of his involvement in anti-deportation work.

Now, Ramirez-Rosa represents an overwhelmingly immigrant and Latinx community, and is working on using local resources to stand up to the “deportation regime.”

Abolition Democracy is a phrase coined by Angela Davis, a well-known social activist.

“(Abolition democracy) is about imagining a world without prisons. But it’s not just about trying to get rid of what we have, it’s about also trying to create something new,” Beauchamp said.

Beauchamp noted that in his field of Gender and Women Studies, there’s often a strong push toward ideas like building more prisons and cracking down on crime to keep women safe. From the view of an abolitionist framework however, “prisons don’t actually keep us safe. They create harm instead of preventing it,” Beauchamp explains.

Rey Wences, another panelist and organizer for Organized Communities Against Deportations, understood this concept when his team’s investigations lead to the discovery that ICE officials were using a compiled gang database in Chicago to target people and conduct home raids. Wences and his team pushed for transparency and accountability in light of this discovery.

According to a report released by Joseph Ferguson, Inspector General of Chicago, “over 15,000 individuals designated as gang members by (Chicago Police Department) had no specific gang membership listed and no reason provided for why the individual was listed as a gang member.”

As Galeano points out, dismantling the current framework is only part of the battle.

“How are we really reallocating resources away from agents of state violence and towards the replenishing of our communities?” Galeano said.

In the context of Champaign-Urbana, this idea can have real implications.

“The Champaign school district just invested all kinds of money into campus police,” said Paik. “Campus police is one of the fastest-growing sectors of the police agencies nationwide. So, not doing that anymore. Not investing in state surveillance, police and prisons. You have to build up the institutions and the relationships and the structures that will maintain healthy communities where peoples’ well-being is centered.”

“It’s a time when many people are looking to imagine a better world and to have the tools to do that and the models for that,” Beauchamp said.