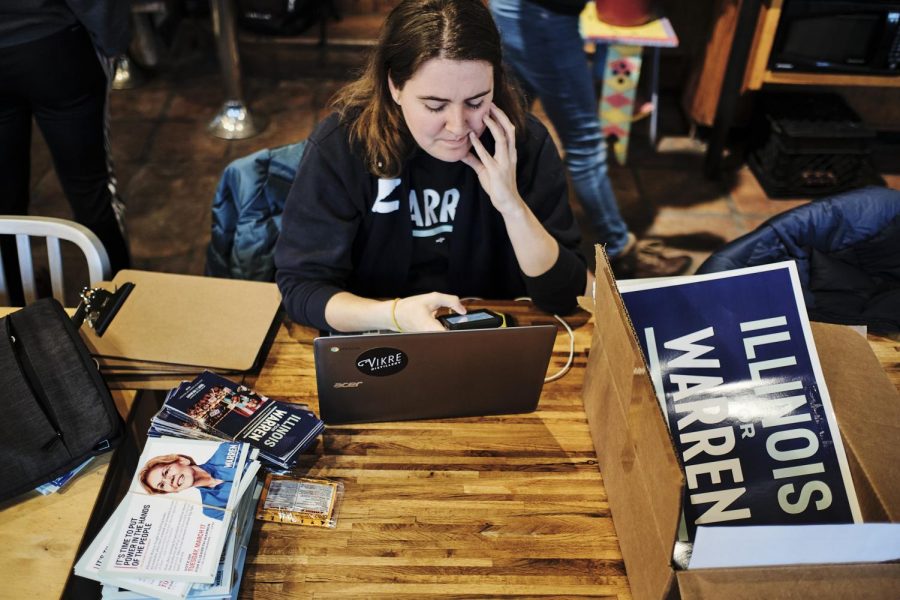 Ahead of the Illinois primary in March, two RSOs are getting the word out for candidates in the progressive wing of the Democratic Party.

Members of Illini for Warren and the UIUC Young Democratic Socialists of America canvassed in Iowa for presidential candidates Elizabeth Warren and Bernie Sanders, respectively. Both RSOs are ramping up outreach efforts on the Illinois campus, using divergent strategies to reach local voters.

For Jake Sepich, senior in LAS and president of Illini for Warren, he and other Warren volunteers are going the traditional route by knocking on doors and handing out fliers every weekend, even if the college setting makes things difficult.

“The biggest thing about canvassing students is it’s really hard,” Sepich said. “Students are really hard to find because they move every year.”

Even if Champaign County provides updated addresses, Sepich is often stymied by apartment buildings that have limited-access elevators or need keys to enter.

Regardless, Sepich is pushing through. He’s camped out at Caffe Paradiso the last few weekends to talk with customers, and his RSO is planning an early voting event on March 2.

Meanwhile, the University’s YDSA chapter is following instructions from their national organization: Register as many students as possible.

“It was their recommendation that since college students already overwhelmingly lean Sanders, just get people registered and that’ll be enough,” said Neeraj Kumar, YDSA member and junior in Engineering. “(There’s) no need to convince people; just bring them out.”

According to Kumar, YDSA registered over 100 students to vote last semester. Instead of door-to-door canvassing, members have found more success talking to voters between classes, often at bus stops and dining halls.

During winter break, Sepich canvassed for Warren in Decorah, Iowa, a rural town of about 8,000 people in the northeastern corner of the state.

“The biggest thing was how civil everyone was, even the people who were Trump supporters and didn’t want to talk to me,” Sepich said. “They’d always be very, very polite.”

Members of both RSOs met their favorite presidential candidates. Kumar got to shake Sanders’ hand at an event earlier this month. Sepich met Warren at the end of a volunteer session.

“She’s very impressive — just as energetic in person as you’d see on TV or on Facebook,” Sepich said.

Iowa intended to use the IowaReporter app to track early voting results, but its failure caused substantial delays in the caucus process.

“I’ve done my share of app development with my degree; to create something that messes up so badly is a real accomplishment, and I’ve failed my machine problems before,” Kumar said.

“Anyone who’s a registered voter in Champaign County will be able to vote at that location, but it’s primarily going to be students who are leaving (for break),” Ammons said. “The impetus was to make sure students have access that they deserve.”

“It’s extremely important for the University, for student organizations, for candidates and even the local parties to share information with the students about all the places that they can vote on campus to try and avoid the bottlenecks that occurred in 2018,” Ammons said.

Ammons encourages students to vote in their hometown if they’re paying attention to a “heated race.” Otherwise, Ammons said students should make use of the early voting options on campus.

“If they’re here, and this is where they’re going to spend nine months of the year, they’re going to be affected by the laws and policies that are determined here and they should exercise their right to vote here,” Ammons said.