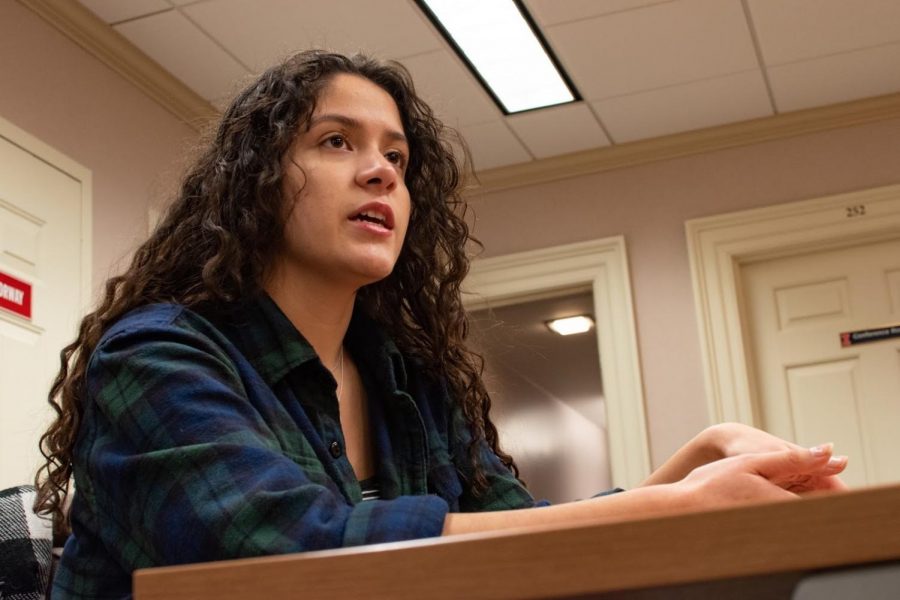 Nataly Esparza, junior in LAS and assistant to the director of governmental affairs, answers some inquiries about the resolution she wrote on Friday. The resolution is titled “At Risk of Losing the House.”

Along with the new decade comes, for many of us, a new civic duty. The 2020 census is right around the corner, being distributed in March and taken in early April. The main purpose of the United States census is to count the entire population of the country and where each person lives.

The Illinois Student Government is taking particular interest in this decade’s census to help avoid a potential loss of seats in the House of Representatives.

“There has been a lot of population distribution with people moving out of Illinois,” said Kirsten Peterson, senior in LAS and ISG Director of Governmental Affairs.

Because the state has seen many people move away in the last 10 years, Peterson said it is more important than ever that all Illinois residents fill out the census to make sure the population count is not seen as dropping, thus keeping the same amount of members in the U.S. House of Representatives.

For this reason, Nataly Esparza, junior in LAS and Assistant to the Director of Governmental Affairs, has introduced a resolution titled “At Risk of Losing the House,” which is a campaign designed to educate those around campus and Champaign-Urbana community on the importance of filling out the census and avoiding underrepresentation.

“If over 50,000 people don’t fill (the census) out, we’re at risk of losing two seats in the House of Representatives,” Esparza said.

In addition to the possibility of losing representatives, there are also certain monetary losses the state can suffer. According to Esparza, for every person that is not counted by the census, $1,400 worth of federal funding is lost per year, meaning $14,000 is lost per person until the next census. So far, Esparza has seen mostly support for her resolution.

“I feel like students actually want to learn,” Esparza said. “This is the first census that us students are actually aware about, along with the risks and consequences of not filling it out.”

Esparza has seen some undocumented students avoid filling out the census due to the push by the Trump administration to add a citizenship question to the 2020 census. However, there is no such question because federal judges permanently blocked the administration from adding this question. Not only are undocumented students not at risk, but they stand to gain from the census just like citizens.

“If you are not a citizen, you should still fill out the census because you are still paying taxes on the things you buy,” Peterson said. “Those things still impact you, and you want them to be reflected.”

One of the main goals of this resolution is to help get the word out to those undocumented students and students from low-income backgrounds because many organizations created to help them are state-funded and based on data received from the census.

Esparza and Peterson’s overall goal with this resolution is primarily education and making students aware of the census. They also want to encourage students to list their residence in Champaign-Urbana and not back home, as students spend more time at the University and want the census to accurately reflect the population. While students will generally only be at school for four years, other students will take their place throughout the decade.

“The student population reaches all throughout Champaign-Urbana,” Peterson said. “We’re not just students. We work as research assistants or at Starbucks. We work all across the community. We impact a lot of the restaurant culture and bars. We have a sizable impact on the community, and we deserve representation for that.”

Their plan is to host panels or events in ways that give them the ability to present this information to students and community members. Esparza said she has plans to work with the University YMCA and cultural houses to organize a large campaign, especially for students from marginalized communities and low-income backgrounds.

“We want (students) to understand what the census is because many might not know,” Peterson said. “We want to make sure students have the tools to be as civically engaged as they can be.”