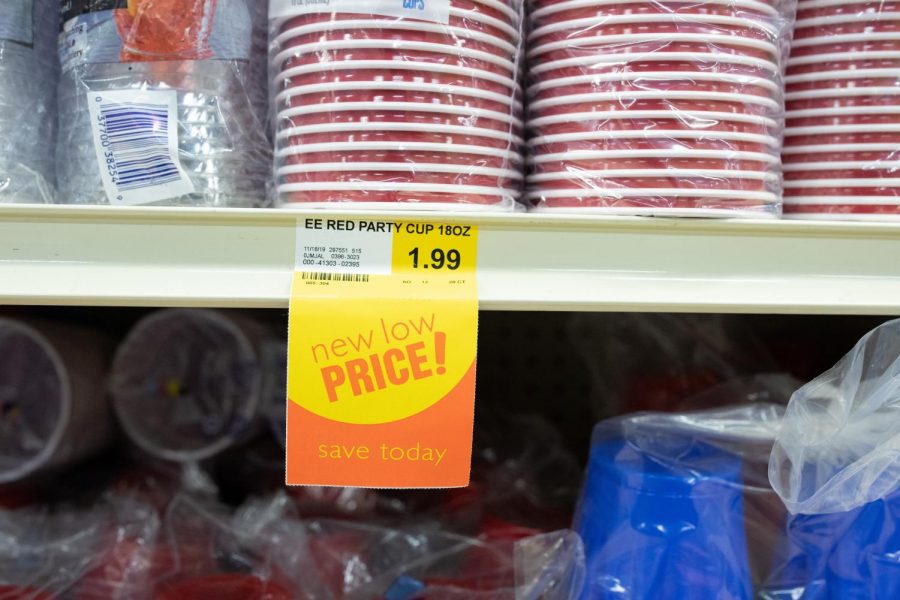 A price tag hangs beneath red plastic cups at County Market on Sunday. A video on Reddit accused the store of charging “discounted prices” that ended up being more expensive.

At the end of January, a video of falsely discounted prices from the local County Market grocery store on Stoughton Street surfaced on Reddit.

In the video, a shopper was looking at products with tags displaying “new low price.” The shopper then lifted up the updated label to reveal the products’ original costs, which were shown to be cheaper than the discounted prices tag.

The post was titled “Careful shopping at County Market, these are some shady practices.”

The subject gained popularity quickly among students, generating nearly 500 interactions on the site, including comments where various users voiced their opinions on the topic.

Gerry Kettler, director of Consumer Affairs for Neimann Foods, Inc., the company that owns County Market, said this issue was just a result of human errors.

“It was brought to our attention; the tags were changed,” Kettler said. “If anyone bought something, just bring a receipt, and we’ll refund their money … simple as that.”

Due to its convenient location near many campus apartments, County Market is a frequent shopping destination for students.

Christopher Kim, sophomore in LAS, filmed and uploaded the video. Kim said shopping at County Market is more convenient in terms of location.

On the day Kim found the prices, he was shopping at the store with friends when he noticed some sale tags. Out of habit, he checked underneath the discounted listing to see how much the savings totaled up to.

“A lot of times they will take away the secondary or original tag … I was just amazed that they left it like that,” Kim said. “Then I did take a video and send it to a couple of friends and decided to post it on Reddit later.”

Following the discovery of the prices, Kim and his friends decided to look around afterwards and discovered more.

“On the ones that I found, the sale tag said that it was more than the original item,” Kim said. “But the ones that we found after said they were on sale, but it was actually for the same original price.”

In the comments on the post, many students chimed in to share their thoughts on the store, with some labeling it “overpriced” and calling out the store for its “false advertising.”

Caleb Cole, sophomore in Engineering, also said he is a frequent shopper at the market because it is the closest option.

“Prior to seeing the post, I already knew that County Market was overpriced,” Cole said. “I (can’t) wait to start shopping elsewhere when something else opens.”

With the new Target opening later this year on Green Street, students will have access to more supermarket selections, possibly affecting the business at County Market.