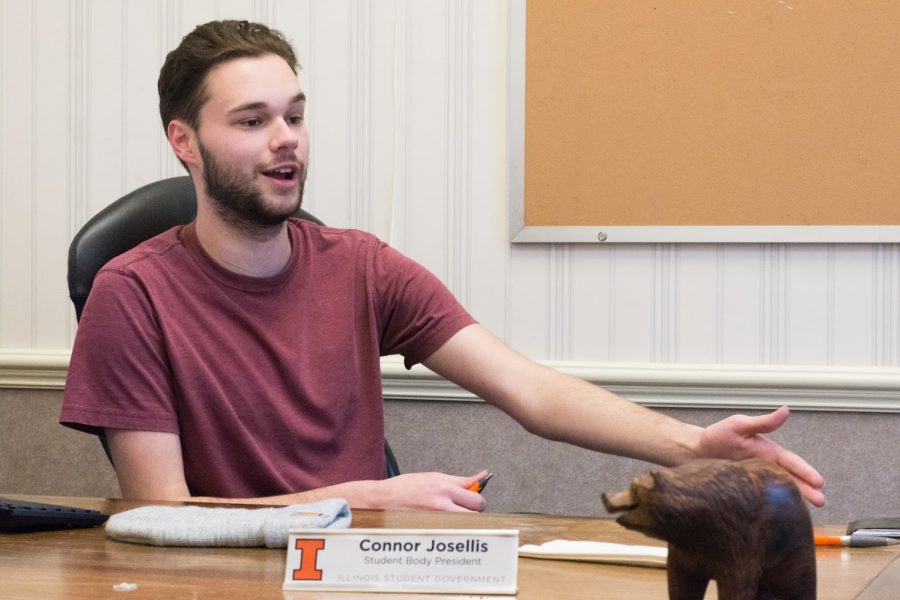 Student Body President Connor Josellis, pictured in his office at the Illini Union, speaks about the procedure of the upcoming Illinois Student Government election and the candidates running for office. He suggests running an in-person and online campaign to reach voters.

On March 4 and March 5, the campus-wide student elections will fill positions for the 2020-21 school year. The positions up for grabs are the Illinois Student Government president and vice president, ISG senators, Urbana-Champaign senators, student trustee members and Student Organization Resource Fee Board members. The presidential race is one of the more hotly contested elections.

“Running for ISG president and vice president is always very interesting,” said Connor Josellis, junior in Media and current ISG president. “It’s a big time commitment, running a campaign. The year I ran, there were three other tickets, which is more than usual. It lent itself to a pretty competitive campaign.”

Josellis said candidates for president should run both an in-person and online campaign because there are always people you might miss using just one of these outlets.

Josellis also advised to communicate with clubs and societies associated with the position they’re running for. If a student is running for a senate seat for Engineering, for example, they should reach out to engineering fraternities.

Josellis also made it clear that he would not be seeking reelection for next year’s term.

“I don’t want to leave knowing that I have unfinished business, but a certain part of this job is trusting that others will continue on what you’ve started,” Josellis said.

“We have streamlined the application process and encourage students to campaign broadly,” said Gina Lee-Olukoya, associate dean of students and adviser to CSEC.

One of the biggest changes to this year’s elections process is the implementation of ranked choice voting. This is a system in which voters use a ranked ballot to rank candidates in a sequence on an ordinal scale.

“It lets those people vote for who they truly believe in while still knowing that their vote isn’t getting wasted in a sense,” said Fawaz Tirmizi, sophomore in Engineering and ISG senator.

Tirmizi, who is up for reelection this year, stressed the importance of student votes. In last year’s election, Engineering saw close to only 5% voter turnout. Tirmizi said student trustees vote with the Board of Trustees, the ISG representatives and U-C Senate vote on University policy.

“There’s a lot going on there, and a lot of legitimate change happens,” Tirmizi said. “It’s really important to pay attention to the candidates and vote in your best interest.”