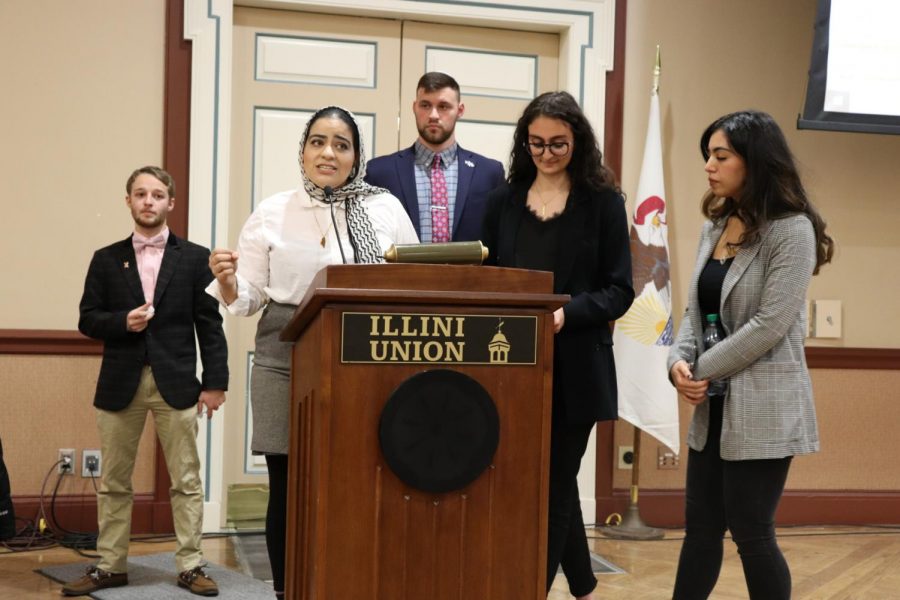 Dunia Ghanimah, senior in LAS and co-author of Illinois Student Government Resolution 03.61, presents her case for the resolution alongside authors Buthaina Hattab and Ahlam Hatib. Since its passing, the resolution sparked divided reactions and issues with voting records threaten to nullify the act.

The executive branch veto of senate-backed Illinois Student Government Resolution 03.61: “Violations of Human Rights in University Investments,” sparked divided reactions on either side of the issue. To opponents of the resolution, it was validation. To authors and supporters, it meant betrayal.

Issues with voting records on the resolution threaten to nullify the entire resolution and executive action, potentially leading to a rehearing of the five-and-a-half-hour senate meeting two weeks ago.

The non-binding resolution called for the University to divest from defense companies Elbit Systems, Northrop Grumman and Raytheon, all of which have supplied weapons or defense technology to Israel. It passed the senate floor with 20 affirmative votes, nine against and seven abstentions at 12:30 a.m. on Feb. 13, but online records after the meeting displayed 21 in the affirmative.

The petition was filed by Casey Griffin, ISG student senator and senior in FAA. Griffin was one of the student senators whose online voting record did not match the in-person decision.

For Griffin, the concern is twofold — Griffin wants student voters to know where their college’s senators stand on the issue and wants to halt action on the resolution before things go further.

“I think it’s really important we have accurate voting records and we know who’s voted for what,” Griffin said. “We ended up reaching a stage past the deliberative action by the senate into executive action, where the president was able to pass or veto this resolution before we knew how individual senators had voted. Senators were not able to check the voting records and see if they voted properly.”

The judiciary will determine if the vote on Resolution 03.61 followed “improper voting procedures” detailed in ISG’s constitution. The nullification discussion began at Wednesday’s judicial meeting.

Andrew Maikisch, associate justice and senior in LAS, is the longest serving member of the ISG judiciary, having held office since Sept. 2017. This is the first he can recall of the judiciary potentially nullifying a senate vote and executive action on a resolution.

“Should precedent not already exist, then it’s possible whatever ruling follows will be the future framework for anyone who feels the student government has followed improper voting procedures on senate resolutions,” Maikisch said.

Even if the vote isn’t nullified, the student senate could override ISG president Connor Josellis’s veto of the resolution with a two-thirds majority. Considering Resolution 03.61 passed the senate with 20 affirmative out of the 36 responding senators, the margin would be tight.

ISG President Connor Josellis and Vice President Jack Langen have come under fire for vetoing Resolution 03.61 by the bill’s authors and supporters.

UIUC Divest condemned the veto in a Facebook statement, endorsed by 26 other political, ethnic and environmental organizations on campus and elsewhere. UIUC Divest is the organization responsible for this month’s resolution.

Dunia Ghanimah, co-author of the resolution and senior in LAS, said the veto broke the solidarity she felt with October’s passing of Resolution 03.29: “Condemning Ignorance of Racism and Equating Anti-Zionism with Anti-Semitism.”

“We felt like Josellis went against his own words in the (October) Massmail when he said anti-Zionism is not anti-Semitism,” Ghanimah said. “That’s why it hurt more when (Josellis) vetoed because we thought he cared about Palestinian human rights and their voices on campus.”

Josellis said he agreed that the University should divest from companies that violate human rights and that Israel has perpetrated human rights violations against Palestinians.

“There were fears that this resolution leads to high rates of anti-Semitism, or fears (Jewish students) would have to hide their identities, and I can’t ignore that,” Josellis said. “I’m just not comfortable approving a resolution that so many students had those objections to and that they’d feel isolation if it passes.”

The resolution has caught the attention of various national and international publications, including Fox News, The Jerusalem Post, Jewish News Syndicate and The Arab American News, among others. Illinois Rep. Bob Morgan, former ISG president, released a statement condemning the resolution after it passed through the senate.

Daniel Raab, sophomore in LAS, voiced his support of the veto at Wednesday’s ISG meeting. Raab criticized the “harassment” toward ISG’s executive branch, and said its veto brought some “sense of normalcy and protection that Jewish students lack on this campus.”

Ian Katsnelson, student senator and sophomore in LAS, led the senate opposition to the bill. He said prospective Jewish students have reached out to him expressing that “they can’t go to this University” because of campus incidents of anti-Semitism.

“The walkout we had in fall semester, the anti-Semitism and swastikas here, the BDS resolution, these are all just multiple layers to the cake of why a student would feel unsafe going here,” Katsnelson said.

Many students were taken aback by University Student Affairs stating they had “no plans to act on” the resolution just minutes after the meeting.

Griffin sat in on a meeting with vice chancellor Danita Brown Young, who said the statement was prepared by multiple departments prior to the ISG meeting on Feb. 12.

“The fact is, if the actions of the student government didn’t matter, they wouldn’t have had that press release ready to go. There wouldn’t have been multiple units collaborating on it,” Griffin said.

The authors said multiple senators reached out after the meeting looking to write divestment resolutions of their own. One opposed U.S. Immigration, Customs and Enforcement, another looked to oppose China for the detention of Uyghur Muslims.

“The whole goal of the resolution was to set a precedent. We’re Palestinians, so we’re going to call out human rights abuses committed against us. The goal would be that other groups would be able to uplift other marginalized groups to release their own resolutions or statements against their own abuses,” said Ahlam Khatib, co-author of the resolution and senior in LAS.