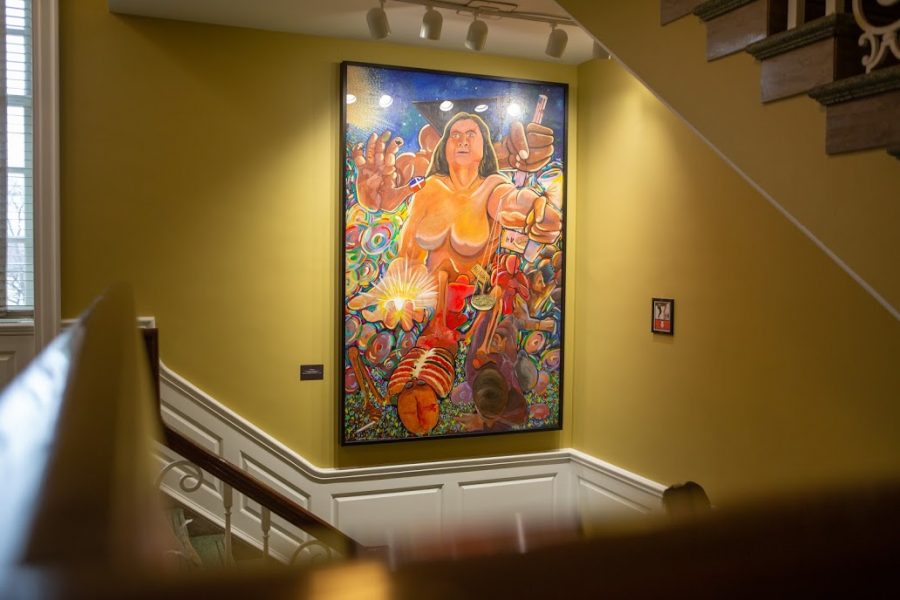 “La Victoria” by Oscar Martinez rests in the southwestern stairway of the Illini Union on Saturday. The mural’s restoration project just concluded after over three years of work.

The reason for this confusion stems from the fact that the mural was divided into a variety of smaller paintings years ago. Many of these paintings are now hanging on the walls of the Illini Union and the Spurlock Art Museum, although some of them are still in storage.

The story of the mural began in 1974 when students were protesting for the creation of what would eventually become La Casa Cultural Latina.

Eventually, the University allowed for 501 E. Chalmers St. to become La Casa. However, that wasn’t the end of the struggle; it was soon discovered that that location was set to be demolished. But Martinez had an idea to save the cultural house. He thought that if he painted a mural on the walls of La Casa, it might prevent the University from tearing it down.

Martinez said he drew most of the inspiration for “La Victoria” from his own experience. Still, he also spoke to students to get an understanding of their identities to be represented in the piece.

“Latinos and other people, minority peoples, when they go to the Art Institute, or other famous museums, they don’t see themselves there,” Martinez said. “One of the core of doing murals is to do something meaningful to the community and where people can see themselves.”

Martinez, occasionally assisted by other students, painted with watered down acrylics since he couldn’t always afford proper supplies. He left the door unlocked in case he had to run out, for fear of being arrested for defacing campus property. He worked tirelessly, at one point balancing painting the mural and taking 26 credit hours.

His hard work paid off; 45 years later, La Casa is still in operation.

“I think generations after we left felt that the mural was a very important part of their culture, their identity at the University,” Martinez said. “They made sure that La Casa was safe.”

La Casa moved to its current location at West Nevada Street in Urbana 16 years after that due to a necessity for more space, Ortega said. Still, students managed to petition to preserve the murals. Eventually, the Department of Latina/Latino Studies entered the space.

Martinez came back to the Chalmers location in 2004 on a commission by then-Chancellor Nancy Cantor to restore the walls and complete the ceiling mural.

This location was later vacated by Latina/Latino Studies in 2013, according to a report by Latina/Latino studies and La Casa Cultural Latina, and was eventually demolished. Following insistence from students and the community, rather than allowing “La Victoria” to be demolished along with the building, the University paid nearly $400,000 for a restoration project, and the mural was divided and sent to be restored at Parma Conservation in Chicago.

Martinez describes visiting Parma and witnessing the complexities of the restoration process, watching as small pieces that had fallen off would be meticulously placed into bags and glued back on. He remembers that the workers there had been confused about the nature of the piece until he told them that it was painted on wallpaper.

Martinez thinks that the restoration process demonstrates how much students, faculty and staff care about the mural, but is also pleased that the University ended up taking action to preserve the mural.

The restoration process just concluded and Martinez returned to campus last week for a celebration of the mural and Latino excellence at the University.

“I was incredibly honored,” Martinez said. “I never imagined that something like that would take place. Never, in my wildest dreams.”

However, this revitalization is not the end of the struggle. Although many of these paintings are now hanging on the walls of the Illini Union and the Spurlock Art Museum, some of them are still in storage due to lack of funds to frame all paintings, Ortega said. On a larger scale, Martinez believes that the Department of Latina/Latino Studies is in need of expansion.

In any case, the mural represents solidarity for students of campus, especially for those of Hispanic heritage. Martinez recalls asking students, during the initial painting of the mural, to contribute to it.

Editor’s note: A previous version of this article stated the University paid $40,000 for a restoration project. The University actually paid $400,000. The Daily Illini regrets this error.