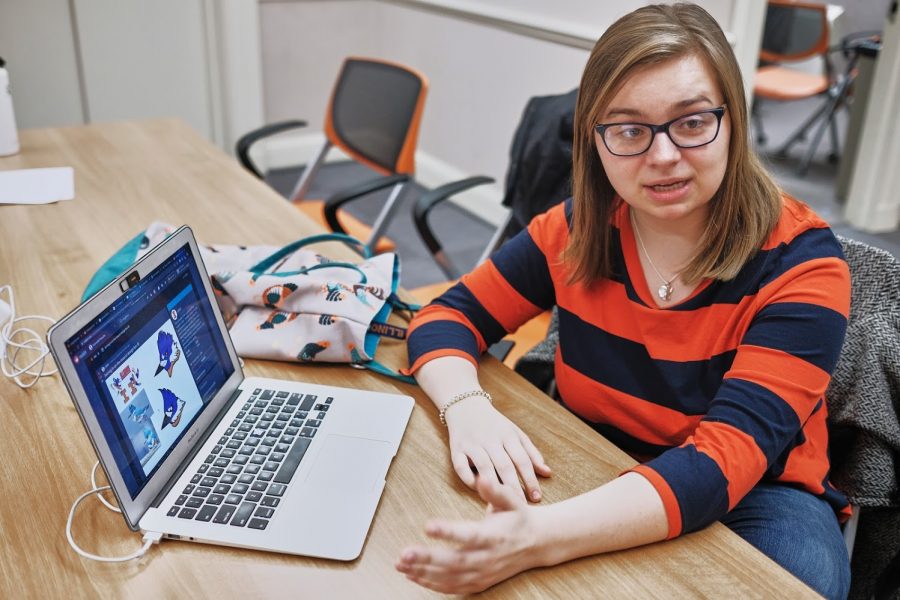 Spencer Hulsey, senior in LAS, shows a Reddit post promoting the kingfisher mascot design at the Illinois Student Government complex on Friday. Students can vote on the new mascot proposal on Wednesday and Thursday.

Spencer Hulsey, senior in LAS, is serious about her kingfisher. Starting Wednesday, students at the University can determine if her mascot idea has any air beneath its wings.

On Wednesday and Thursday, students will vote their preference on the belted kingfisher as a school mascot through the Illinois Student Government online ballot.

The referendum results are non-binding, they are just something for the student government to present to the administration if the kingfisher flies with student voters.

Hulsey’s pitch is multipronged. For starters, the belted kingfisher sports school colors. It’s “naturally true to the orange and blue,” as her official flier reads. The “naturally” is important here: the kingfisher is native to Illinois and most of the continental United States.

If adopted, the belted kingfisher would be the only female mascot in the Big Ten. Male kingfishers don’t have the fiery-feathered breast of their female counterparts.

However, there’s one big misconception floating online that Hulsey wants to clear up.

“This proposal is not a proposal to change the name ‘Fighting Illini.’ It’s just to get a mascot,” Hulsey said.

It’s the second year that ISG has put out a mascot referendum during student elections. Last year, the viral Alma Otter concept was voted down 3,510-3,807.

“A lot more people see the kingfisher as a mascot that could be fully realized in the future, not just a meme,” Zhou said.

Alma Otter’s creators whipped up their image in photoshop, posted it on Reddit and the campaign grew on its own. Hulsey couldn’t be more different — she believes in her bird.

Since first presenting the kingfisher to ISG officials last October, Hulsey has been a woman on a mission. She’s pitched her design to University Housing, the athletics department, her own physics department and a couple cultural houses.

Housing cleared her to put up kingfisher fliers in the residence halls. Her kingfisher got her a logo design gig for the physics department.

Hulsey even emailed her kingfisher design to the NCAA. They responded with their massive article detailing the history and policies surrounding Native American imagery in school mascots.

She’s cleaned up her original designs, matching the bird’s feathers to the exact traditional Illinois colors.

Hulsey is humble about her artistic flair. She’s openly vying for a more experienced artist to take her Adobe Illustrator designs and run with them.

“She always plays herself down as ‘not an artist,’” Zhou said. “All the graphics you see on our Facebook posts are created by her, 100% drawn by her. I wish there were more students like Spencer on campus.”

Elaine Schaufele is a full-time clerk at the University of Illinois Alumni Association. Though many alumni called in to criticize Alma Otter, she said no one’s brought up the kingfisher yet.

Hulsey’s personal Facebook post of the updated designs and voting link has been shared over 500 times, including to the 66,000-member “Chief Illiniwek” Facebook page, where it garnered over a thousand reactions.

“The community is mixed on the idea,” Hulsey said. “Some people are really excited to move on. Some people are like ‘Bring back the Chief.’ I don’t think they realize the Chief was banned by the NCAA.”

Lasting Chief sentiments have tempered Hulsey’s outlook. Of the 18 other schools hit by the NCAA’s crackdown on “hostile or abusive” mascots, many were quick to adopt a new one. For Illinois, it’s been 13 years.

In mid-February, two Illinois House representatives introduced a bill to ban Native American mascots unless the schools receive express permission from a nearby tribe and fulfill a host of other educational requirements.

The Peoria tribe speaks for the bygone Illinois Confederation, and they oppose Chief Illiniwek. Hulsey hopes the bill will further dissuade alumni sticking to the old mascot.

Although Hulsey is trying to build a thick skin, she can’t help browsing the comments, no matter how disparaging.

“Some people are like ‘I don’t care what people think,’ but I care greatly,” Hulsey said.

If her designs take a dive with the student body like a kingfisher on the hunt, Hulsey has one wish in the aftermath.

“Maybe they’ll finally make an official route to propose mascots,” Hulsey said. “At the end of the day, if this fails, that is what I hope will come out of it.”

Referendum results will be released by March 11. Until then, Hulsey will keep making her pitch to students and campus organizations. At heart, she’s still a kid from Kinmundy, Illinois, watching birds flock to her farm’s pond.

“If it doesn’t pass, the next idea will come along. As long as there’s no mascot, there will be people trying to get one. What it’ll be, we’ll see,” Hulsey said.