From crawl to celebration: Unofficial’s history since 1995 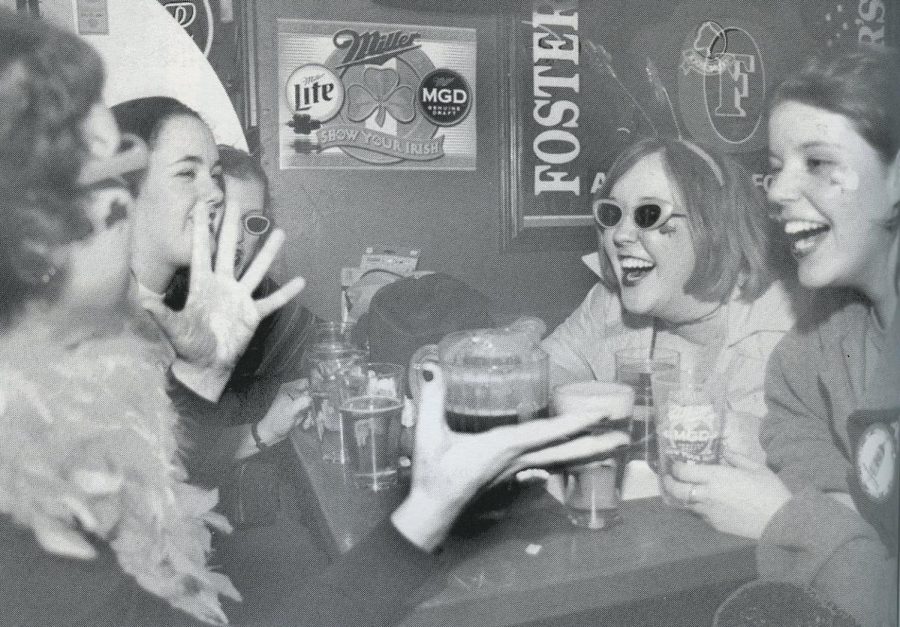 Students celebrate Unofficial at Murphy’s in 2001. Since 1995, the drinking holiday has grown out of the bars and now involves the entire campus.

Beginning in the spring of 1995, many Campustown bars found themselves facing a problem — St. Patrick’s Day fell during spring break when most students would no longer be on campus. As a traditionally heavy-drinking holiday, bar owners could see they were bound to miss out on quite a few sales. Thus, 10 campus bars began what was originally known as the Shamrock Stagger, a bar crawl that would eventually become Unofficial St. Patrick’s Day at the University.

After the first few years of the crawl-style celebration, the event grew out of the bar scene and began to involve the entire campus. What followed was Unofficial-themed parties, clothing and accessories, and it drew in people from all over the country to participate in the madness.

Over the last 25 years, the holiday of sorts has seen its ups and downs but has generally been shrinking as far as participants are concerned for the last few years due to unfortunate accidents and subsequent crackdowns from the University.

“(Unofficial) was a lot different when I started. It was about 13 years ago,” said Zachary Mikalik, Urbana police day shift supervisor. “It seemed like it was a much bigger event. Kids would come from all over to participate, and there were concerns early on because we’d had a couple of injuries and a couple of deaths due to the event.”

After the first death during Unofficial in 2006 due to a drunk driving accident, the University and local police departments began to enforce stricter policies. Directly after this incident, former Chancellor Richard Herman created the Unofficial St. Patrick’s Day Task Force, comprised of faculty, staff members, students and community leaders, in order to reduce or eliminate harm coming from Unofficial and other alcohol-related events.

Those that have been around the campus for extended periods of time agree Unofficial isn’t what it once was.

“I was a student here at the University when, I’d say, Unofficial was at its peak as far as the number of people participating. I’ve been at UIPD for about five years now, but I’ve been around the University for about 14 years, and I’ve seen it every year,” said Patrick Wade, University of Illinois Police Department communications director. “I think it was a pretty big deal back in 2006 to 2009 when I was a student here. Over the years, the level of activity has really decreased.”

While many students and alumni argue the University and police departments ruined the once-fun celebration, officials claim they’ve only made the event safer.

“We don’t want people to get hurt; that’s the goal of all of this,” Wade said. “The things that stick out to me are when people get hurt, and that’s what we try to prevent.”

For many students currently attending the University, especially undergraduates, it’s hard to really notice any difference in Unofficial since they began attending the University after many major changes to the holiday had already been put in place. One of these major changes was the Emergency Order issued by Champaign Mayor Deborah Feinen in early 2016, limiting the sale of beer and liquor in Champaign, including at many bars and liquor stores used by students.

“For me, (Unofficial) hasn’t been too different while I’ve been a student here,” said Tristan Creek, a fifth-year senior in Engineering. “Even when I was a freshman, I saw cops walking around and ticketing even for jaywalking. They were strict back then walking around, but now, it seems like (the police) and the school try to take more of a preemptive measure.”

With a multitude of restrictive policies in place during the event, many participants don’t see bars as much of an option anymore.

“The bars aren’t even really fun on Unofficial; they’re pretty empty since every bar is 21 plus,” Creek said. “It’s better to just hang out at someone’s apartment.”

To avid Unofficial-partiers, this may seem like an end-of-days situation, and it very well could be just that.

“I think Unofficial St. Patrick’s Day is kind of on its way out,” Wade said.