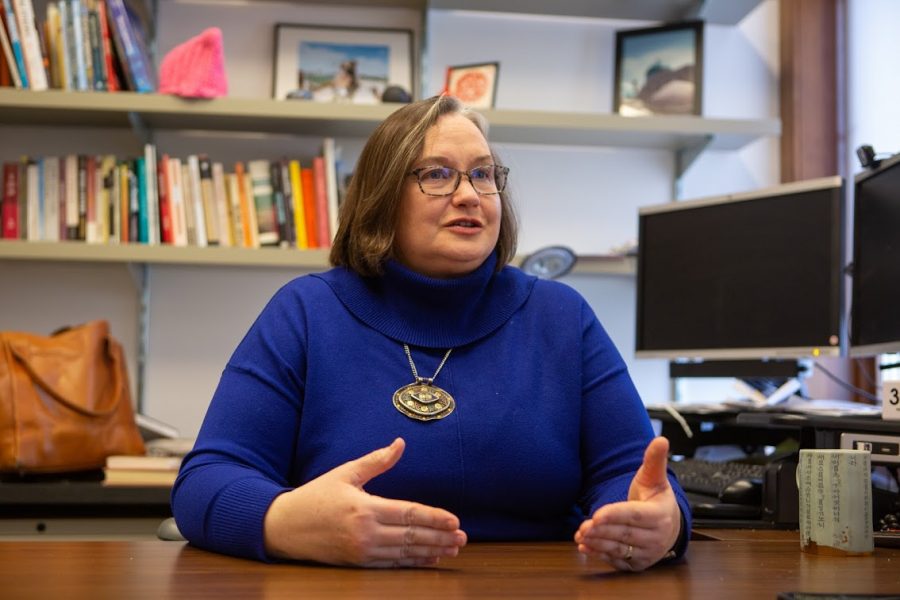 Dr. Cynthia Buckley explains her field work in Russia concerning the collapse of the Soviet Union on Friday. Buckley will present on Tatyana Zaslavskaya, a sociologist and economist she worked and studied under.

Kicking off Women’s History Month, the Women and Gender in Global Perspectives and The Illinois Program for Research in the Humanities will be hosting “12 Women Who Changed the World: Untold Stories.”

The event will take place Monday from 3:30-5 p.m. on the third floor of the Levis Faculty Center.

In previous years, speakers were selected to give a five minute speech on a woman of their choice who changed the world in or related to their field yet whose efforts may have gone overlooked. For the first time, Chancellor Robert Jones will also participate as a speaker.

Medra Roberts-Southerland, assistant director for Diversity Initiatives for the Office of Diversity, Equity and Inclusion and a speaker this year, said she has attended these events many times in the past.

“I’m always fascinated by the individuals that they have to actually speak and the individuals who they choose to speak about,” Roberts-Southerland said. “I learn so much about women, and I’m actually taking down notes.”

Cynthia Buckley, professor in LAS and research affiliate at the Center for Women and Gender in Global Perspectives, chose to present about Tatyana Zaslavskaya, a sociologist and economist who Buckley worked with and studied under. Zaslavskaya was crucial to Mikhail Gorbachev in taking down the totalitarian state in place in Russia at the time.

“Not only is she an incredibly inspiring role model in terms of being a great scholar and a great researcher and a great teacher, it is a mistake to think about the collapse of the Soviet Union and not look at the incredible role she played,” Buckley said.

For Margareth Etienne, associate dean for Graduate and International Programs and professor in Law, the choice was Shirley Chisholm, the first African American woman to serve in Congress and the first major-party African American in history to run as a presidential candidate.

“She is someone who’s been a hero of mine for a long time,” Etienne said.

The event is taking place the day after International Women’s Day. Buckley noted the significance and timeliness of this event, citing particularly the recent departure of Elizabeth Warren as a Democratic candidate for the upcoming presidential election and the reaction she has seen from many of her own female students following this.

“I sympathize with their reactions … history is written by the winners, and we all need to do a better job of understanding winners don’t always make a full list of the people who help them win,” Buckley said. “To really call out important women who haven’t been in the first chapter of the history book and maybe deserve to be … I think that that’s really important.”

Although this event is specifically a celebration of the impact of women, Etienne pointed out it will be beneficial for all attendees, regardless of their gender.

“All of us tend to be empowered by stories of other people, by examples of those who’ve tried things that we would long to try or hear about, challenges that other people have faced or overcome,” Etienne said. “In that sense, I think that having an event that really is untold stories of 12 women who changed the world is really promising for anyone in the audience to hear about.”