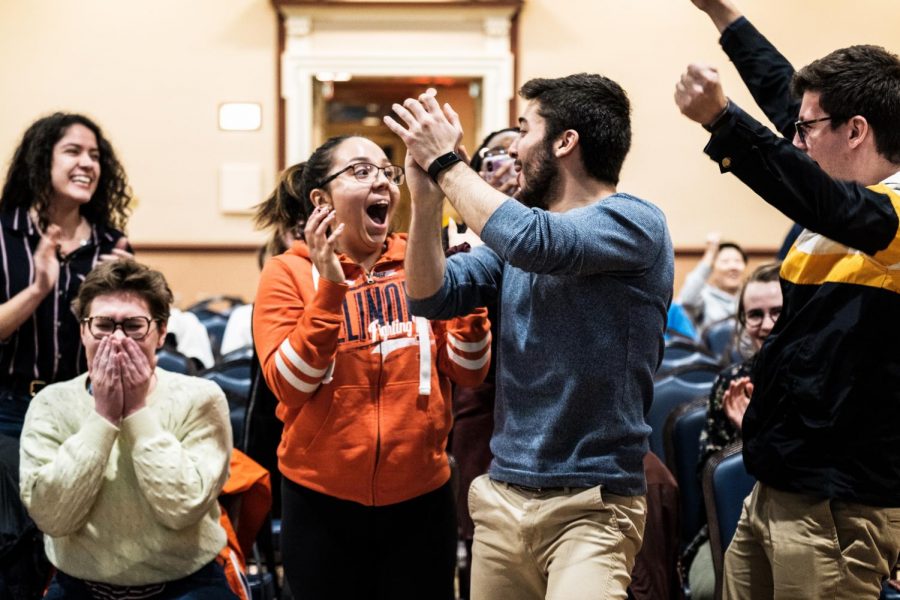 Alexis Perezchica and Chris Ackerman-Avila are the new president and vice president of Illinois Student Government.

Student election results were released at the Illini Union Rooms B and C starting at 8:30 p.m. Monday.

According to the preliminary count, their ticket won 2,905 votes after ranked-choice distribution, beating out second-place ticket Ian Katsnelson and Bridget Glass by 582 final votes.

Perezchica and Ackerman-Avila were the first choice ticket for 933 student voters, while 648 students selected Katsnelson and Glass as their number one executive choice.

All referenda in the 2020 ballot passed the student body. The Media Fee, Student Organization Resource Fee, Study Abroad & Travel Scholarship Fee and Campus Transportation Fee were all recommended for renewal by margins of 2,700 votes or more.

All Illinois Student Government ballot questions were supported by the student body.

Students overwhelmingly favored allocating more funds to the Counseling Center and Office of Inclusion & Intercultural Relations, voting 6,061 to 1,174 and 5,009 to 2,214, respectively, for the two funding questions.

Student voters also supported an initiative 6,231 to 1,103 to “allow students a choice of using their chosen names on graduation diplomas” without the legal documentation. This resolution was intended for transgender students and international students, who may not want to use their legal name on their diploma.

Students also voted 4,222 to 3,597 in favor of adopting the orange and blue belted kingfisher as a University of Illinois mascot. The non-binding resolution will be presented to University administration to indicate student support for a new school mascot.

With 7,819 votes, the kingfisher was the most voted-on item on the student ballot this year. More students supported the belted kingfisher than last year’s “Alma Otter” mascot idea, which was voted down 3,510 to 3,807.

Full election results and vote calculations are available at studentelections.illinois.edu.

Editor’s note: A previous version of this article stated Alexis Perezchica and Chris Ackerman-Avila won by nearly over 500 votes. They won by 582 votes. The Daily Illini regrets this error.