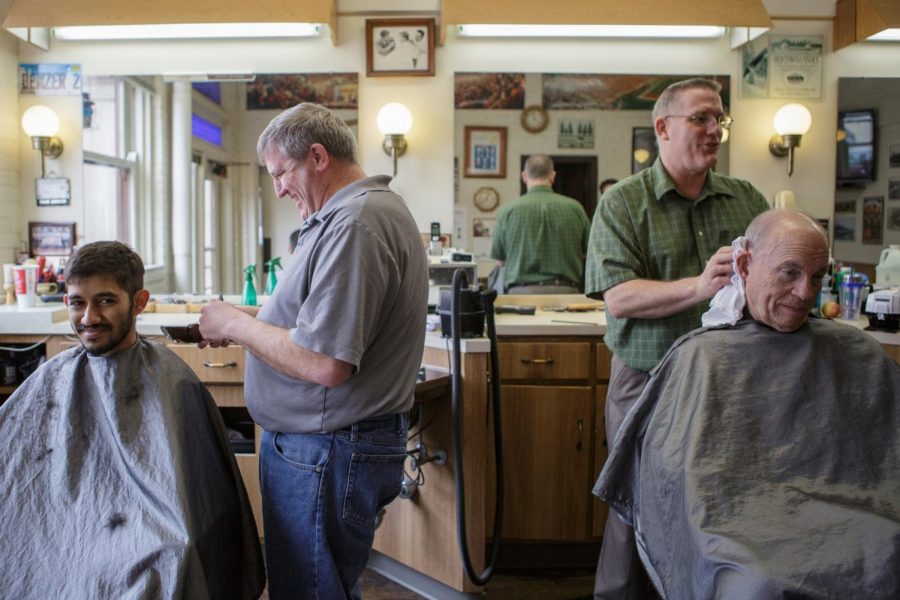 A man receives a haircut at Depot Barber Shop located at 100 N. Chestnut St. Friday. The street, located in downtown Champaign, is now part of the certified national historic district.

This past January, the U.S. Department of the Interior and the National Park Service certified much of downtown Champaign as a national historic district. This district takes up about 19 and a half acres, contains 52 contributing buildings and 11 non-contributing buildings.

Owners of properties within the district are granted a 20% income-tax credit for keeping their properties up to par with the National Parks District’s standards.

TJ Blakeman, senior planner for economic development for the City of Champaign, said a major benefit of this historic district is that property owners are not required to do anything with their properties that they don’t want.

Blakeman pointed out that if the district were to lose enough of its integrity, then the National Parks District would move to delist it, but he said doesn’t see that happening anytime soon.

“Hopefully people will use this to preserve their buildings, but there have been instances where a building has been torn down or altered significantly,” Blakeman said.

The process to certify downtown Champaign as a national historic district was actually started by an owner of many of the properties downtown, Janet Bubin. Initially, she was looking for extra funding to renovate her property at 30 E. Main St. to move one of her businesses, Kofusion, to that location.

“We knew the 30 E. Main building was built in 1895, and we were hoping to have it preserved so we started the process to make it historic,” Bubin said.

“Applying as a single entity though, the standards are a little more stringent,” Morgan said. “So we realized very quickly that that probably wasn’t going to work.”

With the help of the city and another owner of many properties downtown, William Youngerman, Bubin and Morgan hired consultants to take a look at a few of the buildings they possessed.

“It was actually a very good partnership between private enterprise and city government in terms of getting something that will be mutually beneficial done,” Morgan said.

They quickly realized while most of their individual buildings wouldn’t qualify, applying with many of the buildings as a district could work.

Blakeman said getting the district recognized took a good amount of effort, as there is a lot of research to do to determine whether there have been any major alterations to the buildings, or if they still contain their defining features. After the initial research was completed, the application for the district required more hoops to jump through so it could come to fruition.

Champaign residents, downtown property owners and workers in the area are excited for the future of the district following its certification.

“Within a block of us there’s probably three or four empty buildings sitting there,” said Gene Mochel, co-owner of Depot Barbershop, a business that rents its space from one of Youngerman’s properties included in the historic district. “This national historic district thing will mean there’s some financial incentive for them to renovate and get some of those buildings back up and going, which would be nice.”

As many businesses hope to expand in the downtown Champaign area, many hope this new certification, along with the tax credit, will encourage owners to preserve the historic sites.

“Giving property owners additional tools to help balance out economic pressures to maybe tear their buildings down is only a good thing,” Blakeman said. “This gives property owners the tools, I hope, to do that.”