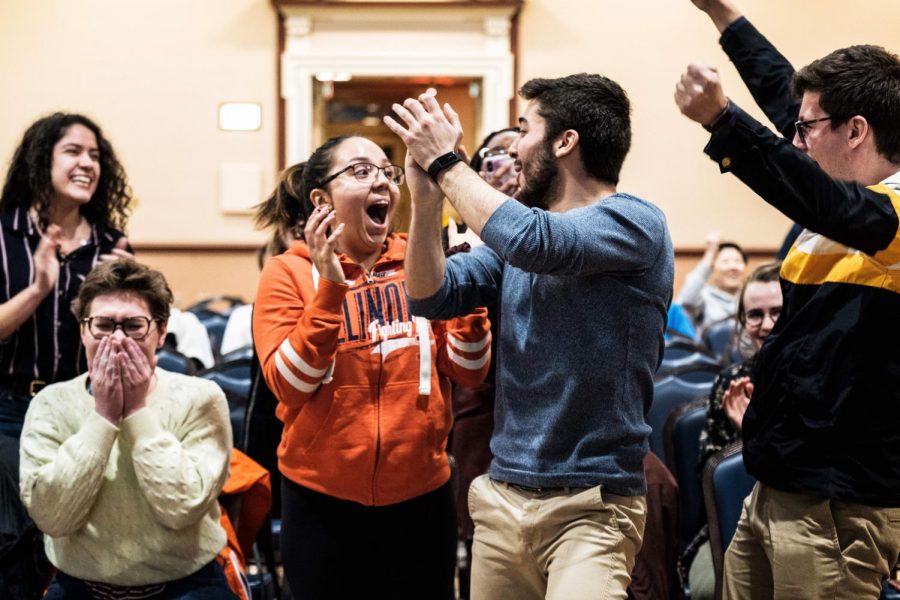 According to preliminary vote counts, Alexis Perezchica, sophomore in LAS, and Chris Ackerman-Avila, senior in FAA, are the new president and vice president of the Illinois student body for the 2020-2021 academic year.

The pair prevailed in a hotly contested four-way race for the executive positions, riddled with election complaints against them and two other tickets. A handful of complaints were written by presidential candidates against their opposing tickets.

Some Illinois Student Government officials doubt the allegations could result in a disqualification for Perezchica and Ackerman-Avila, though it may lead to vote penalties that would tighten a close race.

Several students filed complaints against Perezchica for allegedly passing out campaign flyers before some of her classes, which would violate code 7.10 in the Campus Student Election Commission’s official elections guide.

The rule prohibits campaigning in classrooms, including “pre-class or post-class announcements” in favor of certain candidates.

Other complaints were leveled toward candidate pairing Aisha Shekara, junior in LAS, and Mike Van Wagner, sophomore in AHS, for directing students to unofficial “polling locations” with the candidates’ personal computers and distributing flyers in forbidden locations like the Illini Union.

Presidential candidate Ian Katsnelson, sophomore in LAS, received complaints for emailing students asking for their election support. Complainants were unsure where Katsnelson obtained the email addresses and whether he violated information technology rules in doing so.

A common allegation toward the Aisha-Mike and Alexis-Chris tickets was “slating,” indicating support for candidates in other races  in official campaign communications.

Katsnelson filed a complaint against 24 different ISG candidates for slating, adding in evidence of “defamatory statements” from an alleged agent of opposing campaigns.

Both Aisha’s and Alexis’ campaigns endorsed candidates for the student senate on their Facebook pages and some of their flyers.

There is no specific verbiage in the election guide about slating. Complainants cited rule 7.05, which states “all campaigning must be conducted on an individual basis,” which is up to the ISG judiciary to interpret.

“We’re going to look at what slating is and if it violates the rules set out by CSEC,” said Andrew Maikisch, four-year justice of ISG’s judiciary and senior in LAS.

Previously, all election complaints were run through CSEC, but the judiciary is now handling all complaints directed toward ISG candidates.

The judiciary began determining which of the 18 complaints “have sufficient merit” at their meeting Wednesday evening, said Chief Justice Fernando Arias, senior in LAS.

Maikisch said 18 is the highest number of election complaints ISG has had to deal with during his seven-semester run as a justice.

According to governing documents, once the judiciary finds an election complaint valid, the judiciary can’t hold a hearing until three to 14 days afterward.

“Due to the high volume of cases and the time constraints in our Governing Documents, it is unlikely that these cases will be settled this week before spring break; however, we will work as quickly as possible and likely have rulings the week we return from (b)reak,” Arias said in an email.

Perezchica and Ackerman-Avila were the first choice candidates for 933 student voters, nearly 300 more than Katsnelson and Glass.

“As the first-ever two Latino students running together, we understand the struggles that a lot of the marginalized communities on campus face,” Perezchica said.

They picked up endorsements from a variety of RSOs, including activist organizations like Students for Justice in Palestine, Black Students for Revolution, Students for Environmental Concerns and Illinois — Coalition Assisting Undocumented Students’ Education. Campus entrepreneurship RSO Founders also endorsed their ticket.

“There were like a dozen or two dozen people that were part of the campaign that were helping out,” Ackerman-Avila said. “Some students signed up to do twelve hours of talking to students.”

Despite the election complaints filed against them by presidential candidates Katsnelson and Shekara, Ackerman-Avila insisted there are “no hard feelings” between them.

If candidates are unsatisfied with the judiciary’s handling of election complaints, they can file appeals to Danita B. Young, vice chancellor of Student Affairs.