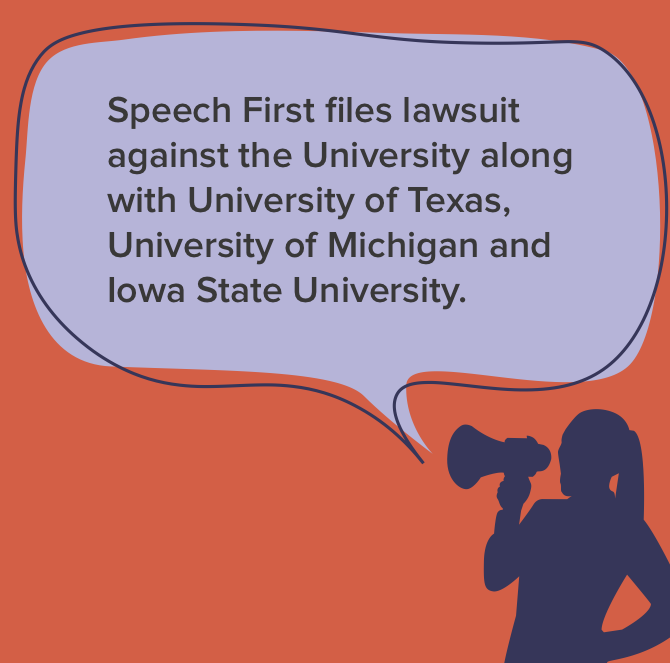 Speech First, a national organization whose mission is to fight for free speech for college students, has filed a lawsuit against the University for its Bias Assessment and Response Team. Speech First concluded this team restricts student speech by taking disciplinary action against students who get reported through the system.

Using BART, students can anonymously fill out reports online informing the University of both public and private comments that may have seemed arbitrary or offensive. In these reports, the name of the speaker is requested; the team then contacts the student on the report.

On Feb. 27, legal representatives from Speech First and the University appeared before the Seventh Circuit Court of Appeals in Chicago. Michael Connolly, attorney for plaintiff Speech First made his argument to the court with a strong focus on a previous, similar case won by Speech First against the University of Michigan.

“Like the University of Michigan, the University of Illinois has created an elaborate scheme that discourages students from engaging in expression of what others believe is bias,” Connelly said before the court.

When asked for examples of BART reports by the court, Speech First’s representative presented a series of topics: students wanting to question what they’re told about the LGBTQ community, students believing gender identity is a choice and students discussing the deradicalization of Islam. A specific example Connelly gave was of BART contacting a student after he said he believes most terrorists are Arab.

The court questioned the integrity of the presented evidence and the claim that BART “chills,” or suppresses by fear of penalization, student speech.

“There has to be a credible threat of enforcement and that’s what your evidence isn’t establishing,” a circuit judge commented after Connelly’s argument.

The University’s party held there is a lack of evidence proving the University of Michigan’s case correlates to its own. The University’s attorney highlighted that at the University of Michigan, there was evidence that an administrator might threaten a referral to disciplinary authority as a means of coercing a student to come and meet with the bias response team. In other words, a reported student had chances of getting threatened with more severe disciplinary action if he or she refused to meet with the bias response team.

However, in the University’s case, there is no proof of this being done, not even an allegation.

“We appreciate the Court considering the issues presented in our appeal,” said President of Speech First Nicole Neily in an email. Speech First refused to give further comment.