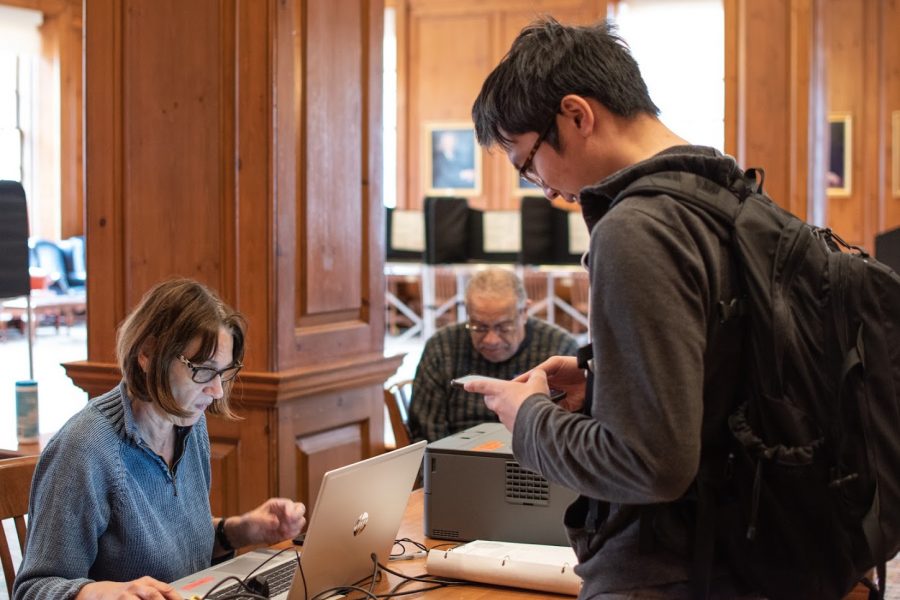 Andy Fung, a sophomore in DGS looks up the exact address for his residence hall so his ballot may be printed at the Illini Union on March 5.

The 2020 Illinois primary elections were held on Tuesday, March 17, with former Vice President Joe Biden decisively winning the state’s Democratic presidential primary. Biden took about 59% of the vote, while Sen. Bernie Sanders has around 39%. President Trump won the Republican primary with 96% of delegates to Roque De La Fuente’s 4%.

In Champaign County, Sanders carried about 48% of the vote, while Biden totaled a little over 45%. The results remained the same as the rest of the state for the Republicans, 96% to 4% in Trump’s favor.

There were many local positions up for primary elections in the county as well. Democratic candidates that won their primaries and will be running in the fall include George Danos for auditor, Chaundra Bishop for coroner, Mike Ingram for recorder of deeds, Julia Rietz for state’s attorney and Susan McGrath for circuit clerk.

Republican candidates running in the fall include Katie Blakeman for circuit clerk, Duane Northrup for coroner and Mark Shelden for recorder of deeds.

The rest of Champaign County’s election results can be found here.

Editor’s note: A previous version of this article misrepresented the primary results as final, and did not include several Republican candidates that won their primary elections. The Daily Illini regrets these errors.