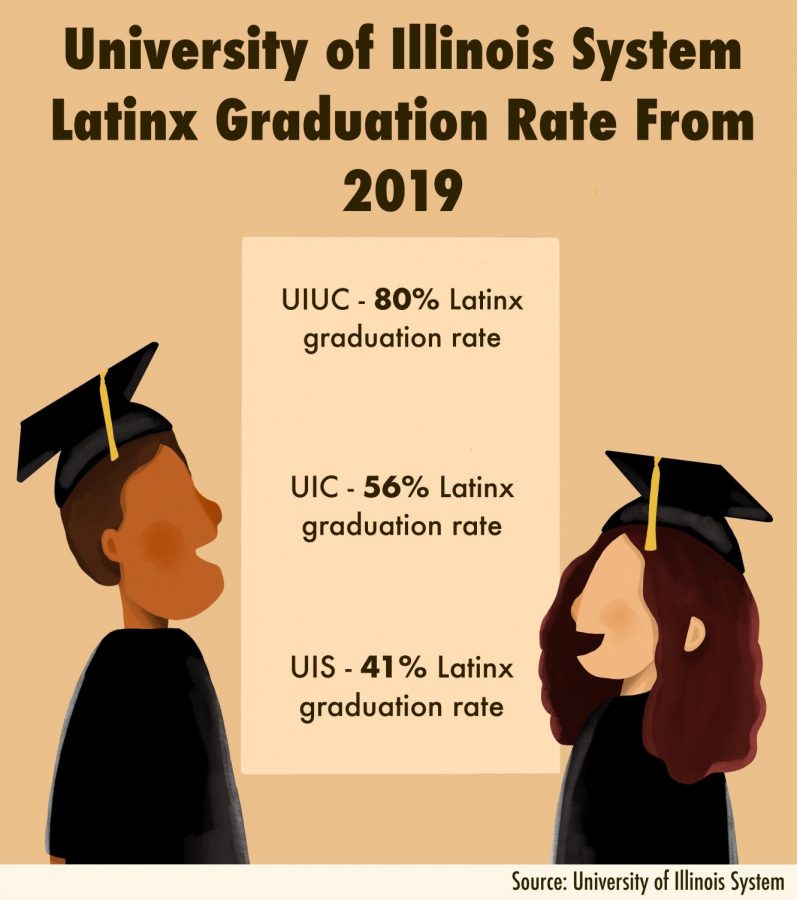 Emmanuel Castellanos, senior in Engineering, said although he is a senior, he is staying another semester due to setbacks from previous semesters.

“For me, it was a mix of academic support. I could not relate to any of my professors so I was discouraged to go to office hours,” Castellanos said. “I did have one professor though, my freshman year, who was of Latinx descent, and I’d go to his office hours. It was the first class I ever did well in.”

Kassandra Rodriguez, senior in Media, said it was hard for her to transition from her hometown to a new campus her freshman year. Rodriguez said it is important for the University to be inclusive to everyone for students to achieve and succeed in their college career.

“You kind of get thrown into the deep water of independence and that was my huge issue, feeling homesick,” Rodriguez said. “I would doubt myself as to why I am here and at the time when you are new, it is hard to find your community.”

Barbara Wilson, executive vice president and VP for University academic affairs, said Latinx graduation rates are a function of many factors, such as academic support and college readiness. Student populations in the Chicago and Springfield campuses are very different than here at the University, according to Wilson.

“Both UIC and UIS have more students who are Pell eligible (low income backgrounds) and who are first in (the) family to attend college,” Wilson said in an email. “That means that they have more economic stresses that can interfere with college completion and they may not have mentors at home who can help them when college gets stressful.”

In an effort to better the academics and lives of students with financial needs and in minority groups, the University has created programs such as Illinois Promise, a scholarship that offers additional aid to students who are of low income, as well as mentoring and tutoring programs offered by the Office of Minority Student Affairs, said Wilson.

In addition, about a year ago, the Office of the Provost launched a new student success initiative to analyze what factors predict student outcomes. The initiative consists of a group of team members from different departments of the University.

Kevin Pitts, vice provost for undergraduate education, said he hopes this launch will better the campus community, especially for students who need it the most, both financially and academically. Pitts said although the University’s graduation and success rates are good, the University can do better.

“This is really year one of this multi-year effort and year one we got four working groups that (are) re-exploring different aspects and experiences,” Pitts said.  “What we are looking very hard (at) are the challenges and bottlenecks that are preventing students from having the experience they want on campus … and so we are looking at that very closely.”

Resources offered by the University can aid a student’s success to an extent. Campus life and the environment can have great influences on a student. If an environment is not inclusive, this can hinder the academics of a student, especially those who are of a minority group, Pitts said.

According to Pitts, incidents that affect students can’t be completely changed overnight, but the University is working hard to change that.

“One is dealing with specific incidents and we got to take that seriously, but then the more broad issue is dealing with the campus culture overall,” Pitts said. “I think it’s bumpy, it’s a bumpy culture and we (have to) continue to raise awareness and try to make people understand these issues (are) affecting not only people’s lives but they tie directly to student success.”

Rodriguez said although there are cultural houses and other resources that can potentially help Latinx students to achieve graduation, there is room for improvement.

“I feel like the school doesn’t do a lot for Latinos or other minority groups,” Rodriguez said. “I mean it was nice to have the La Casa mural ceremony, but I feel like other people or students don’t recognize it like I do.”