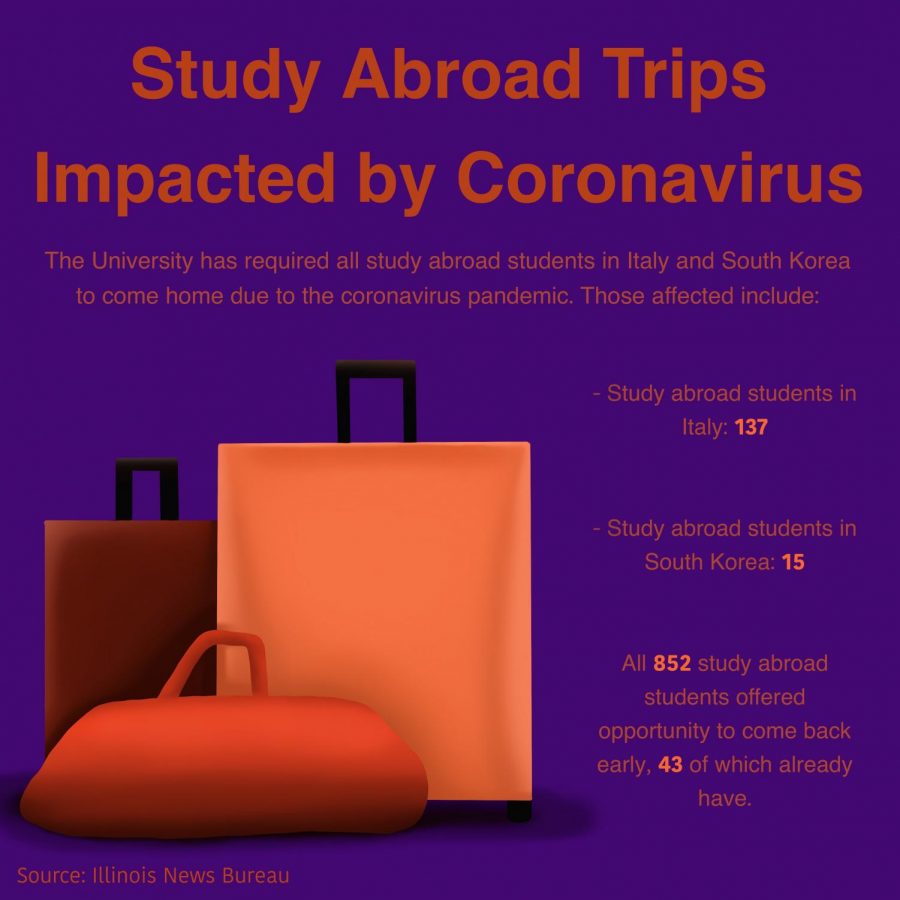 There were 852 students studying abroad this semester, with 143 in Italy and 15 in South Korea.

Students returning from a country labeled level two or three by the Centers for Disease Control and Prevention were required to self-quarantine for 14 days before returning to campus.

During the self-quarantine period, the CDC recommends measuring body temperature twice a day to monitor for a fever, practicing social distancing and avoiding public transit and crowded places.

According to Robin Kaler, chief communications officer for the University, the University is working to increase capacity for the second eight-week classes. In addition, they are exploring independent study options and working with the host programs of the students.

“It’s really going to have to be what we’re calling an ‘all-of-the-above’ approach,” Kaler said. “We’re going to do everything we can to ensure that they can get the credits that they were working on while they were abroad.”

The University expects to have the transition to online classes completed by March 23 for study abroad students.

The students studying abroad will not have to pay increased tuition.

“It’s all on a case-by-case basis to see what we need to do to make sure they don’t suffer financially or academically because of this outbreak,” Kaler said.

Even before the University canceled all international study abroad programs, all participants were offered the option to come back, an offer 43 students took.

“We wanted to make sure that any student who wanted to come home could come home because we know it’s a very anxious time for people,” Kaler said.

As far as canceling study abroad trips for future years, Kaler says it’s a little too early to tell.

“We don’t know how quickly the CDC and World Health Organization will get a handle on this outbreak,” Kaler said.

Bryant Goacher, junior in Gies, was planning a study abroad trip in Rome over spring break that was canceled by the University on March 2. Goacher was reimbursed for the program but could not get back the $60 service fee he initially paid as a result of using his credit card.

“It sucks a lot; I don’t really have any other plans for spring break,” Goacher said.

Although he is thinking about participating in the program during a future semester, Goacher remarked that this semester was the last chance for seniors.

If given the option, Goacher would still have considered going to Rome during spring break. Goacher recognized that coronavirus is more dangerous to older people but believes his good health would have protected him.

“I think coronavirus is a little played out,” Goacher said. “I feel like I would’ve been alright.”