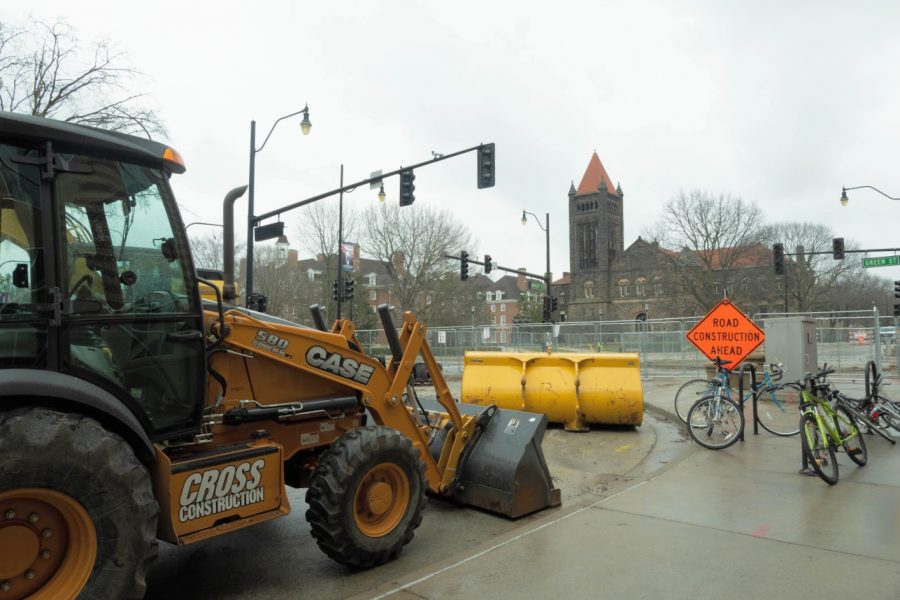 The intersection of Green St and Wright St on March 16. The construction is scheduled to be complete by Dec. 2020.

The last portion of project four in the five-part Multimodal Corridor Enhancement construction project began on March 8 and will likely last for the rest of 2020. It’s causing traffic and bus reroutes along Wright Street, though the worst of them happened during spring break.

The project, also known as MCORE, is a construction plan funded by the U.S. Department of Transportation, Champaign-Urbana Mass Transit District, University of Illinois and the cities of Urbana and Champaign. MCORE is intended to improve traffic flow and infrastructure on campus, especially on Green Street.

The most invasive construction happened during the week of March 15. At this time, the intersection of Wright and Green streets was closed off to complete work on the water main. This part of the work required the largest amount of rerouting, changing over 13 MTD bus routes.

“This traffic rerouting could (have caused) some problems for students,” said Jeremy Schultz, administrative services supervisor for the City of Champaign. “They may think they can get somewhere one way, but it could be affected by the closure.”

However, this portion of the construction only lasted from March 16 to March 20. MTD scheduled the biggest closure and rerouting during spring break to cause less inconvenience for students. This was especially effective following the cancellation of in-person instruction at the University.

“It’s good for students since most are gone on spring break, or at least not in as much of a rush getting around on transportation,” Snyder said.

As the University moved classes online after spring break, Assistant Champaign City Engineer Chris Sokolowski ensured that this would not affect the schedule of construction, and the project should be completed by the Dec. 2020 deadline.

“As of today, nothing has changed as far as the approach to the project,” Sokolowski said. “We want everyone to be safe and obey the construction traffic control and also avoid walking through active construction areas.”

Wright Street will become one-way from Green Street to Springfield Avenue. Current updates on closures and reroutes can be found on the MTD website.

“I want to thank everyone for their patience during this entire project,” said Sokolowski. “This is the home stretch, and once completed, the overall MCORE project will have transformed the heart of campus into a much more pedestrian-friendly environment.”