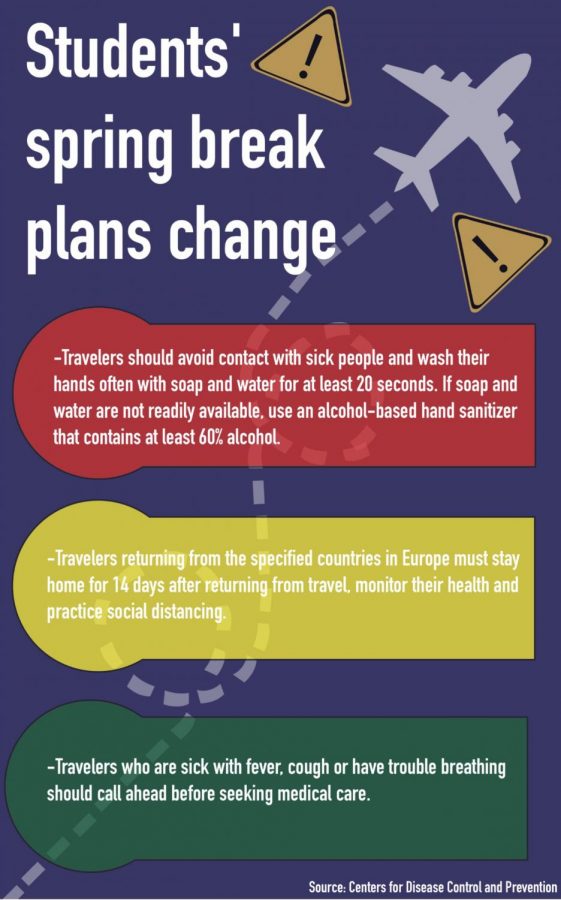 University students were forced to make a decision to drop or to continue their spring break plans as the coronavirus escalated. Many students decided to stick with their plans, while others decided it was best to stay home to avoid highly infected destinations.

Jack Casey, junior in Engineering, traveled to the San Francisco Bay Area for spring break. He and his friends looked into canceling flights, but due to the lower number and severity of cases in the Bay, they decided to still go.

“Travelers should not really cancel their plans, but they should take into account the various restrictions that airlines have put in place,” Dolea said.

She also advised that people traveling on planes should be practicing proper coughing etiquette, washing hands with soap and water frequently and keeping distance from those that are coughing.

“My plans changed five hours before I left to go to the airport,” Escamilla said.

President Trump’s 30-day travel ban from European countries played a role in Escamilla’s decision; however, she realized after deciding to stay home that U.S. citizens are still able to travel under the ban, she said.

Contrary to the World Health Organization’s video, the Department of State released a Global Health Advisory on March 15 that advises U.S. citizens to “reconsider travel abroad due to the global impact of COVID-19.”

“Many areas throughout the world are now experiencing COVID-19 outbreaks and taking action that may limit traveler mobility, including quarantines and border restrictions,” the advisory reads. “Even countries, jurisdictions or areas where cases have not been reported may restrict travel without notice.”

In a Massmail, the University informed students that those traveling to a CDC COVID-19 level two or three country will be required to self-quarantine for 14 days before returning to campus. Some countries included in these levels are China, Austria, France, Germany, Italy, Spain and Greece.