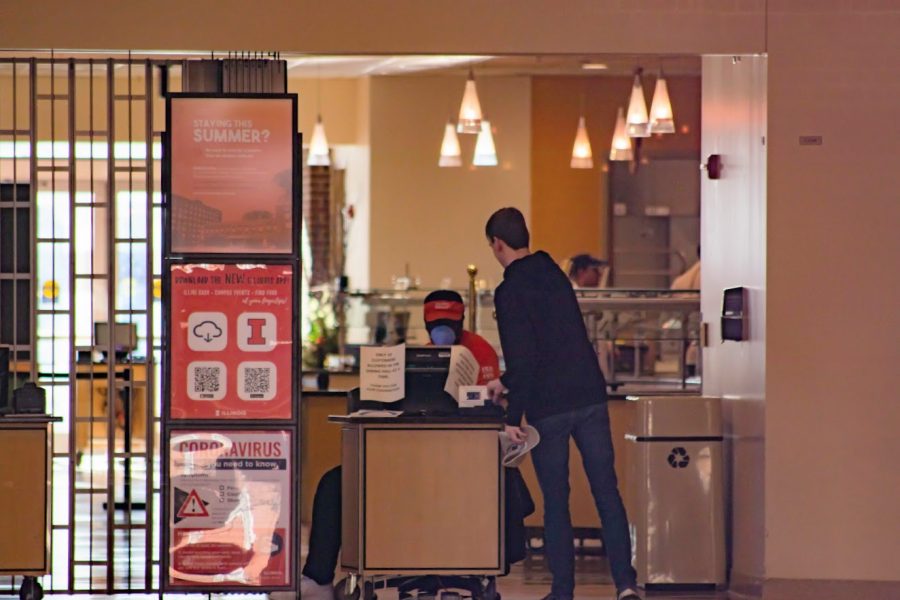 A student swipes into the Ikenberry Dining Hall as a student worker staffs the entrance on Monday.

Many University student workers feel uncertain about the future of their employment and compensation.

Following the closure of a majority of University facilities due to COVID-19, many students have been temporarily left without a job.

Despite this loss of income, student workers may still have the opportunity to receive compensation. According to a recent Massmail by Chancellor Robert Jones, University employees will continue to receive income and benefits “without interruption” during the currently instituted shelter-in-place order.

Employees deemed essential will be able to return to work on campus, and others may work remotely.

The Massmail links to a protocol which further outlines that those workers whose normal tasks cannot be completed remotely and are not essential will be compensated with the same hourly wages they had received as of March 9.

These workers are expected to be available and to continue monitoring the situation, as they will be required to “provide as much service as possible,” complete online trainings and participate in meetings. They may occasionally be given tasks that can be completed from home.

However, many student workers are still unclear about when they will be receiving this pay, if at all, despite the information provided by the University thus far.

Furthermore, there are varied degrees of communication among workers with their bosses on the matter. Although some may have already communicated with their bosses, others are still awaiting word from them, while many bosses themselves don’t have the answers yet.

Cristina McNamara, sophomore in ACES and worker at the Illini Union, is aware of the Massmail, and she believes she will receive some form of compensation, although she remarked that this situation is “up in the air.” However, for many students, the specifics are even more muddled.

Alexander Correa, sophomore in Media, works at the University of Illinois Foundation, a call center that seeks donations and contributions to the University from alumni and other parties. He is currently awaiting confirmation that the original date he had been told he’d be able to return to his position, April 9, has been postponed.

Correa expressed doubt that he would be compensated for the rest of the semester because he is unable to work from home, and he hopes to return to his job next semester.

The confusion surrounding the current state of employee salaries isn’t unique to Correa. Trinity Soto, sophomore in ACES, echoed a similar sentiment concerning her job as a desk clerk at the Florida Avenue Residence Halls.

Desk clerks are one of the few on-campus positions that are still open, as some students elected to stay on campus with Continued Housing.

However, many residence halls are being closed as occupants are moved and consolidated into other halls; according to Soto, front desks are no longer open 24 hours. Due to this, clerks who chose to remain working for the time being have diminished hours.

Regarding the payroll of desk clerks who are not currently working, Soto said she and her coworkers haven’t heard anything specific from the University, but they had been continuing to monitor and discuss the situation.

“One of my coworkers, she has another job, and she said they were continuing to pay her, but as of now, the University has not sent anything to us directly,” Soto said.

Despite various degrees of information among University workers, student workers across the board have a desire to return to work when possible.