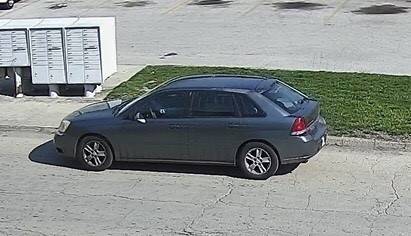 A photo of the car believed to be involved in the shooting on Saturday.

Around 9:52 a.m. on Saturday, Champaign police responded to a shots fired report on the 400 block of Edgebrook Drive. Officers found multiple shell casings at the scene that confirmed the report.

At about 9:59 a.m., the police were notified that a 20-year-old male had arrived at a local hospital by private vehicle with a non-life-threatening gunshot wound.

According to the preliminary investigation, a subject exited a dark-colored vehicle and fired multiple shots, hitting the victim. The subject returned to the vehicle and fled the scene. Police have released a photo of the vehicle and suspect who is believed to be involved in the incident.

Champaign Police ask that anyone with information about this incident contact them at 217-351-4545. Arrangements can be made to share information privately. To submit tips anonymously, call Crime Stoppers at 217-373-8477 (TIPS), submit them online at 373tips.com, or use the P3 Tips mobile app.

Crime Stoppers is completely anonymous and will pay $1,000 for information leading to the arrest of the person or people responsible for the crime.