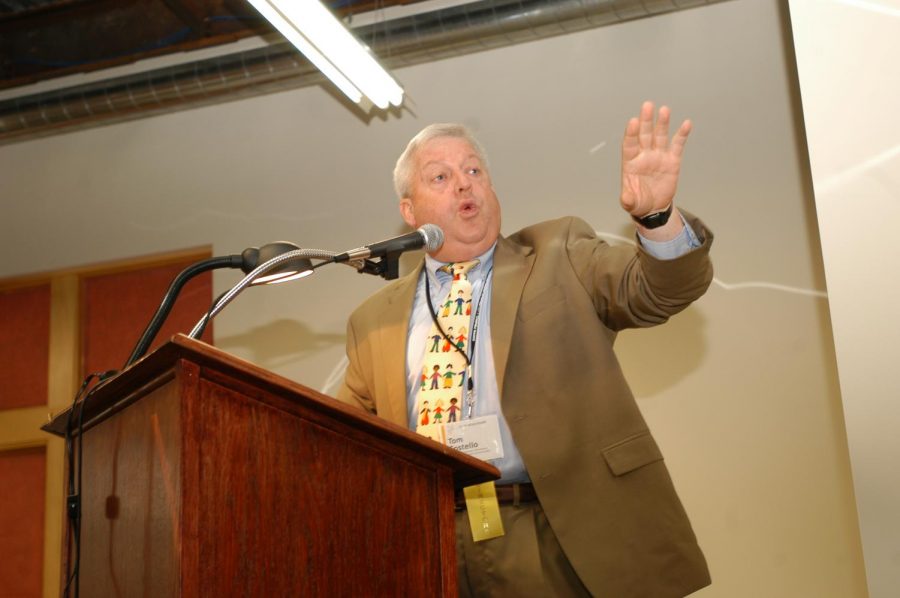 Costello joined the Communication Department in 1972 and has taught several courses in the department. In 2014, Costello announced his retirement from Champaign-Urbana Mass Transit District after working there for nearly 40 years and was instrumental in getting the C-U MTD arrangement with the campus.

Tom Kacich, a columnist at The News-Gazette, first met Costello in 1975 when Kacich was a reporter at The News-Gazette. Right off the bat, they had myriad things in common, from growing up in the same area, down to their wives’ professions as school teachers. They were close enough friends in fact, that Kacich even donated a kidney for Costello. Costello was close to needing dialysis treatments, but that became unnecessary after Kacich offered his kidney in early fall of 2016.

“I was honored to do it,” Kacich said, noting that Costello would have done the same thing if Kacich had needed the kidney. “He’s that kind of guy. He helped so many people in this town with problems. He never said no to anybody, he always went the extra mile for people. When he was a kid, his aunt said that he had a motor in his ass. I think you could say it would still work even when he was 70 years old, he had a lot of energy and was always willing to help people.”

Lil Levant, the former publisher and general manager of The Daily Illini, says Costello was one of the biggest reasons why she decided to move from Chicago to the Champaign-Urbana area.

“Tom absolutely had the biggest influence on me to come and that’s because I could immediately tell how impassioned he was about Illini Media,” Levant said. “He loved all aspects of it and he just really wanted to entrust somebody with running it. I have never ever met anyone like Tom Costello, he was completely unique in so many ways. He’s the most down to earth person I have ever met. He has friends across all walks of life, he loved people so much. Hands down, he was the most personable human being I have ever encountered. Whether they knew him well or didn’t, everyone lost a dear friend. He was always concerned about people and he always took an interest in everyone he met. What we lost is someone that nowadays is so hard to replicate. In a world that is so vicious and sad, he was always upbeat and kind, no matter what he was going through personally — and he went through a lot. He was an example to remember the goodness and the humor about people.”

“He was just a really funny guy, every time he came in he would make me laugh. He’s such a huge personality, he cares about everyone. He would do anything for anybody, and he was always an advocate for other people. Truly a good person.” Donahue said.

“He and [his wife] Rose were both fixtures in the community. Since I’ve had the opportunity to know him, Tom is one of the most vibrant and was certainly one of the most generous and caring people that I knew. He was just a lover of people. He would never avoid a conversation with somebody, he just loved getting to know people and always thought the best of them. You always felt like he had your back, even if you made a mistake on something, he cared about your character, your intent and I think that’s kind of rare,” Harlan said. “The other thing you couldn’t miss was his sense of humor. He always had a joke, a story, an experience and he always just made me smile and laugh and I’ll really miss our banter.”

Costello served as a member of the University Faculty Senate and has also been recognized by and received awards from LAS and the University for his excellence in undergraduate teaching.

In February, Costello along with his wife Rose, were named to The News-Gazette’s second Seventy Over 70 class, which honors those who have demonstrated a lively curiosity and willingness to learn something new, an aptitude for personal and/or professional growth and a commitment to bettering others.

He also was the past chair of the East Central Illinois Community Foundation and served on the Developmental Services Foundation Board.

Costello was also elected president of the Rotary Club of Champaign in 1998. The club will hold a virtual memorial service for Costello on Monday in lieu of their meeting.