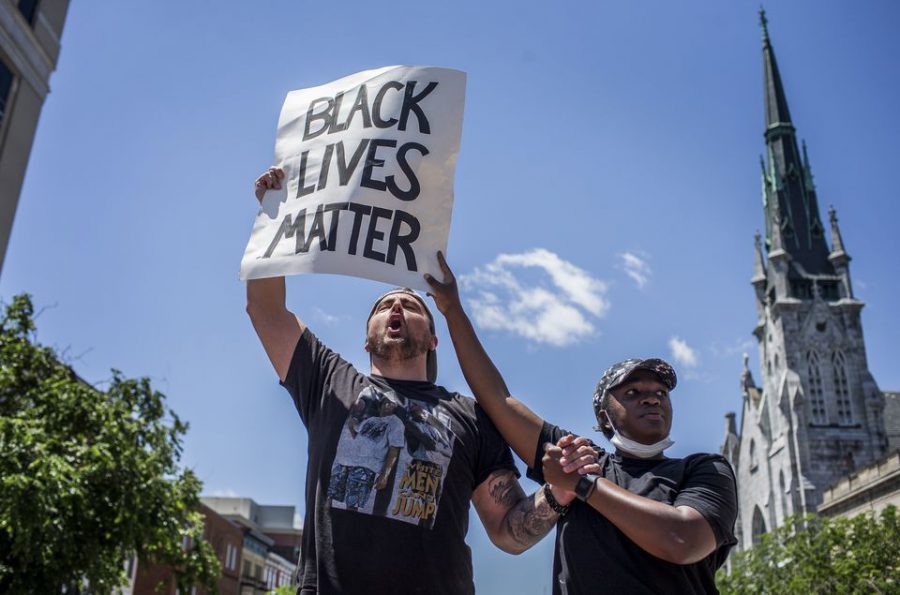 Two protesters hold a sign above their heads during a Black Lives Matter Demonstration in Harrisburg, PA on Saturday.

On Friday, members of the Champaign-Urbana community gathered together to protest racial injustice and police brutality in the name of George Floyd.

A white police officer was charged with third-degree murder after killing George Floyd while attempting to take him into custody. The officer, Derek Chauvin, was seen in videos pressing his knee down into Floyd’s neck until Floyd became unconscious.

“No justice, no peace” was among one of the many chants heard by protesters who took to the streets of Champaign to participate in the demonstration.

Friday evening, one protest in front of the Champaign Police Department resulted in a traffic block when protesters blocked an intersection. The protesters unblocked the streets after police came out of the station.

The marches continued into the weekend, with protesters meeting Saturday afternoon in downtown Urbana.

Protests are happening in nearby cities as well, with nearby organizers in Rantoul holding a Black Lives Matter protest on Sunday at noon.

On Monday, a peaceful protest will be held at the Champaign County Courthouse. The event titled “Black Lives Matter: March For Peace, March For Justice,” will take place from 3 p.m. to 6 p.m. The Facebook event page for the march already gathered over 500 responses from users interested in the movement.

In the private Facebook group “Spotted in Chambana,” members of the community are sharing videos and pictures of their different methods of protesting.

One user put up signs on a fence at Bloomington Road in Champaign, with “Honk for Justice” and “How many more lives?” among the written phrases.