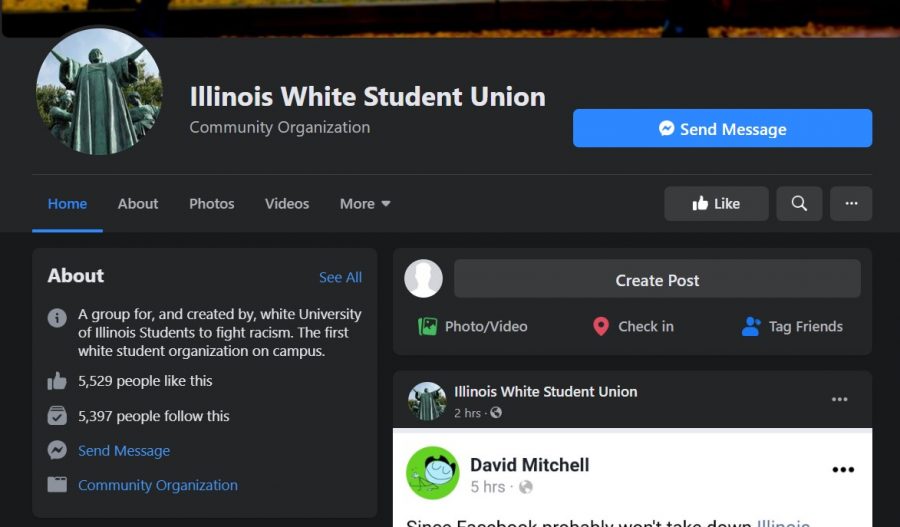 The landing page for the ” Illinois White Student Union” Facebook group features photos of Alma Mater and the quad. The page is not affiliated with the University of Illinois.

A Facebook page titled “Illinois White Student Union” has resurfaced in light of current events. The page was created in 2015 and states that it is “A group for, and created by, white University of Illinois Students to fight racism. The first white student organization on campus.”

They falsely claim to be associated with the University. Student government is working towards taking this page down; the University administration has also tried in the past to get this page deleted.

“We are trying to take it down because of the racist content that they post and because they are claiming to be associated with UIUC, and we do not stand for that as a University,” Student Senator for the College of Media and Chair of Public Relations Committee Vada Gregory said. “We have been spreading word to get people to report the page and are working on getting in contact with administration.”

The page uses the hashtag “All Lives Matter” and posts memes and pictures that scrutinize recent protests and social media movements. On June 2, the page posted a picture of Black Lives Matter activists with the caption “Racists pretending they are above it.”

The page has gathered over five thousand likes on Facebook. In the comment section of these posts, both support and opposition can be found.

The Office of Inclusion and Intercultural Relations released a statement, adding to its previous 2015 statement regarding the page.

“We have reported this page multiple times in the past and it continues to periodically resurface in slightly different forms,” it reads. “We’ve reported it again to Facebook.”

Only Facebook has the ability to take the page down and it is often difficult to get them to take down a page, according to Gregory.

“I do think this is something the administration should really focus on, considering that the page has kept resurfacing over the past five years, and because that does not represent our university’s values whatsoever,” Gregory said.

Students can report this page and their posts if they choose to.