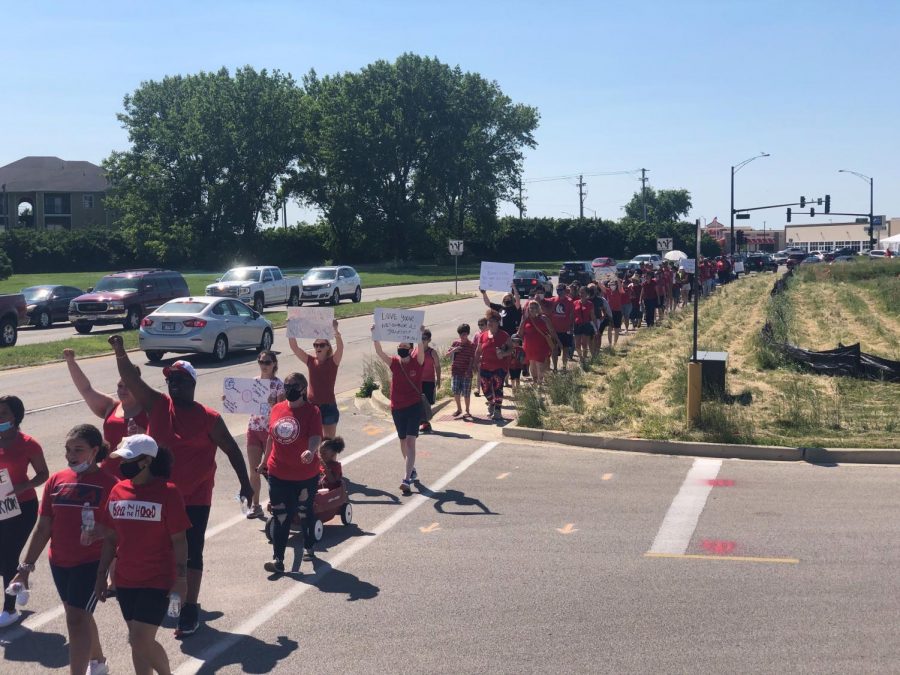 A group of protesters marches down Neil street in Champaign, IL during the Deliverance Revival Protest on Sunday.

On Sunday afternoon, a demonstration was held in north Champaign called the Deliverance Revival Protest. While this is another protest that comes in the wake of George Floyd’s death, it had a different theme than the C-U community has previously seen.

This protest focused much more on religion and the faith of its participants. Protesters were encouraged to “wear a red shirt for the blood of Jesus Christ.”

The organizers of the day’s demonstration were Kaneshia King and Alyssa Senseney. The Sunday prior to this protest, as the local Target was being looted, King stepped in front of the business with a bible in hand. She began quoting scripture and yelled to looters that this was not the right way to protest.

This Sunday, the march began around 3 p.m. at the entrance to Target, right where King had stood previously.

After some words from both organizers urging peaceful protests, King delivered an emotion-packed prayer for all of the demonstrators, then they began their march.

The protesters started on West Town Center Boulevard and moved east to North Neil Street. From there they went south before taking a break under the shade of a tree. Under the tree, King and Senseney both delivered more words of hope and prayer.

Following the rest under the tree, the group marched west on Anthony Drive until they got to Moreland Boulevard, where they went north. When the demonstrators reached Marketview Drive, they walked west until hitting Prospect Avenue, before returning to the Target entrance.

Along the way, protesters chanted more religious-oriented takes on many popular slogans, such as “no Jesus, no peace” and “What’s his name? Jesus!”

As the march first began, demonstrators walked in the street as well as the sidewalks on Town Center Boulevard, and only in the street on Anthony Drive, as there were no sidewalks. Aside from these two roads, however, protesters stuck only to sidewalks and parking lots. At all times, the marchers were flanked by a row of cars in support.

The protest lasted about an hour and a half in total.