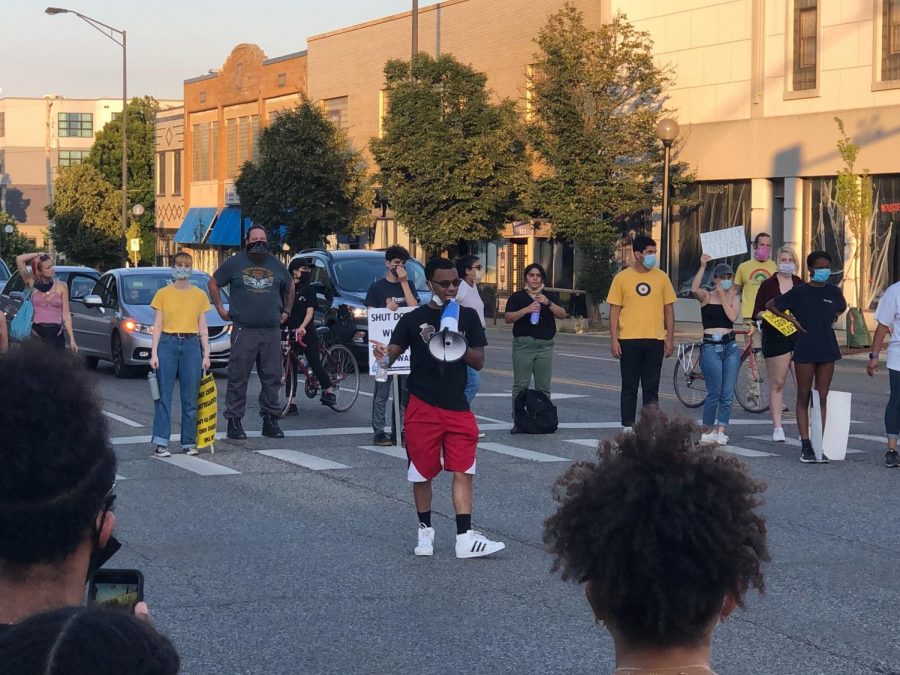 Drake Materre speaks to demonstrators on Tuesday during a protest sparked by the reinstatement of the Urbana Police Chief Bryant Seraphin.

Around 5:30 p.m. on Tuesday, protesters gathered in front of the Urbana Police Station before beginning a march through Champaign-Urbana about 45 minutes later.

The main group that led this protest is an emerging organization, Champaign County Anti-Racist Coalition, or CCARC. The organizer of this event and a speaker at many others, Drake Materre, is one of the founding members of this group.

The initial purpose of the day’s demonstration was to protest the reinstatement of Urbana Police Chief Bryant Seraphin, after an investigation into his department’s arrest of Aleyah Lewis.

Materre said that the community’s voices were not heard when they showed up to the vote of reinstatement by the Urbana City Council, which voted in favor of Seraphin’s reinstatement 6-1.

The march took the protesters from the Urbana Police Station on Vine Street to University Avenue. Demonstrators then marched all the way down University Avenue until they reached South Walnut Street in Downtown Champaign, stopping in large intersections and in front of the Champaign police station along the way.

Materre and other speakers used these stops to give speeches, with topics extending beyond Seraphin’s reinstatement. At the intersection of Fifth Street and University Ave., Materre spoke of the environmental racism that the Fifth and Hill community members face. At the last stop, Materre gave CCARC’s demands for the Champaign community. The main demand was defunding the police department. This included calls to remove police from public high schools and education, as well as stopping the expansion of jails.

After speaking at South Walnut Street, the protesters moved along University Ave. back to the Urbana Police Station where the demonstration ended a little after 8:30 p.m.

“This is the start of a new age of Champaign,” said Materre, before marching the group back to Urbana.