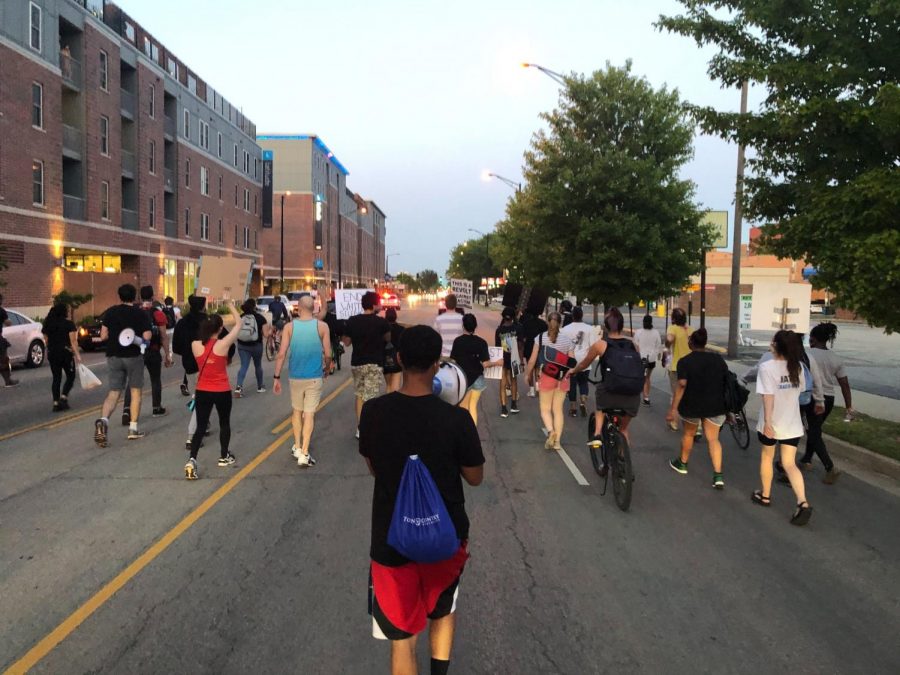 Demonstrators march down Unviersity Avenue in Champaign, IL on June 16 during a protest sparked by the reinstatement of the Urbana Police Chief Bryant Seraphin.

Demonstrators marched through Urbana-Champaign on June 16 to protest the reinstatement of Urbana Police Chief Bryant Seraphin, calling for police reform.

Seraphin was involved in the Aleyah Lewis case, which protesters believe was handled incorrectly due to excessive force and unjust charges.

The Urbana City Council voted to reinstate Seraphin June 10 with a 5-1 vote, with one abstention.

According to Drake Materre, co-organizer of the march, at an online City Council meeting June 8, many people called in to say they didn’t want Seraphin reinstated.

“I think this protest is not only just about Seraphin, but how the powers that be don’t even listen to their constituents. They don’t listen to the community,” Materre said.

Alderman Jared Miller was the only one who voted against Seraphin’s reinstatement.

Miller said that Seraphin “has not been publicly voicing how he feels about what’s going on and that, to me, was too much of a lapse in leadership, considering the times to gain my support during that vote.”

The march was led by the Champaign County Anti-Racist Coalition, a newly founded organization. They voiced demands such as defunding the police, stopping the expansion of jails, ending Immigration and Customs Enforcement raids and implementing bias training for all public officials and workers.

Other demands included healthcare and housing for all.

“It’s all a part of the national movement for liberation,” Materre said.

Miller says he is in support of those protesting and understands why.

“There has been largely, by any measure, mostly silence from the City of Urbana on most of these issues. And our police chief being the public face of our police department – he’s also one of the silent voices,” Miller said. “It says a lot to not say anything at these times.”

The Urbana City Council will be holding a meeting open to the public on Thursday, June 25 at 7 p.m..

The meeting was called by City Council members Miller, Maryalice Wu and Dennis Roberts. Miller hopes that major city players such as Mayor Diane Marlin, Seraphin, and city administrator Carol Mitten will be there.

“I think there’s definitely a will within the council and within the city to enact some kinds of changes,” Miller said.

Miller sees the meeting as an opportunity to have a dialogue with Urbana residents and take their ideas into consideration to form a plan of action.

“This is going to be a long journey forward,” Miller said, noting that change is a “multi-faceted, multi-level” process which will take efforts of multiple levels of government.