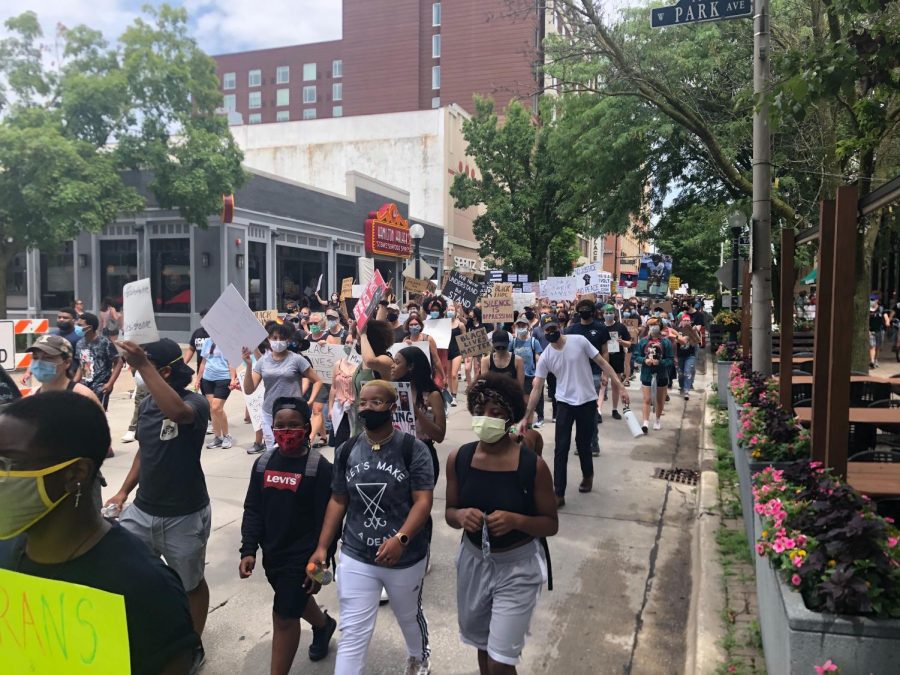 Demonstrators march south on Neil Street during a protest in Champaign, IL on Sunday.

Around 11 a.m. on Sunday, demonstrators gathered in West Side Park for another march through Champaign streets to protest police brutality and call for other changes in the community. This protest was organized by Champaign All Black Lives Matter (ABLM).

After the rain subsided and the weather cleared, the protest began a few minutes before noon, with protesters heading east on West Church Street, directly into downtown Champaign.

The first stop of the march occurred at the intersection of West Church and East Main streets, where protesters stopped to listen to speakers discuss the Fifth and Hill community, which faces forms of environmental racism due to hazardous waste.

From there, the group moved down to East University Avenue, which they walked along until getting to the Champaign police station. Then they went south on South First Street until they got to East Springfield Avenue, where they turned and headed west until Prospect Avenue. There, they turned north and finished the demonstration in the intersection of Prospect and West University avenues, just outside of Trevett-Finch Park.

Along the way, the marchers stopped at every intersection they changed directions at to allow speakers time to talk, with additional stops in other major intersections on the way. Topics of discussion included instances of racial discrimination at campus bars, the challenges that many Black students face in schools and sexual violence disproportionately affecting the Black community.

Throughout many of the protests in Champaign-Urbana these last few weeks, there have been elements of support for the LGBTQ community included. This week’s demonstration saw multiple speakers showing very vocal support, and even personal anecdotes, focusing on Black members of the community specifically.

As the protest finished, Drake Materre, one of the leaders and organizers of Champaign County Anti-Racist Coalition, once again delivered his organization’s list of demands, the first being to defund the police.