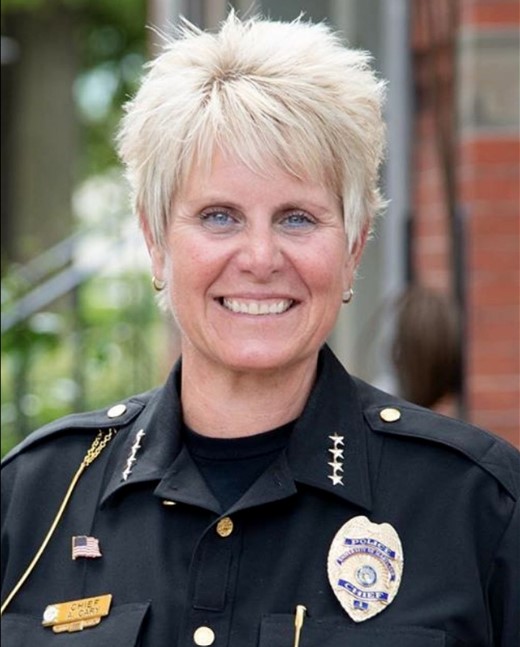 Alice Cary. the newly appointed Illinois Chief of Police, poses for a portrait.

Before UMB, Cary was the operations commander at the University of Oregon. She also served as a criminal investigator with the Lane County District Attorney’s Office for four years. Overall, Cary has 34 years of experience in law enforcement.

Cary described her main goals as police chief as investing “in our officers to make sure they have the proper training and most updated training and the equipment they need to effectively do their jobs.” Additionally, community engagement stands as a main priority, she said.

Drake Materre, Class of 2020 alumni in AHS, voiced his concerns when it came to raising the voices of black students amidst the Black Lives Matter movement. Materre is an active protester on campus and often speaks at protests.

Materre believes change comes from listening to community members and Black students during this time. He said the hiring of Cary brought upon discussion within the community of student activists, as Baltimore is a city that has experienced controversies with its police officers in the past. Based on a Washington Post article, “Court records, sentencing memorandums and Baltimore Sun archives show that at least 20 Baltimore police officers — including some who are no longer with the department — were either charged, sentenced, or suspended during 2019.”

“The only positive thing that would ever come out of this is if we were in charge, or were at the table, or we were part of the committees,” Materre said.

Cary said that the first step to positive change is assessing where the department is at and listening to the community.

“As chief, I need to meet my community members and advocates and student groups, so we have a personal relationship,” Cary said. “So I can be the active listener, and that’s what I want to do with coming in, is listen.”

Cary also said she believes that police chiefs on a national level need to listen to their communities when it comes to reform.

“We have to follow up after we’re done listening,” Cary said.