Students speak out, share experiences of social injustice on campus 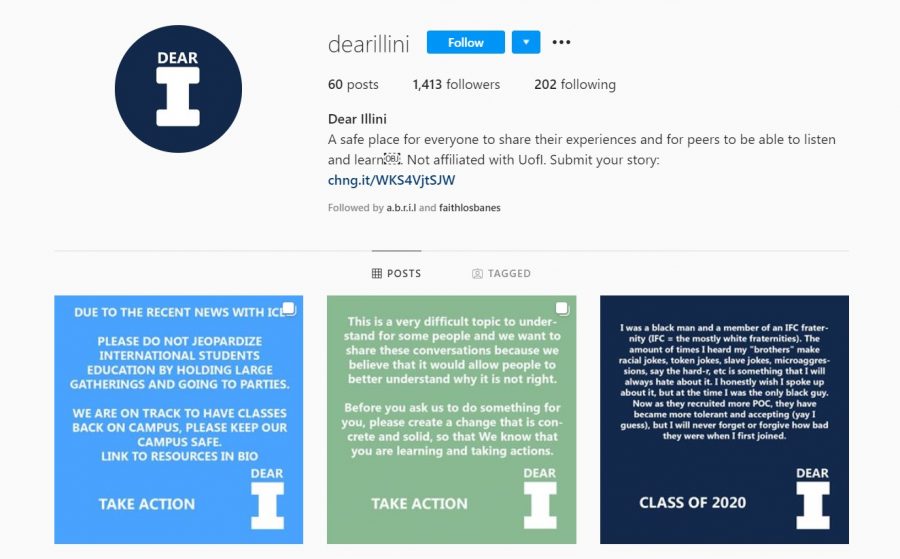 In the past month, students have taken to social media to amplify their voices in the midst of the Black Lives Matter movement which is now believed to be the largest movement in U.S. history.

Petitions for systematic change on and around campus are circulating throughout the online student community. In addition, students are using social media, podcasts and other online mediums as a tool in order to educate their peers on discrimination faced by Black, Indigenous and/or People of Color at the University and Campustown.

Some students created social media accounts independent of the University, such as @dearillini on Instagram. Dear Illini, which gained popularity in late June, is an anonymous safe space on Instagram dedicated to sharing the testimonies of students who have experienced discrimination first-hand.

The owner of the account who remains anonymous said they wanted to start the page to let students have a voice in opening up about their experiences with racism, sexism and other injustices on campus. In addition, the platform serves to educate students willing to learn about the experiences with discrimination faced by their peers on campus ground.

“I hope they can learn and hear about the stories that are happening to people around campus and feel empowered to stand up against racist behavior and behavior of sexual-harassment,” Anonymous said. “It is very difficult to say what systemic change needs to happen because you cannot force inclusivity and diversity into organizations however you can change people’s mindset by exposing them to stories like these.”

One of the common themes on the account is lack of inclusivity in fraternities and sororities. Many of the testimonies consist of BIPOC experiencing first-hand discrimination in predominantly white greek organizations.

Anonymous said the discrimination faced by students at local bars or in Greek life is a very small part of the injustice and is only magnified as such organizations are notorious for being discriminating.

“As for sororities and fraternities there are systemic changes that can happen such as illuminating the legacy policy,” Anonymous said.

Anonymous added that some specific organizations that were called out by name on the page responded in an attempt to make changes or resolve some of the issues revealed in the testimonies.

“We want people to recognize that even though we have the opportunity to be on such a beautiful campus there are so many hidden flaws that are overlooked because of the facade created,” Anonymous said.

In addition to the various new accounts gaining popularity on social media, the interest in podcasts is also growing in the student community.

Alison Green, sophomore in LAS and creator of podcast “Blk is the Blueprnt”, said while social media is a great outlet, she feels podcasts are more personal and conversation-like.

“I hope people gain a deeper appreciation for the Black experience. There are way too many media outlets that depict Black people in a negative, and awful way. I want to change that, while sharing my voice and others’ voices. I think that’s important all the time, but especially now,” Green said.

Green said she hopes the podcast will help people understand that Black Lives Matter is not solely about the police, and in every industry, there are traces of white supremacy.

“But my goal is this–know your history, because history repeats itself. I want people to know history, so we can fix it. Once you know better, you can do better,” Green said.

Green added that while she has seen the discussion around Black Lives Matter being shifted everywhere, she believes the University deserves to pay more homage and attention to its Black students.

“So many Black people at UIUC are entrepreneurs, activists and creatives along with being full time students. If that isn’t excellence, I don’t know what is. We deserve more,” Green said.

Green added that with anything, there is always room for more improvement and the University needs representatives in higher places to advocate and speak up for the Black community.

“Blk is the Blueprnt” was inspired by another recently created podcast, “You’re Wrong, Sir”, which provides an in-depth analysis into culture, sports, business and politics.

Aniyah Jones, sophomore in GIES, began working on “You’re Wrong, Sir”  in mid-May in order to apply her marketing skills to create a platform for women in the sports industry, and to amplify Black voices.

On her podcast episodes, Jones has featured guests such as Ashton Washington, the first African American female staff member in the history of the Illini Football program.

Jones said while she does not discriminate and will include guests from all ethnicities and races on her podcast, she believes it is important to give the platform she can provide to the Black community right now. Since Jones’ podcast is sports-oriented, she will be featuring the voices of Black athletes, agents, players and more.

Jones said she has not seen a huge change in the discussion surrounding the Black Lives Matter movement at the University. While she does not know exactly what she wants to be different on campus, Jones believes that the University should provide more opportunities for POC overall.

She added that actions speak louder than words, and she hopes to see progress on campus when students return instead of relying on mass emails sent out by the President about how the University is concerned about the Black community.

“In a time like this, I think it’s hard to find sincerity in others’ words, just because if you don’t speak on it; you’re racist, or you’re not with us,” Jones said. “Everybody feels the urge to talk about it and speak on it. I think it’s great that they are, don’t get me wrong. However, will it continue? It’s all about consistency and persistency.”