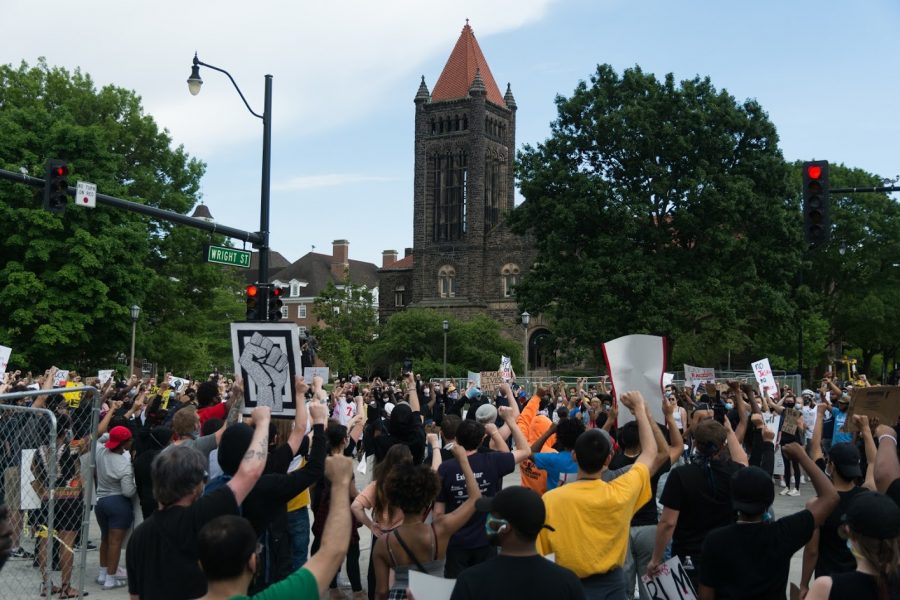 Protestors gather at the intersection of Green and Wright.

Following the death of George Floyd in late May, protests and civil unrest rose up around the nation, and the Champaign-Urbana area was no exception. While C-U didn’t see an intensity that matched major cities like Chicago, hundreds of protesters filled the streets, blocked intersections and faced down police stations during the summer.

Beginning the last weekend of May this year, small protests began to pop up in Champaign and Urbana. On Sunday, May 31, the city’s first and only instance of large-scale looting occurred, taking place mostly in northern Champaign along North Prospect Avenue. Windows and doors to Marketplace Mall, Target, gas stations and liquor stores were smashed along with other businesses. Some of this extended to campus, where several individuals shattered business windows.

That Sunday saw small protests as well, with one taking place alongside looters on North Prospect Avenue, as well as demonstrators marching down Green Street that night.

The following day saw the summer’s biggest protest in the area, with close to 1,000 people marching from the Urbana Police Station through campus and downtown Champaign to the Champaign Police Station. The initial protest, organized by Champaign-Urbana Black Lives Matter, initially was only meant to take place in Urbana. After this protest ended, student activists gathered demonstrators and continued the march.

Throughout the month of June, protests continued every weekend and some weekdays, but the frequency slowed down heavily in the month of July. Drake Materre, recent graduate of the University and co-creator of the Champaign County Anti-Racist Coalition, organized and spoke at many of the demonstrations. Another influential group this summer that organized demonstrations was Paign to Peace, created by local high school students.

Some of the protests had elements directed at the University and campus community. One protest specifically was held on Green Street, with demonstrators marching back and forth between two campus bars, The Red Lion and KAM’s. This was meant to bring attention to alleged racist practices by both the owner of the bars, Scott Cochrane, and various bar staff.

While the demonstrations slowed down in July and early August, organizers have promised protests would pick up again as classes started at the University.

“This is the start of a new age of Champaign,” Materre said during a march in June.