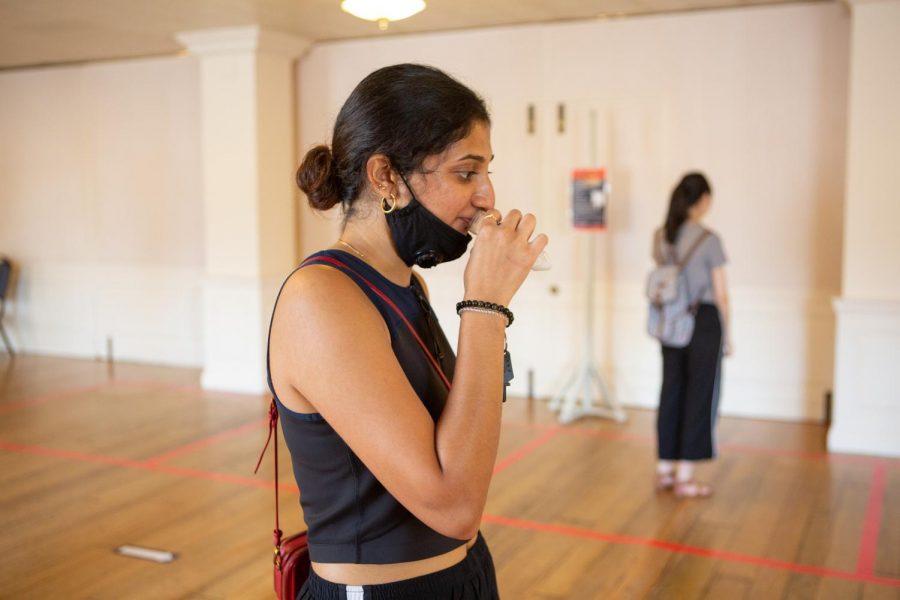 Aisha Shekara spits into a tube to be tested for COVID-19 at the Illini Union on Sunday. University students, faculty and staff must take the test at a minimum of twice a week.

The saliva-based COVID-19 test that University students, staff and faculty will be taking at least twice a week was authorized for emergency use by the Federal Drug Administration on Thursday.

The FDA granted the authorization because the direct saliva testing performs “at least as well as the recently approved saliva-testing protocol” headed by Yale University. Initial studies show the University’s test may be “eight times more sensitive” than the Yale counterpart, said Dr. Martin Burke, one of the developers of the Illinois saliva test, at press briefing Friday.

The authorization was announced Thursday at Illinois Gov. J.B. Pritzker’s coronavirus briefing. It opens the door for other diagnostic laboratories to use the University’s test and scale it across the nation.

“Today’s news puts the University of Illinois and the entire state of Illinois on the cutting edge of testing innovation on a national level,” Pritzker said at Thursday’s briefing. “And let me just say to President Killeen, the State of Illinois looks forward to being your biggest customer.”

More than 70,000 saliva tests have already been carried out on the Champaign-Urbana campus. Pritzker said there are plans to spread this “game-changing” test to other Universities across the state, and to potentially introduce the test to K-12 schools in the state, along with residents of long-term care facilities.

“As you heard from the governor, the pioneering saliva-based testing developed by our leading-edge researchers in Urbana, produces results that allow and permit large scale surveillance testing,” UI President Tim Killeen said in Thursday’s briefing. “That combination is a key to curbing the virus, allowing isolation early enough to limit the spread of the infection, and it also identifies and isolates people with asymptomatic cases who would otherwise spread the virus unknowingly.”

Students, staff and faculty at the University are required to get tested at one of these facilities at least twice a week in order to remain in good academic standing. A recent negative test must also be presented either through the Safer Illinois app or website in order to get into academic buildings.