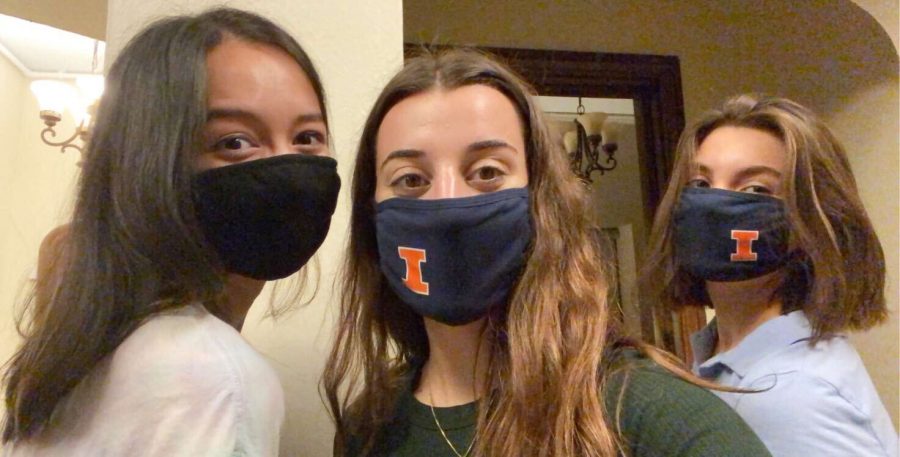 Eleni Sakas, second from left, poses in the Alpha Omicron Pi sorority with her house sisters. Sakas’s sorority has been adapting its recruiting and party practices for the fall semester.

As the University reopens for the fall during the COVID-19 pandemic, Greek life will look entirely different for participating students this semester.

According to data from the University Fraternity and Sorority Affairs, there are 90 Greek organizations on campus made up of 7,056 undergraduate members. Since nearly 25% of the University’s current population are members of a fraternity or sorority, Greek life will play a critical role in stabilizing the spread of COVID-19.

With in-person recruitment limited, sororities and fraternities are finding alternate ways to get students to go Greek.

Eleni Sakas, sophomore in Media, is the historian and Dads Weekend chair at Alpha Omicron Pi. The Panhellenic Council recently announced formal recruitment for their sorority chapters would be virtual this fall, forcing sororities like Sakas’s to communicate with potential members online instead of in-person.

“We have had to adjust so much about our recruitment process,” Sakas said. “For example, we are not allowed to tour the girls around the house, which is a vital part in getting the full feel of the sorority.”

She added that times are tough socially and financially, and that it has been hard not having students back on campus.

At the beginning of every semester, there is an abundance of social events hosted by fraternities and sororities. This semester, Greek life will have to implement COVID-19 protection measures to abide by the new safety regulations by the state and local governments.

“I don’t believe the (socials) will continue on as usual due to the new order that Champaign’s mayor proposed of having no more than 10 people in a certain area,” Sakas said. “At the same time, many girls in the house don’t feel comfortable with others going out to frats, so it’s a delicate balance.”

Champaign’s and Urbana’s mayors both passed emergency orders to limit the size of parties to 10 guests, excluding legal residents of the property.

Sakas added that she believes Greek life has a chance to keep the numbers down if they all band together.

“However, I have heard of frats having parties but requiring attendees to display their negative test results in order to get let in, so an attempt is being made to stay safe, but it’s going to be interesting to see how it all plays out,” Sakas said. “We each have a role in this and need to be looking out for each other.”

Zoe Andrew, sophomore in LAS, is the assistant to the house manager at Phi Sigma Sigma. Andrew said this year’s recruiting will be entirely on Zoom with the utilization of breakout rooms for speaking to the potential new members.

“Technology always causes problems, and having a lot of people on one call can be a little hard to navigate,” Andrew said. “Also, potential new members won’t be able to see our houses, and it might not be as personable because we can only see them through a screen.”

According to Andrew, the rush numbers have gone down significantly, from approximately 1,100 students at this point last year to an estimated 700 so far.

Andrews said while her sorority does not have any social events planned yet, there will be fewer than usual due to virus risk.

“I hope Greek life understands that COVID cases are not something to mess around with, and having social events are not more important than human lives,” she said.