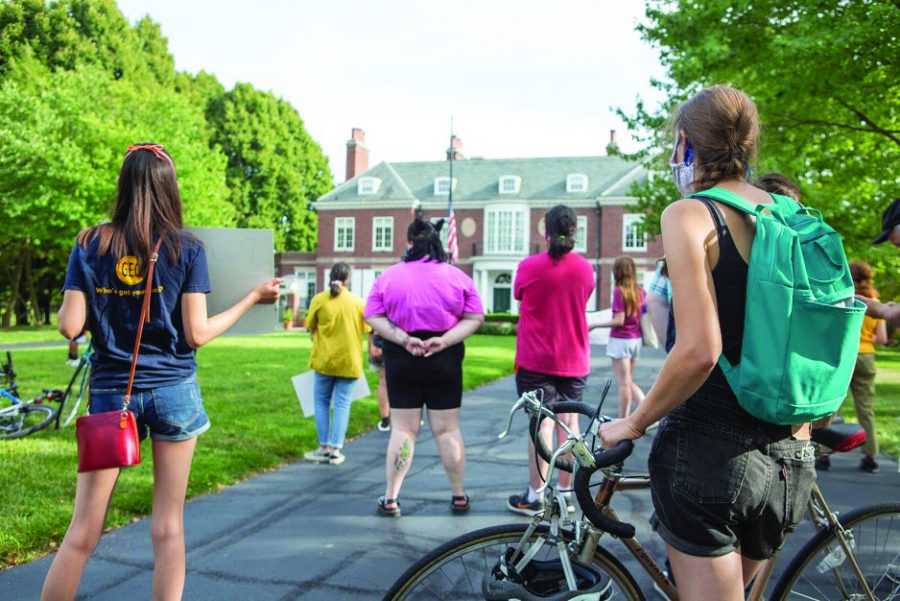 Protesters stand outside UI System President Timothy Killeen’s house after marching from the Main Quad. The participating University students and staff protested to demand hazard pay for frontline workers and reduced tuition among other things on Saturday.

Dozens of University students and staff marched from the Main Quad to UI System President Tim Killeen’s house on Saturday afternoon to protest multiple aspects of the University’s return plan.

Organizers decried the lack of hazard pay for building service workers, who clean and disinfect residence halls and other University buildings, along with unchanged tuition for students despite heavily online schedules, in light of President Killeen’s 40% salary raise approved in January.

“When the BSWs  requested hazard pay as frontline employees, they said no,” Lindley said.  “And you know why they said no? They said no because we deal with measles and mumps on a regular basis, so this fits under our job description.”

Representatives from the Graduate Employees’ Organization marched with Lindley, as did Ricky Baldwin, senior organizer of Service Employees International Union Local 73, which represents 29,000 service employees in Illinois and Indiana.

Baldwin and Lindley described challenging conditions for the University’s frontline service workers. Shifts were rearranged significantly, and if it weren’t for summer negotiations, 100 BSWs would have had to work a grueling 1-9:30 p.m. shift.

This comes as many wings of residence halls — over 400 rooms — have been converted into quarantine and isolation areas for students who’ve been exposed to or infected by the virus.

The workers who clean those areas must wear full-body hazmat suits, “which is a good thing,” Baldwin said, but the extra protection creates new struggles.

To keep out pathogens, hazmat suits are predictably thick. After a while, they become extremely hot to work in, which makes it harder for workers to stave off dehydration and do mandatory saliva tests after their shifts.

“They get over there, they’re dehydrated,” Baldwin said.  “They can’t spit. You can’t drink water an hour before you go.”

One service worker told Baldwin of a shocking encounter with a student on one of these isolation floors.

After finishing up a cleaning shift on an isolation floor that was supposedly unoccupied, the worker entered a room to cast off the hazmat suit.

Just as the worker re-entered the hall, a student ran right into them. Fortunately, the student hadn’t been exposed to the virus, and wasn’t supposed to be on the floor in the first place, Baldwin said. But the experience was rattling nonetheless and showed how precautions can break down in practice.

The diagnostic lab was transformed into a COVID-19 testing facility over the summer. Bradbury still does veterinary research work, but many of her peers were pulled from their regular duties to help with the University’s massive testing load.

“Long before COVID-19 ever existed in our world, we were already struggling for space in our lab,” Bradbury said. “We were hiring people and there wasn’t a place for them to sit down.”

Bradbury said the dichotomy between the University’s safety and its essential workers’ working conditions has been frustrating.

“We go to work in a place where we can’t social distance. We’re forced to work in the same cramped space,” she said.

According to Bradbury, the essential worker title hasn’t been matched with pay. Additionally, though she’s grateful for the University’s testing capabilities, she’s seen workers penalized for system inefficiencies like delayed results.

Like many others at the protest, Bradbury opposed the University staying open. With other institutions closing with fewer positive tests, she called it “grossly irresponsible.”

“How many of us have to die for them to do something about it and shut down the University?” she said.