University holds off on staff program for monitoring campus “disturbances” 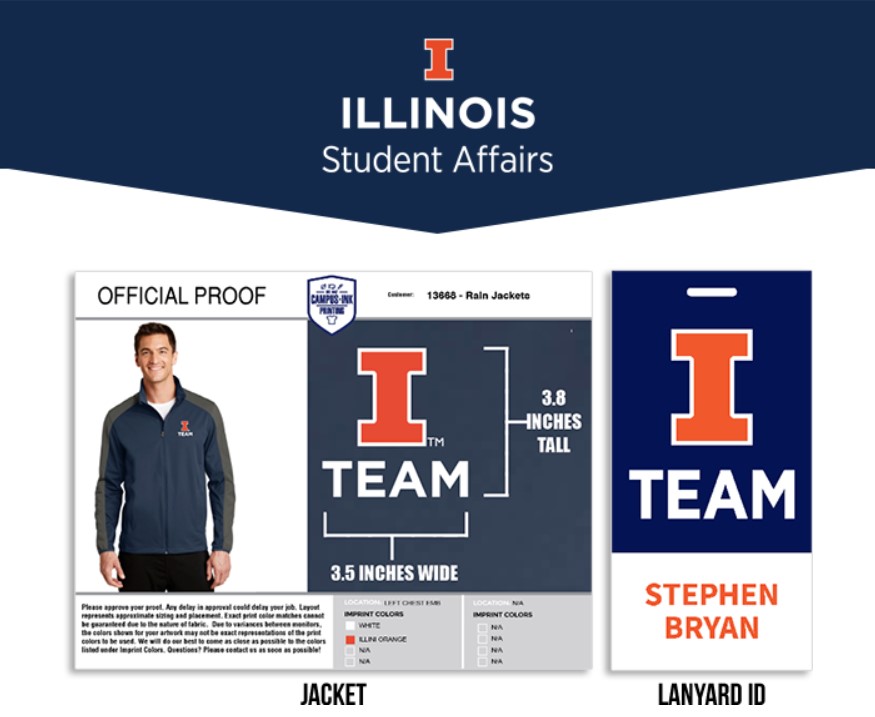 Photo Courtesy of University of Illinois

A mock-up for the I Team depicts a possible design for a rain jacket and lanyard.

Students returning to campus for the semester have been raising their voices about the current political climate by protesting racial injustice in the country, including a well-attended protest Friday night at Alma Mater.

If a University program had gone through, it’s possible these protests would’ve been overseen by a staff made up of Student Affairs professionals.

On July 31, Student Affairs sent out an email about a new volunteer program they had created to help “monitor disturbances on campus.” The volunteer staff would be trained to deescalate potential conflict on campus with potential support from the University of Illinois Police Department if anything illegal were to happen.

Staff on the “‘I’ Team” could attend things like “protests/demonstrations at the Alma Mater, controversial speakers, candlelight vigils, the Homecoming parade or large-scale campus events,” wrote Stephen Bryan, associate vice chancellor and dean of students, in an email. “The University of Illinois ‘I’ Team will be a cadre of staff volunteers who will attend student events on campus that have the potential for being disruptive, interrupted or lead to conflict between parties.”

The email was leaked on social media and was met with a backlash from students who believed that this team was unprecedented and would not help in the long run.

“At first I thought it was a joke,” said Gia Banks, a sophomore in DGS. “I thought it was something one of the troll pages had made, but when I found out it was real I thought that was really sickening because why do you need people to be at our events watching us for whatever activities we decide to do. I believe the school really doesn’t care too much about how the students feel about the events that are happening right now, and they care more about the image that they want to keep up.”

Several students demanded that this team be abolished due to the potential danger it could cause for individuals on campus as well as how it will not help the decrease in gatherings on campus.

The team would be trained on how to approach disturbances on campus and deescalate conflict so that event organizers can continue to have a voice. If illegal activity were to take place, the team can contact UIPD.

The communication between the ‘I’ Team and UIPD created additional questions from the public, in light of recent political discussions around policing.

“There is a lot of tension between people and their opinions and their feelings toward police, and now that the police will be the ones that the school is reporting to, I just don’t feel like it’s a good idea,” Banks said. “There’s already a lot of tension with police, so this is going to just be an added layer of a conflict.”

Due to the large response on social media, the Student Affairs department sent out another email discussing the future of the ‘I’ Team.

“In order to better inform the campus community about the team and solicit more feedback on its design and implementation, the initial rollout of the ‘I’ Team is on hold,” Bryan said. “We’ll use the fall semester to reach out to diverse constituencies on campus to have their voices heard about the envisioned ‘I’ Team, using that feedback to guide us in its possible future implementation.”