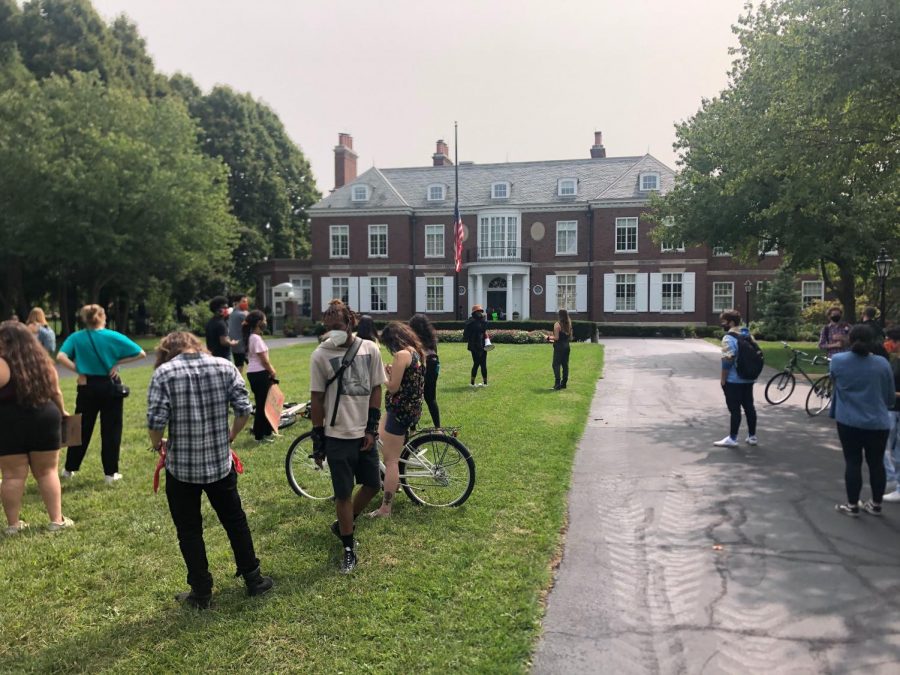 Protesters gather outside of UI President Tim Killeen’s on Monday.

A new organization on campus, People Over Profit, organized their first demonstration today to protest the University’s handling of the coronavirus.

At noon, group members met on the Main Quad with megaphones and called  on passersby to join them as they started their protest. One of the speakers continually asked pedestrians if they were “comfortable going into debt forever for Zoom University,” referencing the cost of tuition as well as most of the University’s classes being held remotely.

Around 50 demonstrators showed, filling up the grassy area in front of Foellinger, spread about six feet apart while wearing masks.

From there, People Over Profit members gave speeches through a loudspeaker to those that would listen. The content of the speeches criticized the University for many things, including not paying University workers hazard pay and raising tuition while President Tim Killeen received a raise.

The group had a few different demands, the first being a 30% tuition refund. “That’s on account of the drastic decline in quality from an online University, based on the educational experience they promised us,” said Nona Porter, senior in Fine and Applied Arts. “These are not online University tuition rates, and people are gonna be in debt forever for this ridiculous excuse of a college education.”

The group is also demanding hazard pay for building service workers, resident advisors, teaching assistants, SHIELD workers and any other University employees at great risk of exposure, along with a contingency plan for the close of campus come November and a meeting with President Tim Killeen to discuss their demands.

The group invited crowd members up to speak as well, including Drake Materre, who was active in many of the Black Lives Matter protests over the summer in Champaign-Urbana.

Diamond Arrington, a junior in FAA, called for the University and her peers to think of immunocompromised students.

“A lot of our neighbors, being my fellow students here at the U of I, have not been considerate of those who have disabilities, of those who are at a higher risk of becoming sick or contracting the virus,” Arrington said. “Because they partied, they went out to bars, they were drinking and they caused our numbers to rise. They were not considerate of anyone that attends our University.”

Arrington also finds blame with the University and its part in opening up campus and putting workers at risk.

“I think it has to be a mutual thing. If our university sets standards, you should expect your students to step up to those standards, and the standard should be consideration.” Arrington said. “It should be care, it should be love.”

Following the speeches on the Main Quad, protesters marched to Killeen’s residence and arrived at the President’s House at 1:30 p.m. They chanted on the lawn for Killeen to come speak with them. Killeen stayed inside the house.

Someone from within the house came and told protesters that Killeen was in the middle of a formal boarding meeting.

University Police arrived at the President’s House around 1:45 p.m. and informed the protesters that they needed to leave the property because it was privately owned. Protesters dispersed around 2 p.m.