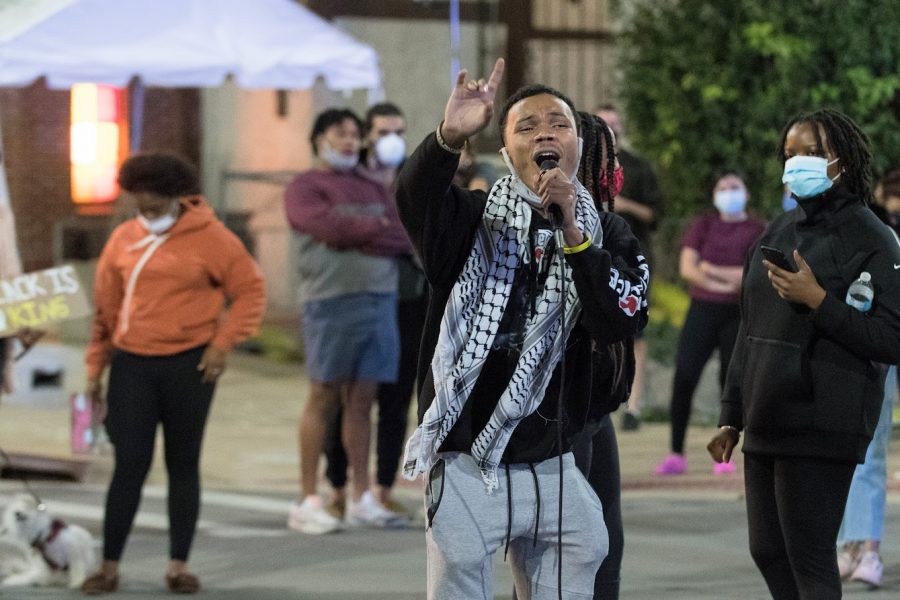 Organizer Drake Materre, a graduating senior in the college of AHS, speaks to protestors outside of Red Lion during the Dead Lion protest on Thursday, Sep. 17.

Late Thursday night, demonstrators gathered around Alma Mater before protesting campus bars The Red Lion and KAM’s, along with their owner, Scott Cochrane.

The protesters congregated around the statue beginning at 8 p.m., where they drew with chalk on much of the surrounding sidewalk. There, Taliah Ray, senior in LAS, spoke to the crowd about why she organized this protest, referencing a specific instance that she experienced at The Red Lion. This demonstration follows another from earlier this summer, also organized by Ray, and both  demonstrations protested alleged racial discrimination by the two bars.

Ray said that the target audience for this protest is the patrons of the two bars.

“I definitely want their patrons to feel this,” Ray said. “I want them to know what they’re doing is not right.”

At around 8:40 p.m., the demonstrators began marching down Green Street. Reaching The Red Lion, they stopped in the intersection of Green and South Third streets after University Police blocked the protesters from standing outside the front doors of the bar.

While in the intersection, they chanted and had speakers take over and deliver speeches through a loudspeaker. One of the speakers was Drake Materre, a recent graduate of the University, who appeared at most of the protests in Champaign-Urbana throughout the summer and beginning of this school year.

“The momentum is never-ending,” said Materre. “We’re gonna be out here. It’s a new time, a new day. The time for de-escalation is no more.”

He went on to discuss the “material change” that local protesters have achieved since beginning this summer. These included Urbana City Council voting to decrease the city’s police budget by about $120,000, the Unit 4 school district declaring racism a public health crisis and Unit 4 also allowing Black Lives Matter symbols within schools, which it previously had not.

During this time, insults were hurled at the demonstrators from onlookers on the street, The Red Lion patrons and from inside the 212 East apartment complex. A large sign the protesters had been carrying, which read “Frats are the Virus,” was taken and thrown after being posed in front of for pictures by people uninvolved with the protest.

Moving on from the intersection, the group continued down Green Street and stopped in front of KAM’s. By this point, KAM’s had closed and there were only workers left in the bar, but protesters still delivered speeches and chants. The group was flanked by University Police on First Street, who kept cars from turning onto the road.

On their way back from KAM’s to Alma Mater, Ray and other protesters were stopped and engaged by people outside of the protest, who seemed to be intoxicated. An argument began, but protesters ended the interaction and moved on before it got hostile.

The protest concluded after 10 p.m. with a speech from Ray in front of Alma Mater.

“My ultimate goal is to get (The Red Lion and KAM’s) shut down,” said Ray.

Materre, when questioned about his methods for protest, said “This is the main step to political organization. Getting out in the streets but also including voting. Voting is essential.”