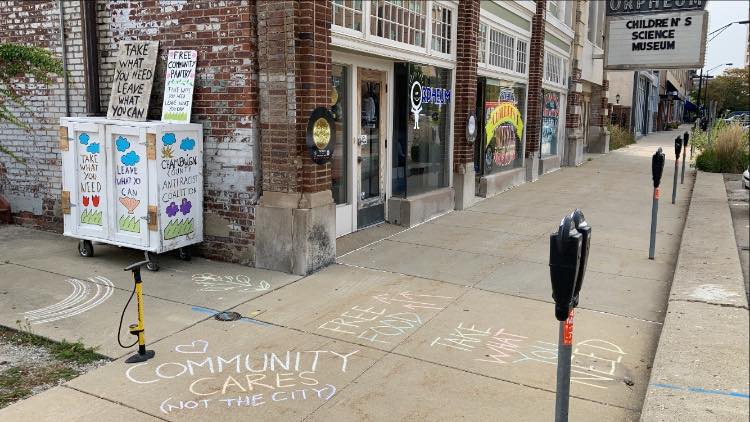 Words drawn in chalk are displayed outside the Downtown Community Food Pantry near Orpheum Children’s Museum on Tuesday afternoon. The pantry’s keepers were forced to move the pantry from its spot on Washington Street for blocking a sidewalk.

Several community members spoke up at Tuesday night’s Champaign City Council meeting about the forced move of a small food pantry which serves low-income and homeless citizens in Downtown Champaign.

The pantry was located on a sidewalk on Washington Street near Neil Street. On Tuesday morning, a handful of city workers approached the site with a pickup truck, ready to remove it.

The city’s workers told the pantry’s creators that their structure was the recipient of multiple anonymous complaints, and it had to be moved for violating the city’s right-of-way ordinance.

After several minutes of conversation with the workers, maintainers of the pantry, Champaign residents Justin Hendrix and Rita Conerly, agreed to move their pantry to a different location, and the city workers drove away.

Within a couple hours, the pantry was rolled across the street, near the Orpheum Children’s Museum. Conerly live streamed much of the encounter on Facebook.

People who upkeep the pantry, and some city council members, said that the city response was an overreaction and expectations weren’t adequately communicated.

“I know that the ordinance it was concerned about was the city right-of-way, but (the pantry)sits in front of a vacant lot. There’s an alley right there for a fire truck to pull into, it’s not an emergency,” said Marshall Allston-Yeagle, Urbana resident and creator of the pantry. “I just wish the city had directly reached out to us before wasting energy to move something aggressively, and the resources within it.”

Conerly also spoke, saying the city displayed “a lack of concern” for the vulnerable “by attempting to remove a food pantry from Downtown in a food desert in the middle of a pandemic.”

Wiman said she corresponded with Conerly in “late July, middle of August,” when the pantry was on the south side of Washington Street, and that the pantry was soon moved to private property on the north side of the street.

When the pantry was again moved to a public sidewalk in the last week and a half, the city posted a 72-hour removal notice on the pantry on Friday. At 9 a.m. on Tuesday, the pantry would be abated, and the pantry’s owners would have five days to claim its contents.

However, Wiman said the owners of the pantry were not contacted via any other method than the paper notice.

“Could we do more to reach out? Absolutely,” she said. “That was the point of the 72 hours. We thought we were being generous by offering to hold the material. That’s why we offered to hold it for another 5 days. It is my understanding that it is now on private property, so the case is considered closed.”

Councilwoman Clarissa Nickerson Fourman represents Champaign’s District 1, where the incident occurred. She called the city’s response “reactionary” and “agitative,” criticizing the lack of extra communication with the pantry’s representatives.

“You guys can throw ordinances at me and tell me why it’s OK,” Fourman said. “I want to ask the human nature part of it is: Why are we OK with taking food away from people?”

“I don’t like when we’re shutting down food pantries, especially during a pandemic,” he said. “I don’t know how well it speaks to our soul. I would be open to at least reviewing our regulations on that and having that discussion.”

Brian Dunn of Champaign attested to the critical role the pantry plays for nearby residents.

Conerly knows folks who stop by the pantry nearly every day for food and toiletries.

“Instead of removing a much-needed resource, how about the city consider collaborating with pantry creators to create solutions and join the community’s efforts in giving back, helping others and showing what community looks like through acts of love,” Conerly said. “That’s what this specific pantry has been a representation of.”

Councilman Will Kyles and Mayor Deb Frank Feinen both said the city is “not at war” with this food pantry, but emphasized that the ordinance should be applied in an even-handed way.

“The reality is, if I say ‘you don’t have to follow that ordinance because I believe in feeding the homeless,’ because I really do, then there’s going to be somebody who sticks it to me on another ordinance, and says ‘Oh, so you believe in choosing ordinances?’” Kyles said.

With the pantry in a legal spot, Feinen was confident that the situation could be sorted out.

“I am convinced that we can figure it out in a way that maintains an accessible sidewalk,” Feinen said.  “We need people to be able to get their wheelchair or walker or whatever it may be down our city right-of-way.”