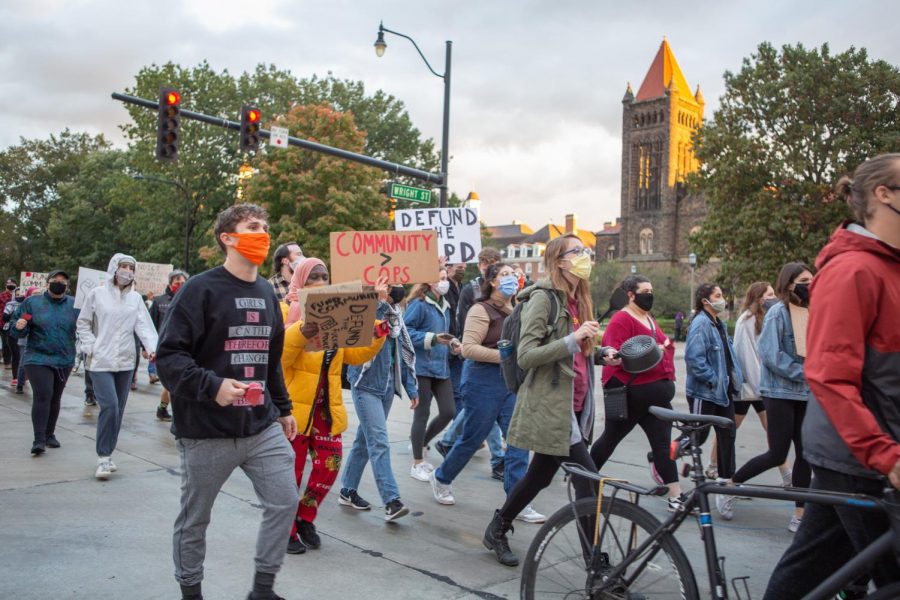 Demonstrators march through the intersection of Green Street and Wright Street during the UIPD protest on Thursday. Protesters marched from the Illinois Police Department Headquarters to the University of Illinois Police Training Institute.

On Thursday evening, protesters gathered outside the University of Illinois Police Department headquarters equipped with pots, pans and megaphones.

This wasn’t a regular protest, but what is known as a cacerolazo: a form of protest in which participants bang pots, pans and kitchen utensils together to create noise.

The demonstration was a collaborative effort between many different activism-oriented campus groups. This included the Graduate Employees Organization, Defund UIPD, Black Students for Revolution, People Over Profit Champaign-Urbana and Champaign County Anti-Racist Coalition, among others.

Beginning at 5 p.m., individual demonstrators began giving speeches and sharing experiences of racism on campus, as well as instances of combating racism. One protester rapped a song he had written himself.

Austin Hoffman, graduate student in LAS and one of the lead organizers within the GEO, delivered many demands to the University. One of these demands was for the University to divest from the police budget and use those funds for the African-American studies department, Counseling Center and other mental health resources on campus. He also demanded the University cut ties with companies that profit off prisons and invest more broadly in the community and Black students, faculty and staff.

“We are only asking UIUC to live up to its peer institutions,” Hoffman said.

Candice Livingston, graduate student in EPOL and Defund UIPD organizer, explained the significance of the Oct. 1 date for this protest.

“The University of California System Cops Off Campus Coalition chose this day as the starting point for their year-long struggle to get police off of their campuses by fall 2021,” Livingston said. Their protest was meant as an act of solidarity.

A little after 6 p.m., the group of demonstrators began marching, moving down to Green Street and taking it to Fourth Street, before heading south down Fourth Street and stopping in front of the Police Training Institute.

There, the microphone was handed to Drake Materre, a recent graduate of the University and avid activist. He gave a moving speech and was followed by speakers from Students for Justice in Palestine.

The protest concluded just after 7 p.m.

“After today we will be continuing with the education,” Livingston said. “We will have more direct actions, we will be doing more collaborations, and we will be directly addressing the administration.”