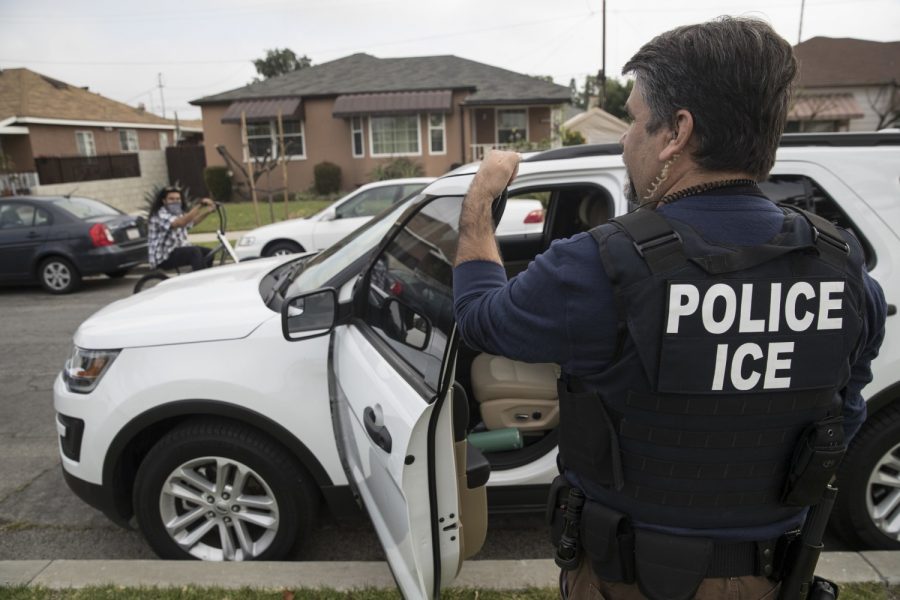 ICE agent Jorge Field stands outside the home of a 47-year-old Mexican national in Montebello, California. The University opposed a rule to eliminate “Duration of Status” admission.

The University of Illinois vehemently opposed a proposed rule to eliminate “Duration of Status” admission for international students, scholars and their dependents.

The rule, published in the Federal Register on Sept. 25, could inconvenience many of the 9,363 international students enrolled at the University, adding a paid application for those who need to stay in the states longer than a predetermined time.

“Removing DS means that anyone coming on these visas, instead of getting DS, will receive a date by which they have to return,” said Martin McFarlane, director of International Student and Scholar Services. “If they want to extend that date, they will have to go through a lengthy application process that will take months and cost money, as opposed to doing it with their school, which takes days, and is free.”

These decisions are currently being made by academic professionals who are aware of the details of the program and understand the nuances involved which may lead to different times of completion for different individuals. The implementation of this rule would instead rely on the United States Citizenship and Immigration Services immigration officers to evaluate whether there is a compelling academic reason for extending these programs.

“It could require academic advisors and the students having to write explanations regarding their research which may or may not be listened to,” said McFarlane, who added that the process was unnecessary to the existing system.

The ISSS News Blog issued a post with strong opposition to the proposed change just five days after the rule hit the register, stating that “Duration of Status” is a unique type of entry available to international students and scholars that allows admission to the United States for those who are coming to the U.S. on F and J visa categories.

“We greatly believe in the value our international students and scholars bring to our campus and community, and creating uncertainty over our students’ ability to complete their programs is an unreasonable action,” ISSS wrote in its post.

F and J visas are unique as unlike other visas, as instead of getting a fixed date by which they have to leave the country such as in an I-94, they have D/S written on their visa. This is because the recipients are unsure of how long their program is going to last.

These visas have additional documents, such as I-20 and DS-2019 for F and J visas, respectively, which contain program information and the expected date for program completion. This document is controlled by the program sponsor, which in this case is the University.

Therefore, with the help of academic advisors and departments, the University can grant extensions which may be required due to unexpected delays in research and medical issues.

All this, however, may change with the elimination of this rule.

The USCIS has said that the maximum time period that one can be admitted to before you require an extension is four years, which may also not be guaranteed for certain countries that have been listed by the department of state for various reasons. This uncertainty may also result in students preferring other study destinations over the U.S.

“The University opposes this, and is currently discussing this at the system level, so not just the University of Illinois at Urbana-Champaign, but Springfield and Chicago as well, and we plan on responding comprehensively with a list of reasons as to why this is bad, not just for the University, but for higher education in the United States,” McFarlane said.

He said the response will be reviewed at the “provost, chancellor or president level,” and it would be submitted before the 30-day comment deadline.