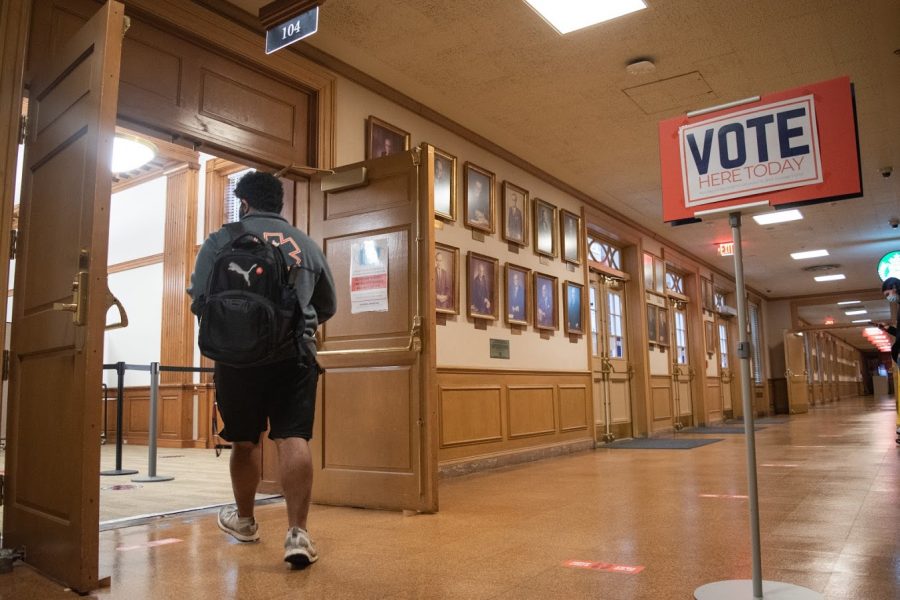 A student enters the early voting site located at the Illini Union on Friday afternoon.

Following the opening of the three on-campus voting locations on Oct. 19 at the Activities and Recreation Center, Illini Union and University YMCA, a multitude of students who are first-time voters have taken advantage of the opportunity to cast their ballots.

Because of COVID-19, the University has taken precautions to ensure the safety of those participating in early on-campus voting. A few of these include the implementation of stickers mandating appropriate distancing between voters, face masks and sanitized pens, said Aysha Ahmad, a sophomore in LAS.

“As I entered the room, I saw that there were stickers on the floor to indicate distance between one another, so it was really nice that they took that step to place the stickers and make sure everyone was on them,” Ahmad said. “When I went to get my ballot, everyone had their face masks on and had their shields, which they were really protective about. They had sanitized pens and would collect them at the end to resanitize them, and the booths were set distantly.”

The process itself was rapid and easy, said Jacob Krueger, a freshman in Gies. The registration entailed verification of his identity by means of his last name, date of birth and two forms of identification. Afterward, he was directed to a voting booth where he was able to privately fill out the corresponding bubbles on his ballot.

“The ballot itself was really easy to read, and it was well-categorized,” Krueger said. “When I was done, the lady instructed me to bring my ballot to her, and she then gave me a little sticker and shoved it into the machine. The whole process itself took about ten minutes. It was really quick and really efficient.”

Both Ahmad and Krueger attributed their decision to vote early at one of the on-campus locations to perceived uncertainty and risks associated with voting early via mail-in ballot.

“I have anxiety, and I feel like doing a mail-in ballot was too much of a risk,” Ahmad said. “I would rather go in-person, vote in-person and feel better about it than the mail-in ballot where I would just be worried about it being accepted and everything.”

Krueger echoed similar sentiments when explaining his decision to vote early at the ARC.

“(I voted early at the ARC because of) the idea of handing it in personally and not having to wait for it in the mail since I know there’s a lot of speculation about whether or not mail-in ballots would be valid or not or whether they could get lost,” Krueger said.

Despite this shared fear, the state of Illinois has been adamant that local election officials are well prepared for the large amount of anticipated mail-in ballots and that individuals will be alerted about any issues. In Champaign, there are specific procedures in place where the County Clerk’s office will contact any individuals if issues arise.

According to the County Clerk’s website, “if you log into My Voter Information, it will tell you when your ballot has been received by the Clerk’s Office. If there is anything that would prevent your ballot from being cast, the Clerk’s Office would contact you immediately to rectify the issue.”

As reported by the U.S. Elections Project, 31,600 individuals in Champaign County have requested mail-in ballots and 15,657 of those have been returned as of Oct. 23.

Both individuals additionally delineated the importance of voting as a civic duty and a means for change.

“I came from Pakistan originally and became a citizen of America, so I consider this as one of my duties that I should fulfill as a citizen of America,” Ahmad said. “While growing up, my parents always voted, and I was surrounded by people who always encouraged and motivated me to vote.”

Krueger also explained the role this duty factors into his decision to vote early, emphasizing the importance one vote can hold.

“I have always loved the idea of voting,” Krueger said. “I think it’s great to do your civic duty and participate in deciding who runs the country, which is a really important idea even if you’re just one vote — one vote matters.”