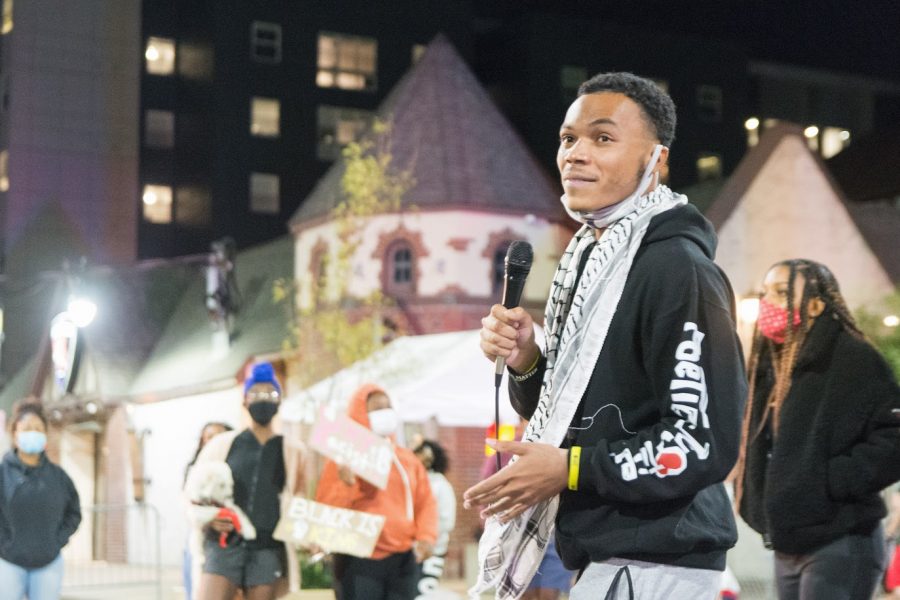 Student organizer Drake Materre speaks outside of the Red Lion bar during the “Dead Lion” protest on Sept. 17. Materre has recently turned his focus to food insecurity in the Champaign County area.

With winter approaching, a student activist on campus specializing in community health co-authored a passed resolution to help combat food insecurity in Champaign.

Drake Materre, senior in AHS, took part in many different protests over the summer, including one in which he was able to speak with Gov. Pritzker about the “need for proper social distancing, ample PPE for homeless shelters, and the need for public housing during the pandemic and beyond.”

The Champaign County Anti-Racist Coalition, a coalition of organizations that came together in order to organize different protests in the summer as a part of the Black Lives Matter, was co-founded by Materre. These protests are continuing into the school year on campus, beginning with a protest called “the welcome” organized by the Champaign Anti Racist Coalition.

Materre is also a founder of Black United Front and a member of Black Students for Revolution. Through these organizations, Materre has worked on organizing protests, spreading awareness on transformative justice, and on Project 1,000.

The resolution also called for the Illinois Student Government to actively partner with other organizations on campus and “advocate for the funding of community food resources by the University of Illinois.” The reason for this call to action listed in the resolution was “the poverty rate for all individuals in the measured population in Champaign County was roughly 20% from 2005 to 2017,” according to numbers provided by the county Regional Planning Commission.

“Food insecurities are a major reason for domestic violence, and it goes unnoticed,” Materre said. “I really do believe that with a diversion program built around food and ensuring food security, you can see some changes happening.”

In addition, he has been combatting environmental racism that the Fifth and Hill community in Champaign faces because of toxic chemicals left behind at a gas plant in the area. He is working on ensuring the chemicals are cleaned up even though a lot of the health problems individuals in the community face are already irreversible.

“A lot of people in that area which is predominantly Black and Brown have had rare cancers and deaths,” Materre said. “This has been a fight that has been going on, but at this point, we’re trying to win that fight.”

Materre is also a senior project manager of Natural Path Nutrition, a non-profit organization that actively works to deliver resources to “high-risk individuals and families in marginalized communities.” He is currently conducting a nutritional education program with five young black girls who are in public school in Champaign.

He has been speaking at police listening session meetings run by the Champaign Police Department in order to share his concerns with the community and suggest different programs to alleviate police responsibility.

In one session, Materre mentioned a diversion plan which he refers to as an “innovative process in which you shift the responsibility of transformative justice and rehabilitation to the community instead of the incarceration program.”

The diversion program Materre plans to implement would divert police officer response from certain domestic violence calls and instead allow social workers and community members to get involved. It would also provide more resources to targeted areas of the community that need food.

“Especially in the age of coronavirus and especially because it’s winter, it’s about to be deadly and about to get cold, ” Materre said. “It’s about to be the worst time in America’s public health so the work that needs to be done is essential now more than ever.”

Materre is hoping that this will be the first step in implementing the diversion program and letting the University donate their plentiful resources, specifically food, to targeted areas within the community that need the resources the most.