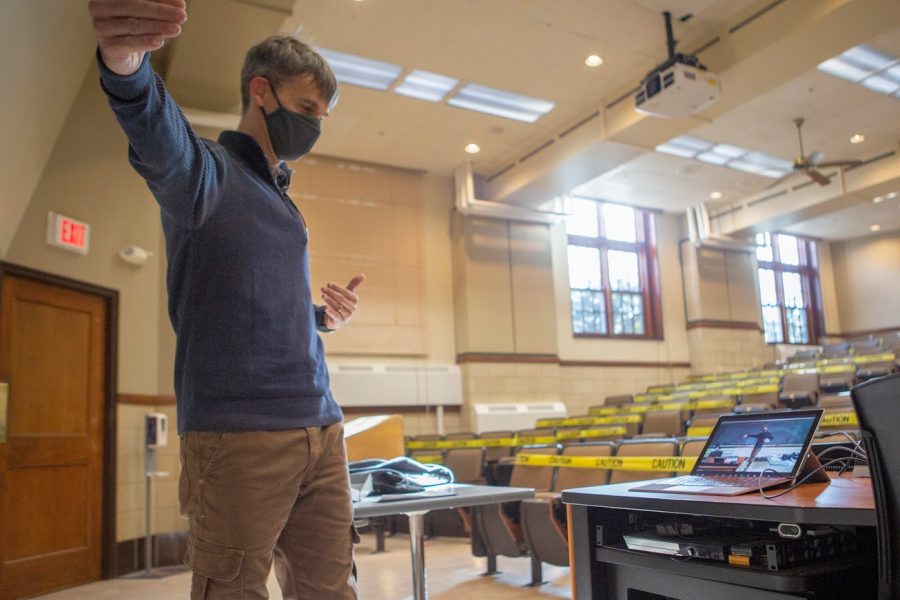 Professor Peter Abbamonte checks to see if he’s in frame for his students who choose to attend his Zoom lecture on Monday. Many students cite poor mental health when asked why they do not attend in-person classes.

In the Fall 2020 semester, most classes at the University are instructed completely online due to safety reasons concerning COVID-19. However, in the physics department, one professor chose to do the opposite: teaching his 90-person physics class in-person.

Yet student mental health struggles seem to have led to a sharp decline in in-person attendance.

Peter Abbamonte, professor in Engineering, is currently teaching Physics 435: Advanced Electromagnetism I this semester. Instead of offering the class explicitly online, he chose to deliver his lecture in-person in Gregory Hall and simultaneously broadcast it over Zoom.

At the beginning of the semester, there were around 30 students who chose to attend the class in-person, but gradually the number declined to just five students. Mental health seems to play a big part for students to decide whether to come to class physically, according to Abbamonte.

“I actually sent out a survey to my class this week,” Abbamonte said. “I asked them: ‘Why don’t you come to class?’ and a lot of them said ‘I want to go, but I’m just too depressed to get myself out of bed.’”

A great disadvantage of not having students coming in person is the lack of feedback during the lecture.

“It’s harder on the professors because there is just dead time,” said Mark Bernhardt, professor in economics and finance. “You’re not really sure if something is sinking in because you don’t have the visual cues.”

According to Jon Willits, Assistant Professor in the Department of Psychology, teaching via Zoom feels like “competing with YouTube videos.”

“I think what Zoom has done is to create the illusion of engagement,” Abbamonte said. “You really think you are in class, but you are really just watching TV. It’s sort of like learning to be a doctor by just watching Grey’s Anatomy. I don’t really think it’s working.”

To protect professors and students who decide to come to class in-person, the University installed various safety protocols, including new airflow systems in the building, requiring everyone in the room to spread out and wear a mask, and restrict entry to the building if the person does not have building access on the Safer Illinois app.

“Having gone through this, I really feel like teaching in-person is safe,” Abbamonte said.

On the survey that Abbamonte sent out recently, the five students who come to class in-person all reported they are doing as well as they would in a normal semester.

“If we can get people to come I think we can make a big difference,” Abbamonte said.

In order to improve classroom engagement next semester, Abbamonte said he wants to introduce “some kind of incentive.”

“One thing I was thinking of doing was having a wake-up call,” Abbamonte said. “I’ll have people give me their cell phone number, and when I’m walking to class, I’ll just call them and wake them up. I figure I can call about 30-45 people during that walk.”