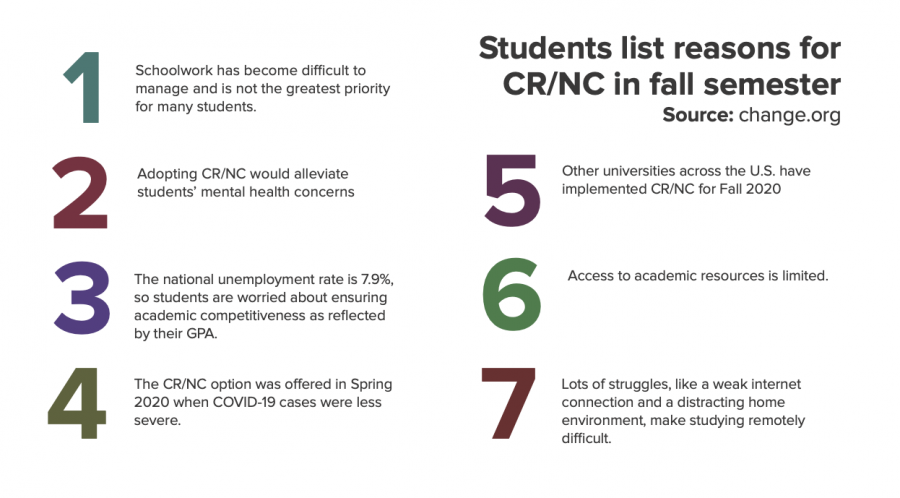 Following the mandatory transition toward majority online courses, many students, in addition to having limited access to on-campus resources, have indicated increased levels of stress and anxiety.

As a result, Nathan Jenni and Kushal Amilineni, seniors in Engineering, composed and published a petition on Oct. 25 calling for the University to implement a credit/no credit option for Fall 2020.

Entitled “UIUC CR/NC (Pass/Fail) Option, Fall 2020” on Change.org, the petition has been circulated on social media platforms like Facebook, Reddit and Instagram. As of Monday, it has obtained around 4,700 signatures and amassed a multitude of comments indicating enthusiastic support from students, parents, graduates and some teaching assistants.

The petition cites both the administration’s previous choice to implement CR/NC for Spring 2020 when the pandemic was less severe and the increased levels of stress and depression as the most critical factors that influenced its creation.

“It doesn’t really make sense why they would give it to us in the spring semester when there were only a few thousand cases around the United States, but not now when there are around 8 million or something like that,” Jenni said. “We also thought it didn’t make sense that we should be graded more harshly now compared to back in March when the situation wasn’t nearly as bad because now pretty much every person knows at least one other person personally suffering from the virus.”

While the University has focused extensively on maintaining the physical wellbeing of its students amidst the COVID-19 pandemic, the efforts should also extend towards protecting mental health, Amilineni said.

“Our thought process behind it was that the University has put so many things in place for our physical wellbeing in terms of COVID, so why can’t they help us with an infrastructure that helps us with our mental health by giving us a CR/NC option?” Amilineni said. “It’s not unheard of. A lot of other universities are doing it.”

The spike in exacerbated states of mental health was specifically noticed by Jenni on the r/UIUC subreddit, which is a common place for students to vent about their struggles.

“(While it’s normal for students to vent about their weeks on the subreddit), we just thought that the rate at which we saw posts about stress this semester was really concerning,” Jenni said. “And also we’ve seen several posts with photos of some graffiti around campus, and it wasn’t just some regular graffiti. It had some element of anxiety, stress and mental health, and it made it clear that mental health was an issue.”

These reportedly high levels of stress and anxiety are attributed to the transition toward online courses while having to simultaneously balance the effects of a pandemic. Because classes are so difficult and different, the CR/NC option is helpful in enabling students to have a say in how these classes are affecting their GPA, according to Fildaus Umutoniwase, sophomore in Social Work and proponent of this petition.

“Classes this semester have been extraordinarily hard, and everything is different — the way we are taking classes especially,” Umutoniwase said. “A lot of the time, we are teaching ourselves a lot of the stuff, which makes it even harder. It gives you the opportunity to get credit for a class that you passed, which is a good thing because if it’s not a possibility, you can get a B and it’ll go on your transcript and affect your GPA.”

However, despite the support from the University community, the work has not yet been completed. Amilineni and Jenni have now focused their efforts toward locating organizations that will endorse the petition and other universities that have officially implemented CR/NC for Fall 2020.

“Now we are working with the (Illinois Student Government) Senate and trying to get more fraternities, sororities and social organizations on campus to endorse the petition because it gives us a kind of credibility,” Amilineni said. “We also want to research more to add to the petition and to our discussions with the University, saying, ‘Hey, these are the universities which took it up, and this is how it looks from last semester.’”

While the petition has not officially been brought to the ISG Senate yet, it is currently in a stage where a resolution is being drafted, according to Dana Yun, junior in Engineering and ISG Senator.

“We’re in the research and development phase where we’re looking at what other schools are doing and trying to gauge student interest, which is one of the things that the provision can provide, giving students voices in this situation,” Yun said. “It hasn’t been back to the Senate yet because we want to give a solid resolution with strong stories and facts behind it in order to support the case.”

Although both Jenni and Amilineni are not certain whether the proposal will pass, they are for now simply hoping to work alongside the University.

“I in particular don’t know what the odds are, and I don’t really want to think about it yet because it’s not a win or a loss,” Amilineni said. “We’re just putting forward an idea which we want to work with the University with to tell them, ‘Hey, this is how you can help us. What do you think?’”