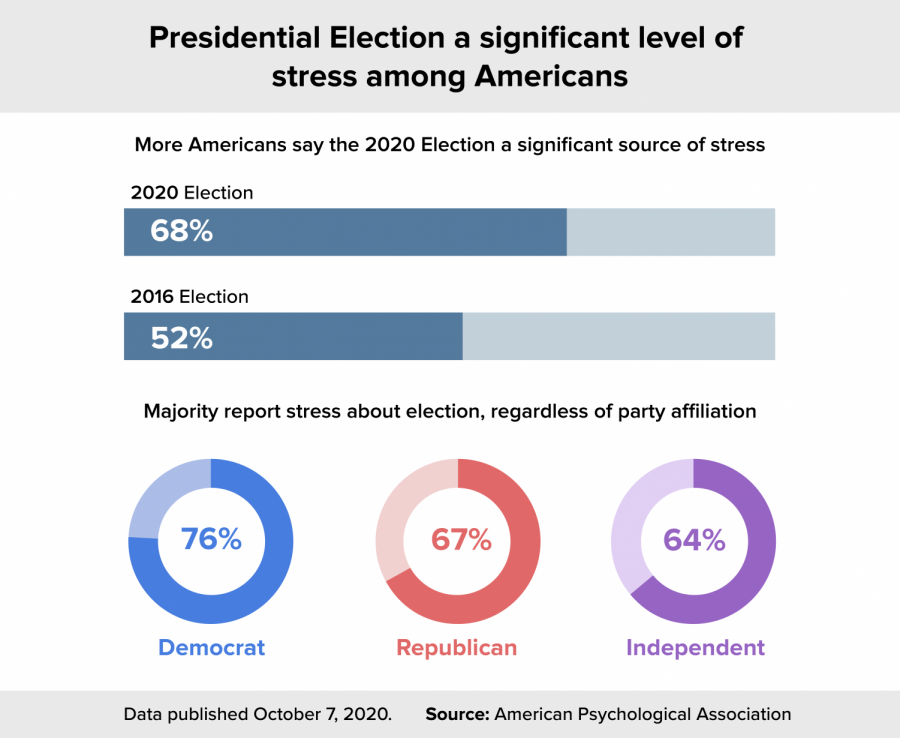 With the lengthy nature of the 2020 presidential election that took four days for a winner to be officially declared, students are recovering from increased amounts of stress and anxiety.

During an online University Counseling Center workshop on Nov. 3 titled “Coping with Socio-Political Stress,” attendees were asked to type how they felt about the election in one word.

Words such as “stressed,” “scared,” “anxious” and “overwhelmed” quickly filled the screen.

Deidre Weathersby, associate director of outreach and prevention at the Counseling Center, says this election felt especially stressful because it was experienced in the midst of “multiple pandemics,” such as radicalized violence and COVID-19.

“There’s a continued rise in the level of anxiety that students that seek counseling center services are experiencing, and this year is no exception,” Weathersby said.

Shiv Bhatia, sophomore in AHS, says he had been following the election closely by constantly checking results and updates, as well as playing a CNN live stream of the news in the background.

Bhatia says the election had started to take a toll on him, resulting in feeling burnt out and spending an inadequate amount of time on homework.

“You can experience a lot of emotional and psychological fatigue from having a constant news cycle of what’s going on,” Weathersby said.

Bhatia says it was hard for him to not consistently check the news.

“I guess you could chalk it up to (fear of missing out) in a way,” Bhatia said.

Weathersby says it can be helpful to have at hand a list of 10 things to do that are healthy distractions, however simplistic it may seem.

“You just need to do one small thing to stop the cycle,” Weathersby said.

Jack Anderson, doctoral candidate in LAS and graduate instructor of HIST 263: History of Medicine in the United states, says he has not been sleeping well and it has been difficult for him to concentrate on work.

“There’s too much in flux … everybody feels we’re on kind of a razor’s edge,” Anderson said.

Anderson has also been providing time and space in his class for students to talk about their fears and anxieties.

“It ends up feeling incredibly apathetic and disconnected if faculty aren’t talking about or acknowledging what’s going on,” Anderson said.

Jeffrey Graham, assistant director of outreach and prevention at the Counseling Center, said it’s important to acknowledge what we do and don’t have control over.

“A lot of times we just need to know we’re not alone in these struggles,” Graham said.

Weathersby said it can also be beneficial to connect with friends and family that have shared views to feel affirmed.

“We all, as a community, can care and empathize and connect with each other. I think that is one of the best tools we have is connecting to community,” Weathersby said.