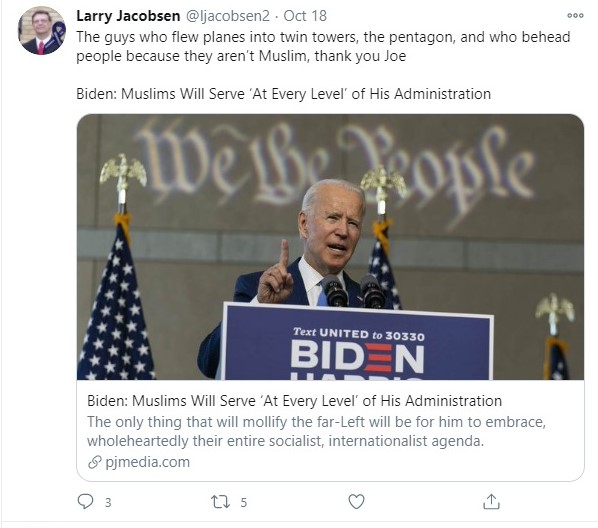 A University employee has resigned after the surfacing of racist and Islamophobic tweets made from his personal Twitter account received considerable attention and criticism from the campus community.

Larry Jacobsen worked as an investigator in the Office of Student Conflict Resolution. Prior to being an employee of the University, Jacobsen was employed as a detective with the Urbana Police Department.

Chancellor Robert J. Jones sent a Massmail in the morning on Thursday, condemning Jacobsen’s tweets and stating that “as of yesterday afternoon (Jacobsen) is no longer employed by the University.”

“These posts are hurtful and antithetical to our University values of inclusivity and respect,” the Massmail read. “They diminish all of us, lessen our sense of community and damage our connections with each other.”

Although the Massmail does not clarify whether Jacobsen’s employment with the University was ended on his own regard or not, a statement posted on Wednesday to Twitter stated that Jacobsen resigned.

The recent Massmail did not mention whether Jacobsen resigned voluntarily, or was given the option to resign or be fired.

“The continued presence of this individual would undermine the trust and compromise our disciplinary process,” the Massmail said.

Jacobsen did not respond to The Daily Illini’s requests for comment.

Jacobsen received negative attention after screenshots of his tweets were posted to the “Spotted in Chambana” Facebook group. The screenshots were then shared on Twitter. A popular tweet contained screenshots of Jacobsen’s racist and Islamophobic tweets. The Tweet has been retweeted 300 times and was favorited 561 times as of Thursday.

The University responded to the tweet on Monday, Nov. 9 with a photo of a PR statement. Office of Student Conflict Resolution Director Justin Brown also responded to The Daily Illini’s interview request with the same statement. 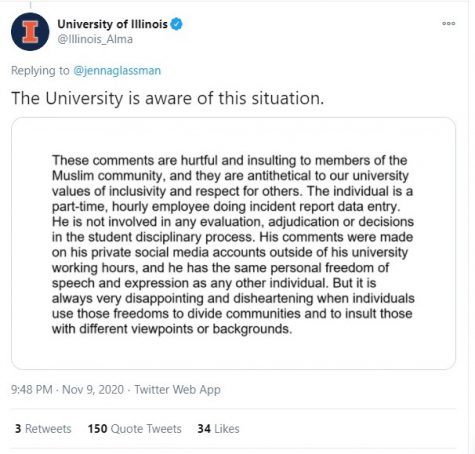 The statement made note that Jacobsen was a part-time employee. According to the statement, his duties consisted of only data entry, and he was not “involved in evaluation or adjudication” during the student disciplinary process. The statement also emphasized that his comments were made “on his private social media accounts outside of his University working hours, and he has the same personal freedom of speech and expression as any other individual.”

Jacobsen’s Twitter profile was not “locked,” or set to private. Anyone with the link could view and interact with his tweets.

After the University released its statement, Jacobsen’s job title on the Office of Student Conflict Resolution website was changed from “Investigator” to “Academic Hourly.” Following his resignation, Jacobsen’s name and position have been removed from the website.

Although Jacobsen’s Twitter profile didn’t explicitly state he was an employee of the University, his bio stated that he was “working as an investigator at a big 10 U,” and had his location set to Champaign, Illinois.

Jacobsen also shared a post from the Illinois Family Institute, which has been designated as an “anti-gay hate group” by the Southern Poverty Law Center, on his personal Facebook page. His Facebook page has since been deleted.

Another one of Jacobsen’s tweets said, in response to a thread about Obama’s calls of tolerance for Islam, read “I won’t tolerate Islam.”

The UIUC Muslim Student Association released a statement on Tuesday, a day after the initial Islamophobic tweets received attention, condemning both Jacobsen’s tweets and the University’s response.

The statement included a demand that the employee should be fired immediately, and for the University to issue an apology to Muslim students for “defending someone who holds such hateful and violent views.” The statement was endorsed by seven other student groups, including the Students for Justice in Palestine, the Underrepresented Muslim and Minority Advocates and Black Students for Revolution.

Yousuf Ahmad, junior in Engineering and outreach director for the Muslim Student Association, helped compose the statement. Ahmad expressed disappointment in the University for refusing to take disciplinary action against Jacobsen.

“We were really disheartened with the University’s response,” Ahmad said. “The fact that the University tried to defend the person instead of holding them accountable was just extremely disappointing for all Muslims on campus. This type of speech on his Twitter is hate speech, it’s very Islamophobic, and there’s no place for that type of language in any type of administration.”

Despite the University’s initial assertion that it cannot take disciplinary action against Jacobsen as his tweets were made from a personal account and outside of working hours, the University has, in the past, taken action against employees for comments made on social media.

The University made headlines in 2014 after the un-hiring of American Indian Studies professor Steven Salaita for tweets critical of Israel during the Gaza War. Salaita was offered a position at the University, scheduled to begin in Aug. 2014. After the Gaza War broke out in July of the same year, Salita took to Twitter, tweeting anti-Israel and pro-Palestinian statements.

Salaita’s tweets garnered attention from students and the media alike. Following the attention of his tweets, along with a campaign from several wealthy donors threatening to stop donating if Salaita was still hired, the University terminated his teaching position.

Michael LeRoy, a professor in the School of Labor and Employment Relations and the College of Law, studies employment law. LeRoy explained that it would have been difficult, albeit not impossible, for the University to have fired Jacobsen for his comments.

“If (the comments are on) a private social media account, the University would have a difficult burden to carry in order to fire someone for those comments,” LeRoy said. “There are times when a private media post is grounds for termination. The fact that the post is on a private media account does not insulate it entirely from an employer’s punitive processes. But, it’s very difficult for that public employer to make that case that it has legal grounds to terminate employment.”