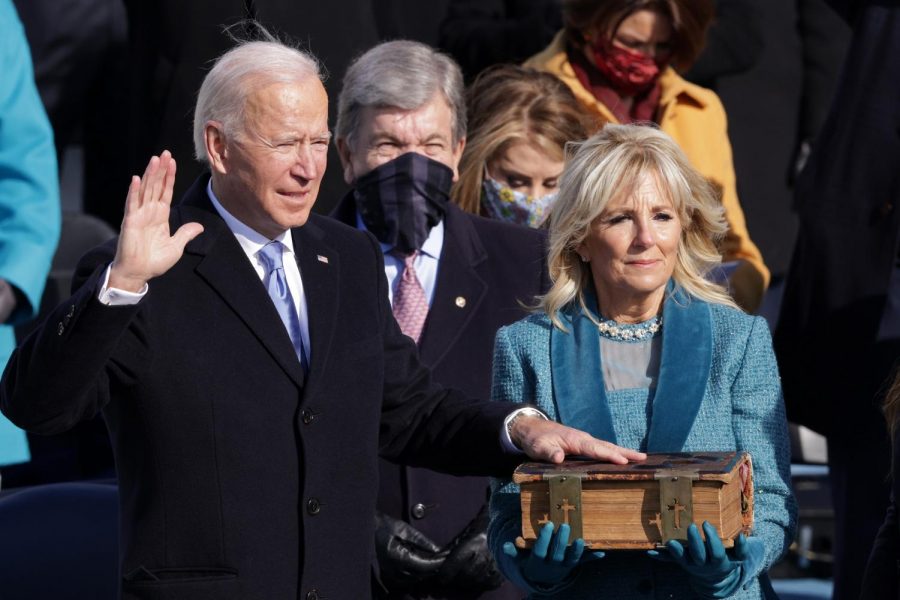 President Joe Biden takes the oath of office from Supreme Court Chief Justice John Roberts as his wife, First Lady Jill Biden, stands next to him during the 59th presidential inauguration in Washington, D.C., on Wednesday.

Here are the highlight moments of the ceremony:

Here is a more in-depth description of the events:

During the Jan. 6 siege of the capitol, Capitol Policeman Eugene Goodman attracted rioters from the entrance of the Senate Chamber to a hall with police reinforcements, which bought time for the Senators to evacuate.

Goodman’s actions earned him the title of Hero of the Capitol Riot, and he was promoted to the acting deputy Senate sergeant-at-arms shortly after. Bipartisan lawmakers also introduced legislation that would award Goodman the Congressional Gold Medal.

On her way to the stage, Harris fist-bumped Barack Obama and Michelle Obama. The trio made up the first Black president, first lady and vice president.

Harris was sworn in by Justice Sonia Sotomayor, the nation’s first Hispanic and Latina Justice. Harris swore on two Bibles, one which belonged to the late Justice Thurgood Marshall, who helped inspired her career path, and one of family friend Regina Shelton, whom Harris recognizes as a “second mother.”

Joe Biden used the same family Bible that he used twice when sworn in as the vice president and seven times as Senator of Delaware.

In his speech, President Joe Biden chose to highlight the aspect of division in the country.

At the end of the ceremony, Amanda Gorman, the country’s first-ever National Youth Poet Laureate, addressed the nation with her poem “The Hill We Climb,” calling Americans to rebuild, recover and reconcile.