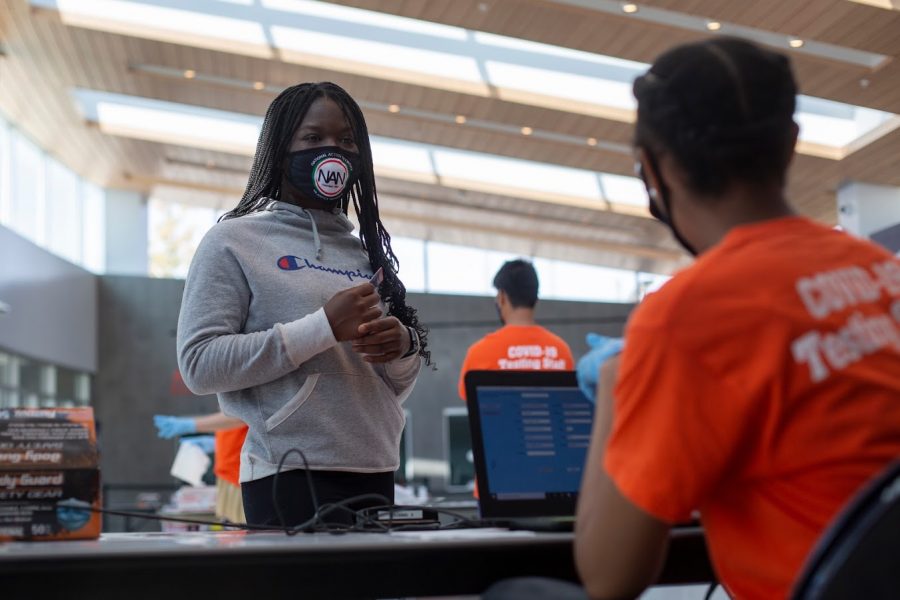 Jessica Osemwngie checks in at the COVID-19 testing site at State Farm Center on Oct. 9. The University’s COVID-19 protocols were widely praised after the campus saw no hospitalizations or deaths in the fall.

The University’s rapid saliva-based COVID-19 test has been altered to give students the option of using a straw or a funnel to assist them in filling a narrower test tube with saliva.

Dr. Martin Burke, associate dean of research at Carle Illinois College of Medicine, said the switch from thicker test tubes to narrower test tubes occurred due to robotics and to make the testing process more efficient.

A robot was invented at the University specifically to make the testing process more efficient by TEKMILL, a contract design and fabrication business located in the University of Illinois at Research Park.

“Engineers came, they saw what we needed, and TEKMILL created these robots just for us,” Burke said.

These two custom-designed robots take off the cap of the test tubes and place it into a rack. A second robot takes the sample out of the tube and places the sample in one of the 96 well plates.

A third robot then takes four 96 well plates, combines them, and loads them into the PCR machine. This robotic addition and switch in test tubes allowed the testing process to be more efficient, which will also assist the University in being able to expand testing to the outside community, according to Burke.

In addition to speeding up the testing process, Burke said the smaller test tubes help eliminate the overall amount of waste collected as a result of testing, which makes them more environmentally friendly.

When it comes to choosing between a straw and a funnel, Burke said he doesn’t think there is a significant difference in the environmental impact. The straws offered are chosen carefully in order to ensure that they are environmentally friendly.

As University students adjust to the new way of testing, some are finding it difficult to fill the test tube with bubble-free saliva up to the marked black line.

Anthony Erlinger, sophomore in LAS, said that his friend was once in the testing center for 30 minutes because he kept being turned away from submitting his test tube and ordered to properly fill it instead.

“It definitely takes longer with the straw than when you were dribbling it into the longer tube,” Erlinger said.

Some students have decided to stick with the straw for the new process, while others find the funnel a lot easier to work with.

“The straw takes forever because technically you’re blowing air into the tube so there’s going to be a lot of bubbles, but the funnel has been the absolute easiest in my opinion,” said Amira Dadar, freshman in Education.

This new change occurred at the beginning of what Burke said “is going to be a very challenging semester” due to the higher percent positivities around the state as well as the new COVID-19 strains from the U.K. However, he encouraged students to keep being diligent with testing.

“We all have to redouble our efforts not get tired because the virus doesn’t get tired, and be really proud of being an example to the country and to the world,” Burke said.