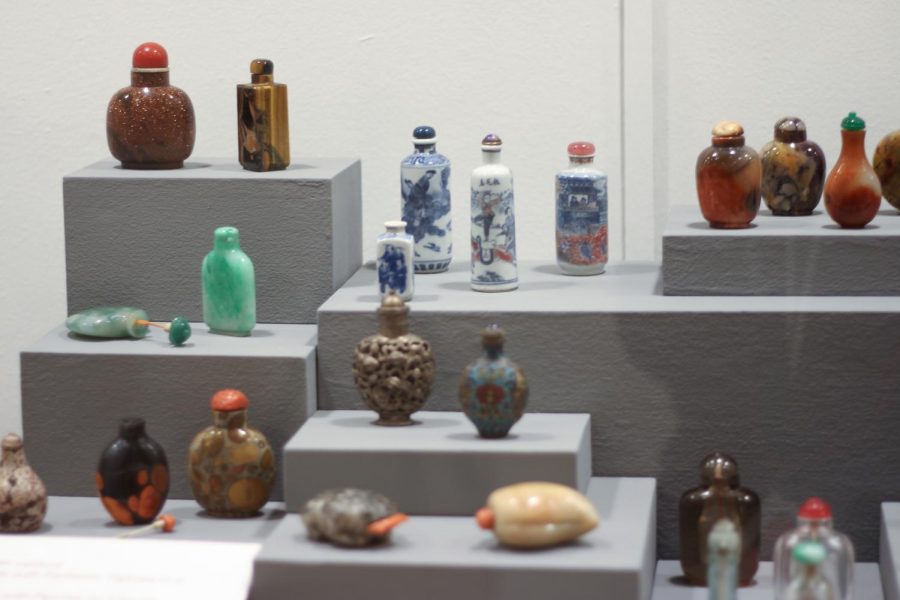 The new Asian ceramics exhibit at the Krannert Art Museum sits in the Moore Gallery of Decorative Arts.

The Krannert Art Museum recently completed the first phase of its reinstallation for the new display of Asian ceramics in the Moore Gallery of Decorative Arts, which is named after local benefactors Theresa and Harlan Moore.

The gallery, which spans the entirety of the west wall, will be open for visitors to view after the University allows individuals to participate in nonessential activities after Feb. 8.

The exhibit’s recent reinstallation featured around 80 Asian ceramic works, according to Maureen Warren, curator of European and American art at KAM.

“The vast majority of those come from China,” Warren said. “That is because the collection is especially strong in Chinese ceramics and also because for the history of ceramics, especially porcelain, China is incredibly important. It also includes works from Korea, Taiwan and Japan, so it’s got quite a wide range.”

The dominant Chinese ceramics that adorn the gallery exist in part due to China’s extremely established global trade in ceramics during and after the Song dynasty. This global trade influence marks one of three themes the first reinstallation and those after seek to reflect.

“Trade is one of the three themes that I’m exploring in the larger reinstallation of that gallery,” Warren said. “This is just the first phase — there’s going to be a second phase. Trade, collecting histories and technology are all themes that are very important.”

“The temporary galleries are our exhibitions that open every semester, that rotate and change all the time,” Warren said. “So you might only have as short as three months or as much as a year to see a particular exhibition before it’s down. But the permanent collection galleries are composed of primarily or entirely objects that belong to Krannert Art Museum, and those stay up a lot longer.”

The permanent collection galleries are prone to minor tweaks and changes; however, the Asian ceramics gallery, a permanent gallery underwent a full reinstallation. The reinstallation has been in the making for an extended period of time, originally intended to be completed under the previous curator of European and American art.

“I was hired in 2005 and immediately, they told me, ‘You know, this is something that we’d like to see happen,’ but as a brand new hire, I needed to become familiar with the collection and get to know the objects and think about the themes and ideas that were important to me for my reinstallation,” Warren said. “So it took me some time to really get to know the collection.”

After Feb. 8, individuals will have the option of registering online for a visitation time slot or simply walking into KAM. However, there are still strict rules implemented to ensure the safety of everybody, according to Julia Nucci Kelly, assistant director for marketing and communications at KAM.

“You have to sign in, give your contact information, and you have to wear a mask,” Kelly said. “We allow around 20 people per hour to come through the museum and they can be individuals or in small groups as long as they keep (their) distance from people. We have hand sanitizer throughout the building.”

During the spring semester, KAM will be operating on Tuesday through Saturday from 10 a.m. to 4 p.m., with Thursday operating until 7 p.m to make it easier for students to attend. Spring operations are nearly identical to fall operations, outside of the brief period for essential activities only.

“We had a lot of things in place to allow us to reopen in the fall, and the reason that we had to close was because of the governor’s change of mitigation stage,” Kelly said. “He closed all the museums in the state. So we would have reopened, but this year the University asked us to just stay closed just a little bit longer until we’re done with the waiting period and our students can go through their early semester testing.”

While all of the events at KAM are currently virtual on the website, there will be available in-person experiences. When students feel comfortable visiting, they can access a page on the website that documents various health and safety measures to keep in mind.

“I think visiting the museum itself is a really perfect in-person experience,” Kelly said. “It really is one of the special things that you can do on campus that’s not virtual.”