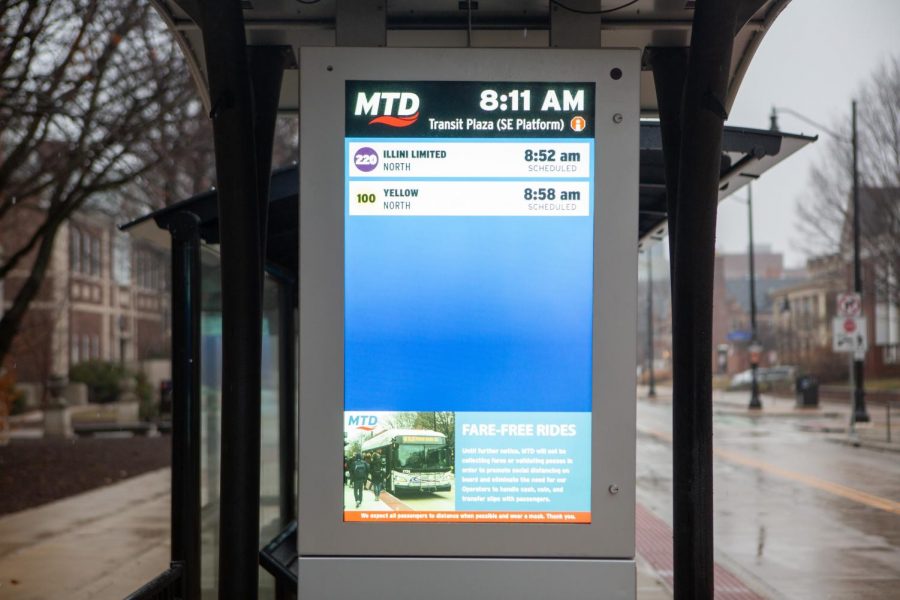 An MTD terminal on Wright Street informs riders when the next buses are coming on Sunday morning. MTD has recently reduced their service.

As another semester begins in the midst of a global pandemic, students return to a campus with limited transportation services.

The Champaign-Urbana Mass Transit District has reduced service for its campus-based routes to around 40% of what it normally provides as a result of the University’s funding issues.

Lowa Mwilambwe, associate vice chancellor for Auxiliary, Health and Wellbeing, said that these reductions were made in response to lower bus ridership and less students on campus.

“We looked at the big picture, the ridership at every level,” Mwilambwe said. “And those decisions were made based on what is best for the University.”

University students, faculty and staff make up around 75% of MTD’s ridership, according to Amy Snyder, chief of staff for MTD.

However, MTD has seen a large drop in ridership as a result of more students attending class remotely due to the pandemic.

“Overall for the service year, ridership is down about 75% across the system,” Snyder said. “We are running more community riders than we are student riders.”

Since the start of the pandemic, the University has had difficulty paying for the campus routes that MTD is contracted to service.

Both of these discounts led to service reductions for MTD’s campus routes.

Since then, the University and MTD have renegotiated the price and the level of service for the campus routes covered by their service contract.

For providing campus service from January to June, the University has agreed to pay MTD $831,674.23, significantly less than the $2,972,965.30 that they previously agreed on, according to an MTD board packet from December.

While all students were required to pay the campus fee this semester — a change from last fall — the University lowered the fees as a result.

This semester, the University charged a $23 transportation fee per student, less than half of the $62 it normally charges.

“This time around, we decided that we are going to charge everybody, but it’s going to be a reduced fee,” Mwilambwe said.

Mwilambwe notes that these reductions are part of a larger balancing act between reducing fees and providing adequate services.

As a result, the University had to make “strategic decisions” about what fees and services to cut.

“There’s a cost to everything that we do, and that’s really the challenge: How do you balance the two?” Mwilambwe said.